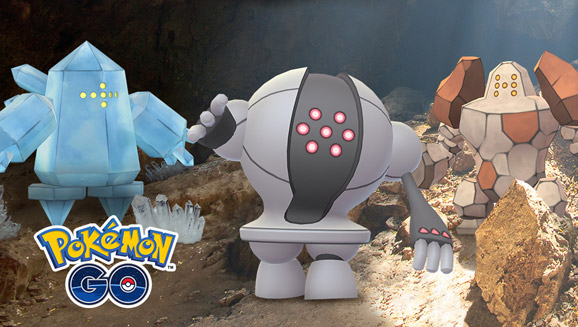 Kyogre Raid Battles and the Water Festival have left Pokémon GO for now, and in the wake of water is ice! The Legendary Pokémon Regice is now appearing in Pokémon GO Raid Battles for the first time, and Regirock and Registeel are sure to be close behind it. The Ice-type Regice won't be appearing throughout the summer, so make sure to take it on before July 19, 2018.

The Iceberg Pokémon can be caught only with the Premier Balls you earn from defeating it, so you'll need your Pokémon to perform well in battle to maximize your chances. You can participate in Raid Battles even if you're not high-level or if your Pokémon aren't the strongest, but you'll have an easier time if you prepare. Check out our guide to training Pokémon in Pokémon GO to get your team up to speed, and then read on for some tips specific to Regice.

Ice-type Pokémon like Regice are weak against Fire-, Fighting-, Rock-, and Steel-type attacks. Regice's Fast and Charged Attacks can both be Ice-type, but it can also use the Ground-type Charged Attack Earthquake and the Fighting-type moves Rock Smash and Focus Blast. Rock- and Steel-type Pokémon are weak against these attacks, so you'll be safest with a lineup of mostly Fire- and Fighting-type Pokémon. Raid Bosses know one Fast Attack and one Charged Attack like any other Pokémon, so you can adjust once you see which attacks the Regice you're facing knows.

Fire-type Pokémon become more powerful during sunny summer weather. Start your team with strong Fire types like Flareon, Moltres, Entei, and Blaziken, especially when the weather suits them. Charizard is another great choice, and it'll be even stronger if it knows Blast Burn from the May Community Day featuring Charmander. Charizard and Moltres will take more damage than the other options from Ice-type attacks and less damage from Earthquake, so pay attention to Regice's moves.

Lead off with Fighting-type Pokémon if you're battling in the windy weather that empowers them. Machamp and Hariyama are on top of the Fighting-type weight class for this bout, so hopefully you stocked up on them to take on other Raid Bosses like Tyranitar. Consider powering some up now if you haven't—both Regirock and Registeel are also weak against Fighting-type attacks, so it's a good time to build a strike team of powerful Fighting-type Pokémon. Heracross is another solid choice, while Breloom's high damage potential is likely to be negated by its weakness to Ice-type attacks in this battle.

Several other Pokémon stand out once you've exhausted your higher-CP Fighting- and Fire-types. A Tyranitar that evolved during the recent June Community Day featuring Larvitar can deal fantastic damage with the combination of Smack Down and Stone Edge. (But don't bother to use Golem this time—it's weak against all of Regice's potential attacks.) Regice's weakness to Steel-type Pokémon is hard to exploit efficiently, but don't be afraid to use a powerful Scizor or Metagross if you have one. This is one encounter where you shouldn't use Dragonite or Rayquaza to fill out your team—they're very weak against Ice-type attacks.

Catch More than A Cold

You may not get many Premier Balls to catch Regice once you've defeated it, so make each one count. Use a Golden Razz Berry before each throw, and be sure to stock up on them beforehand by defeating other Raid Bosses.

The odds of capturing Regice are greatest while the target ring is at a small enough diameter to score Nice, Great, or Excellent Throws, and throwing Curveballs can improve your chances further. But work within your abilities—if you don't think you can hit Excellent Curveballs reliably, aim for Nice or Great Throws rather than risk missing the target ring completely.

You may waste your Premier Balls if your target is moving around when you throw them. Wait for Regice to start acting up and for the target ring to disappear while it's a size you're comfortable throwing into, then time your throw so that the Premier Ball lands as the target ring reappears.

Legendary Pokémon are tough to catch, so don't be discouraged if Regice gets away the first time you defeat it. Stock up on useful items like Max Potions and Max Revives and try again later with some friends. Good luck with your next Raid Battle, and remember to check back at Pokemon.com/Strategy for more Pokémon GO, video game, and Pokémon TCG tips.