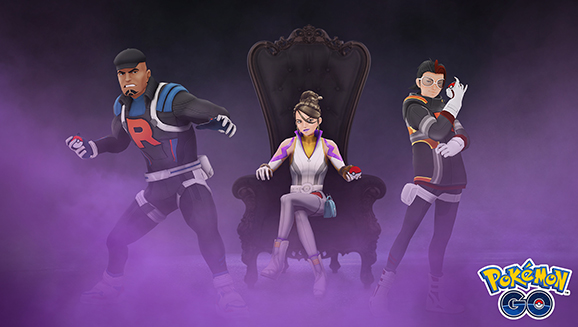 Learn which Pokémon the Team GO Rocket Leaders may use in battle and how best to counter them.


Battling a Team GO Rocket Leader is a lot more challenging than taking on a Team GO Rocket Grunt. But with some key knowledge and shrewd strategy, you can send Sierra, Cliff, and Arlo packing. When you do, you'll be able to catch Sierra's Shadow Drowzee, Cliff's Shadow Cubone, or Arlo's Shadow Exeggcute.

Before diving into strategies specific to each Team GO Rocket Leader, here are a few general tips that can help you face all three.

It's also worth noting that the Team GO Rocket Leaders' Pokémon can have any Fast Attack or Charged Attack currently available to that Pokémon, but you won't know which attacks they'll have until you're battling them, so try to familiarize yourself with each Pokémon's available attacks and pick your own Pokémon team accordingly.

When battling the Team GO Rocket Leaders, it's best to bring Pokémon with two Charged Attacks to give yourself more chances to exploit the weaknesses of opposing Pokémon.


How to Defeat Sierra

Your Pokémon lineup against Sierra should be comprised of one Fighting-type Pokémon, one Bug-type Pokémon, and either a Water-type or a Ground-type Pokémon. Each of your three Pokémon should have a Fast Attack and Charged Attack that matches the Pokémon's type to enable them to benefit from the same-type attack bonus.

Lead with your Bug-type Pokémon against Drowzee, and be ready to switch it out quickly depending on which Pokémon Sierra sends out second. That Bug-type Pokémon should ideally have a Charged Attack that charges quickly, enabling you to force Sierra into using her two Protect Shields early.

Remember to power up your Pokémon as much as possible prior to challenging Sierra. As a Team GO Rocket Leader, all of her Pokémon will have substantial CP, so it's dangerous to assume that a type advantage will be all it takes to defeat her. By bringing Pokémon of the correct types and with the right attacks, you should be able to defeat Sierra and rescue her Shadow Drowzee.


How to Defeat Cliff

If you choose to lead with Torterra, you can teach it a Ground-type Charged Attack and potentially score a quick knock out on Cliff's second Pokémon after you've swept Cubone aside.

In addition to teaching your Pokémon a second Charged Attack of a different type than its first Charged Attack, take the time to power up your Pokémon before taking on Cliff. Team GO Rocket Leaders have Pokémon with high CP, so even with a type advantage, they won't be easy to overcome.

There's no denying that Cliff has some powerful Pokémon on his team. His third Pokémon—Charizard, Tyranitar, or Swampert—will be particularly challenging to face. But with a little planning and the right Pokémon, you should be able to emerge victorious and save Shadow Cubone without too much trouble.


How to Defeat Arlo

Leading with an Ice-type Pokémon will counter both Exeggcute and whichever Pokémon Arlo chooses to use second. All three of Arlo's potential second Pokémon are especially weak to Ice-type attacks, so you should be able to knock out both his first and second Pokémon with a strong Ice-type Pokémon. It's always a sound strategy to try to send off your first two Charged Attacks as quickly as possible to blow through your opponent's Protect Shields, so try to choose a Pokémon with a Charged Attack that powers up quickly.

Steelix could pose a challenge for your Fire-type Pokémon depending on which attacks it utilizes. Steelix's Electric-type Fast Attack Thunder Fang would be super-effective against a Fire- and Flying-type Pokémon like Charizard, but a Fire-type Pokémon like Entei wouldn't be in as much danger. Steelix's Ground-type Charged Attack Earthquake, however, would be super-effective against Entei while not posing a significant threat to Charizard. Try to consider all of these scenarios when selecting your Pokémon.

Regardless of the Pokémon you choose for your team, if you can spare the Candy and Stardust, it helps to power up your team before going into battle. Arlo's Shadow Pokémon will have substantial CP, so they'll present a challenge even if you choose Pokémon with an advantageous matchup. Powering up your Pokémon might make the difference between a Pokémon fainting or sending off an additional Charged Attack—and sometimes, that can be all it takes to decide the winner of a battle.

Wondering what to do with your newly acquired Shadow Pokémon? Learn more about Shadow Pokémon in Pokémon GO. The Team GO Rocket Leaders change their Pokémon every few months, so check back regularly for new recommendations and strategies.