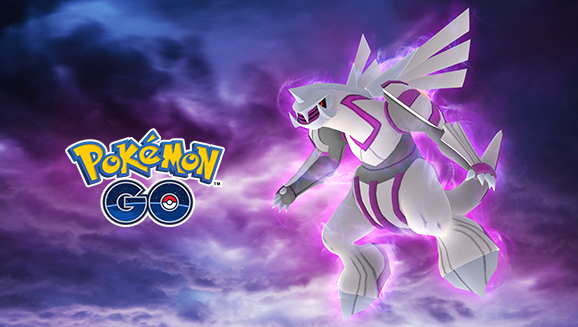 Prepare to add a powerful Legendary Pokémon to your battle party when Palkia joins Pokémon GO Raid Battles beginning on January 29 at 1:00 p.m. PST. In the mythology of the Sinnoh region, this incredible Pokémon is said to have the ability to distort space—and its fearsome Dragon-type attacks are sure to further its legacy in Pokémon GO. The Spatial Pokémon can tear up battles like few others, so make sure to catch one before it disappears from Raid Battles on February 28 at 1:00 p.m. PST.

To catch Palkia, you can use only the Premier Balls you earn from defeating it, so it's crucial to be prepared. Help your team take over the Gym before the raid starts, battle alongside your friends, and pick Pokémon that will perform well in battle to maximize your chances. Check out our guide to training Pokémon in Pokémon GO to get your battle party up to speed, and then read on for some tips specific to the Spatial Pokémon.

Palkia is one of only two known Water- and Dragon-type Pokémon—a combination of types that's particularly challenging to attack. The Legendary Pokémon is left with weaknesses against only Dragon-type and Fairy-type attacks, and its powerful Dragon-type attacks will be super effective against your Dragon-type Pokémon, too. Palkia will always know a Dragon-type Fast Attack, and it will also know one of these Charged Attacks: 1) the Fire-type Fire Blast, 2) the Water-type Hydro Pump, or 3) the Dragon-type Draco Meteor.

Most of the best damage dealers for this encounter are Dragon-type Pokémon, so load up your party with them if your priority is earning as many Premier Balls as possible. Rayquaza's ability to deal sky-high damage with Dragon Tail and Outrage is unmatched, while the damage Dragonite deals with the same moves is next best. (Beware that Dragonite will be slightly less effective if it instead knows its Community Day move, Draco Meteor.) Palkia itself (if you've already caught one), followed by Latios and Salamence, rounds out the top flight of Dragon types for maximizing damage. Each of these Pokémon resists both Fire Blast and Hydro Pump, which somewhat makes up for their guaranteed weakness to Palkia's Fast Attacks.

The shortage of Fairy-type attacks makes a Palkia that knows Draco Meteor trickier to handle. Dragon-type Pokémon are still the best source of damage, but you can save yourself some healing items by instead deploying Pokémon that aren't weak against Dragon-type attacks. Gardevoir and Togekiss are the strongest Fairy-type attackers available, but both will need to combine the Fairy-type Charged Attack Dazzling Gleam with a Fast Attack of a different type. Gyarados and Groudon can both learn the Fast Attack Dragon Tail and have high stats, but they'll still take enough damage from Draco Meteor that they're probably better choices for filling out your party once you run out of high-CP Dragon-type Pokémon than for replacing them completely.

While many players are probably experiencing the Rainy or Snow weather this time of year, keep an eye out for Palkia if it's Cloudy or Windy near you. Your Fairy-type attacks will deal more damage when it's Cloudy, and Dragon-type attacks will deal bonus damage when it's Windy—both your attacks and Palkia's. Your Legendary quarry will also be more powerful if you catch it during Rainy or Windy weather, which will help you save on that rare Palkia Candy if you choose to train a Palkia for battle!

Make each Premier Ball you earn count by aiming carefully, because you'll have a limited amount to catch Palkia with once you've defeated it. You can earn extra Premier Balls if you defeat Palkia alongside your friends, so be sure to bring them with you. Use a Golden Razz Berry before each throw, and remember to stock up on them beforehand by defeating other Raid Bosses.

The odds of capturing Palkia are greatest while the target ring is at a small enough diameter for you to score Excellent Throws, and throwing Curveballs can improve your chances further. But work within your abilities—if you don't think you can hit Excellent Curveballs reliably, aim for Nice Throws or Great Throws rather than risk missing the target ring completely.

Be careful not to waste your Premier Balls by throwing while Palkia is moving around. Wait for it to start acting up and for its target ring to disappear, then time your throw so that the Premier Ball lands as the target ring reappears.

Palkia is a tough Pokémon to catch, so don't be discouraged if it gets away the first time you defeat it. Stock up on useful items, such as Max Potions, Max Revives, and Golden Razz Berries, and try again later with some friends. Good luck with your next Raid Battle, and remember to check back at Pokemon.com/Strategy for more Pokémon GO, video game, and Pokémon TCG tips.