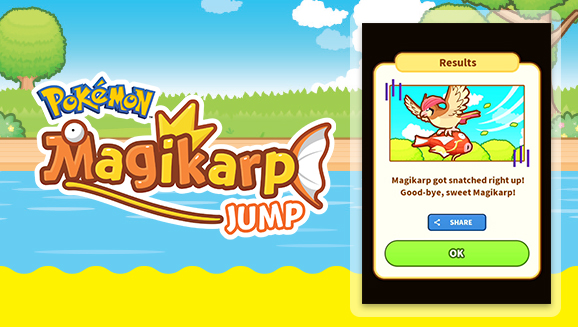 The Many Failures of Magikarp

It's no secret that Magikarp is the weakest, most pathetic, and all-around saddest Pokémon in the Pokémon universe—and that's why we all love it so much! The new Pokémon: Magikarp Jump game for iPhone, iPad, and Android devices puts all of the Pokémon's best—and worst—traits on full display as it feebly attempts feats of skill for your enjoyment. It should come as no surprise that Magikarp fails in this endeavor...a lot. The poor thing is so weak, it can't even outjump other Magikarp. It forlornly swims back and forth, desperately hoping that on its next jump, it can finally reach new heights. (Spoiler alert: It won't.)

But that's where you come in, caring Trainer! You're the poor Magikarp's only hope, and you have a responsibility to train and care for the lowly Pokémon until it can make that next big jump (only to crash down so hard it creates a Magikarp-shaped hole in the ground... Yeah, let's move on). To be a good Trainer, you not only have to check in on Magikarp once in a while, you also have to make decisions for the pitiful Pokémon. That means knowing what kind of mischief Magikarp could stumble into and steering the Pokémon away from all dangers. Of course, the nice thing about raising Magikarp is that if you mess up, there are millions more of them waiting to take the last one's place. Seriously. They're everywhere. Millions.

Before we move on, remember that you can download the Pokémon: Magikarp Jump game for free from the App Store and from Google Play. And if you're looking for a little extra motivation, get “The Magikarp Song” stuck in your head for a few days.

Let's cut to the chase and look at how your Magikarp will inevitably try to do something totally dumb, and what you can do to prevent catastrophes. Remember, without a Trainer like you, it's sink or swim (or jump)! 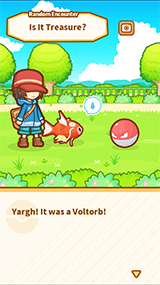 Trainers and Pokémon alike have been confusing Voltorb with a Poké Ball for nearly 20 years. As the “Is It Treasure?” event shows, Magikarp still hasn't learned the lesson. As often as not, when Magikarp stumbles on the sphere, Voltorb will shock the puny Pokémon into oblivion, and you'll have to go back to the pond to catch a new one. Of course, Magikarp may luck out and open a regular old Poké Ball filled with coins.

Be a Good Trainer: If you've just caught a fresh Magikarp, go ahead and approach the Poké Ball. But if your Magikarp has reached a pretty high level, walk away and live to jump another day. 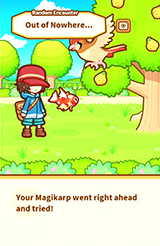 Despite Magikarp's being, you know, the Fish Pokémon, it's somehow tempted by Berries up in trees. This makes no sense, but Magikarp is not the sharpest Pokémon in the pond. In the “Out of Nowhere…” event, it's up to you whether Magikarp will make the leap to snag a Berry from a nearby tree. A safe jump means a huge reward of JP. A not-so-safe jump means—OH MY, WHERE DID THAT PIDGEOTTO COME FROM. And just like that, Magikarp is gone for good.

Be a Good Trainer: Large JP boosts can be hard to come by, and the reward for a successful jump can be big. Go ahead and let Magikarp fly unless its level is nearly maxed. If it fails, just think about how happy you made that Pidgeotto and move on. 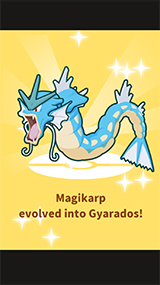 To tell the truth, the only great thing about Magikarp is that it will eventually evolve into Gyarados. That's about it. In Pokémon: Magikarp Jump, you can trigger this Evolution only once, because again, Magikarp is mostly a failure. Tap on Magikarp a whole bunch until you break the Everstone you didn't know it was holding. Then when Magikarp reaches Lv. 20, it'll finally get big and awesome. When you trigger Magikarp's Evolution is entirely up to you (as long as Magikarp can reach Lv. 20), but know that once the Pokémon evolves, it's no longer interested in jumping at your command, and you'll have to start over.

Be a Good Trainer: Go ahead and evolve Magikarp just to see what happens. We recommend you select a particularly wimpy Magikarp to evolve, which is saying something. Or, perhaps if you're lucky enough to find a shiny Magikarp, its evolved form may be even more impressive. 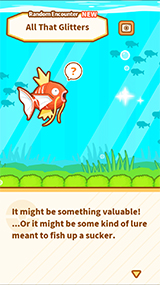 In case we haven't made it clear by now, the feeble Magikarp is not particularly bright. It's easily distracted by shiny objects in its path, as you'll see in the “All That Glitters” event. Fortunately, this time, Magikarp isn't likely to get electrocuted or bitten, or to experience any other calamity. If you're lucky, Magikarp's investigation will reveal a handful of Diamonds. If not, it'll just lose all the hard work it put in during the last training session it just had.

Be a Good Trainer: Dive for Diamonds every time! They can be a little hard to come by, and the downside of losing all the JP from your last Training event is not awful, especially if it's a low-level event such as “Sandbag Slam” or “Jump Counter.” Magikarp can't tell the difference between a Diamond and a ball of glass anyway. 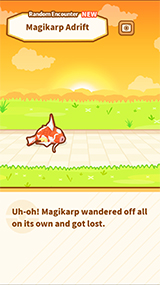 The temptation to let Magikarp wander away on its own—perhaps for good—can be pretty strong, and a caring Trainer would never do that (we hope). But in the “Magikarp Adrift” event, the poor Pokémon could still lose its way and need a little help getting home. Do you have it stay put? Or do you send it off down the path the hope of finding your familiar face, knowing it's probably just going to get lost again sometime later? If you have it stay where it is, the mayor will eventually find it and give you a slight JP reward. If you have it flop away, Magikarp might earn even more JP, or it'll lose everything it gained from its last session.

Be a Good Trainer: Yes, it's Magikarp, and yes, there are plenty of others, so what's the big deal if it wanders away? But you're not getting rid of the Pokémon that easily. You might as well have the Pokémon stay put and let the mayor come across it. You won't get as much JP, but you won't lose any, either. Don't worry—there are plenty of other ways for your Magikarp to totally fail. 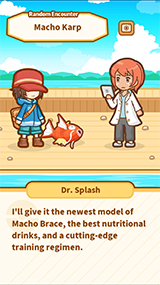 When you're training Magikarp, losing is all part of the experience. It's most of the experience, really. What we're trying to say is that Magikarp is kind of a loser. But you're not the only one who sees prodigious potential in the puny Pokémon, even after it has suffered another loss. In the “Macho Karp” event, an ambitious (if slightly creepy) scientist offers to lend your Magikarp a hand and train the Pokémon using a Macho Brace. In a weird twist, the so-so scientist's most successful outcome is your worst, as Magikarp will evolve into Gyarados and take off!

Be a Good Trainer: Evolving Magikarp is cool. Gyarados is cool. Always take the chance to evolve Magikarp. If Magikarp doesn't evolve, its maximum level will increase by one, making the weak Pokémon just a little less weak. But make no mistake—it's Magikarp, so it'll still be weak. 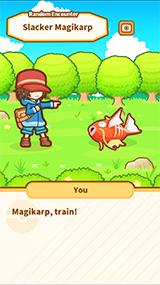 Exercise is good for the body and mind, but even Magikarp gets tired of it from time to time. If, as in the “Slacker Magikarp” event, the Pokémon isn't feeling it, it's up to you whether to scold the Pokémon back into shape. If you don't, well, not much happens, and don't expect to be vastly rewarded for your passivity. But if you do choose to scold Magikarp, it may respond positively, rewarding you with extra JP or even Training Points! But seeing as how this is Magikarp, it may continue in its lazy ways, and you could lose everything you just trained for.

Be a Good Trainer: Magikarp is there to jump at your bidding. Indeed, what other purpose could it possibly have? Let it know who's boss around here! It might not listen, but if it does, the rewards can be pretty great.

Look, no matter what you do, Magikarp will continue to stare back at you with that same blank look on its face. Love every one of your Magikarp because they won't love you back. We haven't even covered all the ways you could lose Magikarp, because Magikarp is the kind of Pokémon who keeps discovering more ways to lose. Train each one to reach new heights and conquer more challenges. Eventually you will develop the best Magikarp ever (or it'll be snatched away by a Pidgeotto…these things happen). Just enjoy all the weird and wonderful events in Pokémon: Magikarp Jump. Good luck, Trainers—you're gonna need it! 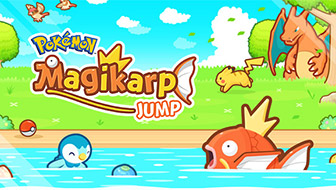 Train your Magikarp to soar as high as possible in the fun new app for iPhone, iPad, and Android devices.

Train your Magikarp to soar as high as possible in the fun new app for iPhone, iPad, and Android devices.