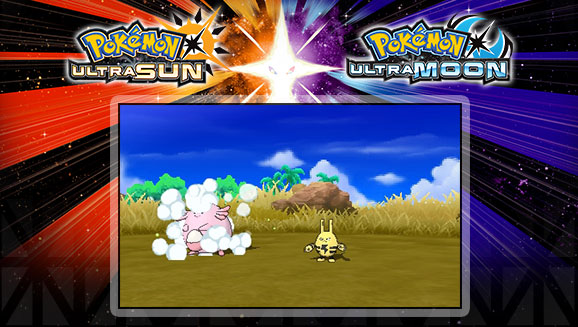 Special Pokémon Answer the Call for Help in SOS Battles

Battles against wild Pokémon can be different in the Alola region than in other regions. After you complete your first trial, you'll start to find that wild Pokémon may initiate SOS battles by calling for help when they're in trouble. SOS battles start as normal wild Pokémon encounters, but they expand into a two-on-one affair when another Pokémon suddenly joins the fray.

It might seem like a nuisance to have new challengers appear while you're already battling wild Pokémon, but these special encounters are the key to acquiring rare and valuable Pokémon. Newly called Pokémon will be more likely to be Shiny, to have their Hidden Ability, and to have higher potential as more of them enter battle. And if you're looking to finish your Pokédex, SOS battles are the only way you'll be able to track down some Pokémon in the wild.

Read on to find out more about how you can make the helper Pokémon in SOS battles help you.

The key to making the most of SOS battles is building long chains of Pokémon called in to help. Under the right conditions, a single Pokémon will continue to call for help over and over as long as you knock out its partner. It's a good idea for your own Pokémon to be strong enough to endure long battles, and to have the strength to quickly knock out the Pokémon that get called so that new ones can take their place. We'll refer to a wild Pokémon calling for help as a “caller.”

The first step in starting a chain is tracking down a wild Pokémon. Almost any wild Pokémon will work, regardless of how the battle was initiated. Surfing, fishing, walking in tall grass, and even being attacked by Pokémon hiding in bushes or flying overhead can lead to an SOS battle. You'll then want to encourage the wild Pokémon to call for help as often as possible. Start by reducing their health as much as you can. Ideally, you'll want to have your Pokémon use False Swipe or Hold Back. Both moves have a special property: instead of causing the target Pokémon to faint, they leave their target with 1 HP. You can teach many Pokémon False Swipe by using TM54 (received after completing the first Grand Trial). You can further increase the odds of Pokémon calling for help by having a Pokémon with the Intimidate, Unnerve, or Pressure Abilities active and by immediately using supereffective moves on new allies called into battle.

Next, you'll want to use the Adrenaline Orb item. Wild Pokémon in Pokémon Ultra Sun and Pokémon Ultra Moon will normally call only one ally per battle—but they'll keep calling allies for help even after their first ally is defeated if you use an Adrenaline Orb. You'll be able to purchase Adrenaline Orbs at a low cost from Poké Marts all over the Alola region after completing three trials. It only takes one Adrenaline Orb to increase the odds of wild Pokémon calling for help for the rest of the battle, even if you switch to a new caller.

If the wild Pokémon calls for help, great! Just knock out the new Pokémon, and your chain is going. If the wild Pokémon doesn't call for help, or if a call for help goes unanswered, you'll need to find a way to pass the turn. One great way to pass turns is by using another Adrenaline Orb. Using more Adrenaline Orbs won't increase the odds of the Pokémon calling for help, but it does pass your turn. And if you've already used an Adrenaline Orb during battle, using another won't further reduce your inventory of them.

Once you find the Pokémon you're looking for, it's time to make the catch. We suggest using Thunder Wave to paralyze your target Pokémon or a move such as Sleep Powder or Spore to put it to sleep to prevent it from calling for help. Knock out any remaining allies and weaken your target Pokémon, then catch it as you normally would. Mission accomplished!

When a Pokémon calls for help, it will normally call another Pokémon from its Evolution line. Wild Pichu will call other Pichu for help, and sometimes Pikachu will appear instead. Some Pokémon can also call Pokémon from other evolutionary lines. Instead of another Pichu or a Pikachu, Pichu's call for help might also be answered by a Happiny. When you see a weather effect on the field before entering battle, you'll often find Pokémon from different evolutionary lines in SOS battles. Plus, look out for some decisively unhelpful Pokémon that appear after calls for help from certain Pokémon—notice what happens when a Mareanie appears to “help” a Corsola!

Pokémon that are burned, poisoned, frozen, asleep, or paralyzed will never call for help. Be careful not to use moves like Flamethrower or Thunderbolt that might inflict a status condition on a Pokémon you want to call for help. Remember, you won't be able to throw a Poké Ball until only one opponent remains, just like in the Horde Battles from Pokémon Omega Ruby, Pokémon Alpha Sapphire, Pokémon X, and Pokémon Y.

Finally, remember that when a Pokémon runs out of PP for each of its moves, it will use Struggle, which always deals recoil damage equal to 1/4 of the user's maximum HP. Most Pokémon will have plenty of PP available, but Struggle can come into play when you're searching for Shiny Pokémon or rare Pokémon like Castform. Make sure to weaken a new wild Pokémon and knock out the original if you're chaining for a long time to avoid having your caller make itself faint from recoil damage from Struggle! Keep in mind that some other moves, such as Take Down and Double-Edge, can also cause wild Pokémon to knock themselves out and break your chain.

In addition to being the only way to capture certain Pokémon, SOS battles are the best way to get some impressive Pokémon.

Start off by trying to get a wild Pokémon to call around 30 new allies into a single battle. That will maximize the odds that each new Pokémon called into battle will have its Hidden Ability. If you're looking to capture a Pokémon with its Hidden Ability, you might want to teach one of your own Pokémon a move that changes the target's Ability, like Worry Seed or Skill Swap. You'll be able to see what your target's original Ability was when the move connects, so you'll find out whether the Pokémon has the Ability you want or not. The Pokémon's Ability will revert to normal after the battle.

You'll need to build a longer chain to optimize the potential of incoming Pokémon. After a few dozen helpers, each new Pokémon is guaranteed to have its maximum potential in several stats! This can be a great shortcut toward hatching powerful Pokémon for competitions.

Good luck tracking down rare and valuable Pokémon using SOS battles! And be sure to keep an eye on Pokemon.com/Strategy for more Pokémon Ultra Sun and Pokémon Ultra Moon strategy articles, as well as Pokémon TCG and video game tournament coverage and analysis.