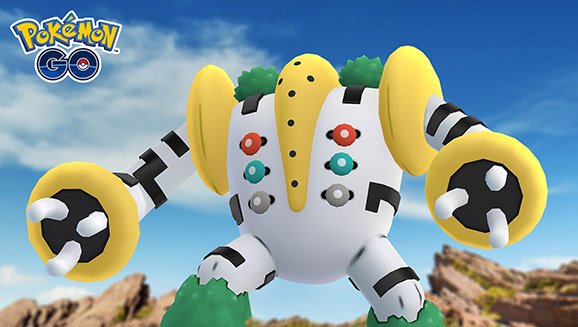 If you didn't encounter Regigigas as part of its Special Research event, you can still add it to your collection by participating in Pokémon GO Raid Battles. The Colossal Pokémon will replace Mewtwo in EX Raid Battles starting with bouts on November 19 and November 20. The first invitations to these events will go out on November 9.

EX Raid Battles are only available to Trainers who receive an invitation to compete. You can become eligible to receive an EX Raid Pass when you win a Raid Battle at a qualifying Gym. You'll be able to see which Gyms can host an EX Raid via a handy tag when you look at the Gym details. EX Raid Passes will give you the date and time when you'll be able to challenge Regigigas, so mark your calendar and prepare your Pokémon for a difficult battle.

You won't get many chances to catch Regigigas, so it's important to make the most of your opportunities. The Premier Balls you earn when defeating Regigigas will be the only Poké Balls you can use to catch it, so it's crucial to be prepared. Maximize your chances by helping your team take over the Gym before the raid starts, battling alongside your friends, and picking Pokémon that will perform well in battle. Make sure to learn how to train Pokémon in Pokémon GO to get your team up to speed, and then read on for some tips for facing Regigigas.

Lobby up with your teammates. If there are enough Trainers at your location to handily defeat Regigigas, you might want to consider breaking off into smaller lobbies full of members of the same team to increase the amount of Premier Balls each player earns. You'll only get one shot at Regigigas each time you earn an EX Raid Pass, so it pays to put a little extra effort into maximizing your chances!

You'll earn a limited number of Premier Balls by defeating Regigigas, and you must use these to catch it, so take careful aim to make each one count. If you battle alongside your friends, you can earn extra Premier Balls, so be sure to bring friends with you. Using a Golden Razz Berry before each throw will vastly increase your chances of success. You can stock up on them beforehand by defeating other Raid Bosses.

Your chance of catching a Pokémon is greatest when the size of the target ring is small enough for you to score Excellent Throws. Throwing Curveballs can improve your chances even more. But work within your abilities—if you don't think you can reliably make Excellent Curveball Throws, aim for Nice Throws or Great Throws rather than risk missing the target ring completely.

Lastly, don't waste your Premier Balls by throwing while the Pokémon is moving around. Wait for it to start acting up and for its target ring to disappear, then time your throw so that the Premier Ball lands as the target ring reappears.

Good luck with your next EX Raid Battle, and remember to check back to Pokemon.com/Strategy for more Pokémon GO, video game, and Pokémon TCG tips.