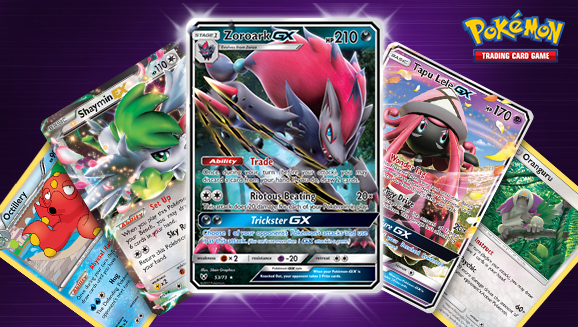 Drawing cards might not sound as exciting as making damage counters rain with devastating attacks, but keeping a hand full of useful resources is key to winning consistently. It's critical to attach an Energy and play a Supporter card virtually every turn, and it's tough to pull that off without some extra help. Many of the strongest decks in the Pokémon TCG include card-drawing Pokémon to ensure the deck's attackers don't run out of steam. And as you'll see, this group is growing with the powerful new Zoroark-GX from the special Pokémon TCG: Shining Legends expansion.

Card-drawing Pokémon use Abilities to help fortify your hand. They can help you dig for a Supporter card if you don't have one, and they free you up to play more Supporters that do useful things other than drawing cards, like Guzma or Skyla. These Abilities are also the best answer to cards like N that can reduce the size of your hand. But watch out for effects like Garbodor's Garbotoxin Ability or Greninja's Shadow Stitching attack, which shut off Abilities.

Let's take a look at several popular Pokémon whose Abilities give your deck some all-important draw power.

The latest champion of card drawing is Zoroark-GX, an all-around incredible Pokémon. Its Riotous Beating attack can easily be used in most decks because it requires only two Colorless Energy. Its impressive 210 HP makes it tough to Knock Out—even in the face of cards that force a Benched Pokémon into battle, like Guzma, or Lysandre in the Expanded format. And most importantly, it can help you draw cards each turn using its Trade Ability.

Trade: Once during your turn (before your attack), you may discard a card from your hand. If you do, draw 2 cards.

Trade's discard requirement can be a little tricky. Cards like Brigette and Alolan Vulpix are much more valuable in the early part of the game, so discarding them once you're rolling can be good. But you'll also find yourself in more challenging situations where you'll be forced to decide whether to discard useful cards to keep drawing. The Supporter card Mallow can ease your decision-making—it lets you search your deck for any two cards and put them on top, and then you can draw them immediately with Trade.

Zoroark-GX is a Stage 1 Pokémon, so you should include at least a couple of Zorua in your deck to reliably get it into play. Zoroark-GX really stands out in the Expanded format, where competitors sometimes use it as a primary attacker and include three or four copies in their decks. You might also want to include Zoroark with its Stand In Ability, which can make Guzma and Special Conditions much easier to combat. The combination of solid offense and support these cards provide is tough to match. 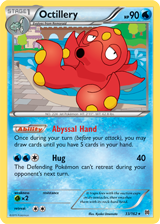 Zoroark-GX isn't the only Pokémon that can help keep your hand healthy. The Abyssal Hand Ability makes Octillery one of the most popular alternatives.

Abyssal Hand: Once during your turn (before your attack), you may draw cards until you have 5 cards in your hand.

You can potentially draw up to five cards each turn with Abyssal Hand, making it the best choice to refill your hand without risking a two-Prize Knock Out, since Octillery isn't a Pokémon-GX. Cards that reduce the size of your hand, like Ultra Ball, are key to maximizing Abyssal Hand's value. Perhaps its greatest benefit is foiling the shenanigans of N, which makes each player shuffle their hand away and draw a card for each of their remaining Prize cards. With Octillery on the field, there's no reason not to pull that trigger even if you have only one Prize card remaining, since you'll quickly be able to draw back into a comfortable situation.

Decks built around Gardevoir-GX and even Greninja BREAK pair especially well with Octillery. You'll normally want no more than a single Benched Octillery—its Hug attack is rarely worth using, and Abyssal Hand is tricky to use more than once per turn. With only 90 HP, Octillery is easy prey for Guzma, so you may want to include cards like Super Rod and Rescue Stretcher in your deck so you can retrieve it if it gets Knocked Out. 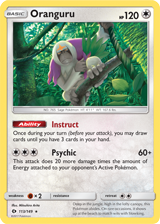 Oranguru has an Ability that is similar to Abyssal Hand.

Instruct: Once during your turn (before your attack), you may draw cards until you have 3 cards in your hand.

Instruct is harder to use than Abyssal Hand because it only lets you draw up to 3 cards instead of 5. It takes some serious finagling to get your hand size low enough to use Instruct, so Oranguru tends to pair best with decks that discard aggressively, like Ho-Oh-GX, Volcanion, and Night March (in Expanded). Oranguru's advantage over Zoroark-GX and Octillery is that it's a Basic Pokémon. It can be played in a single turn, and you can get away with including only a single Oranguru in your deck if you're short on space. 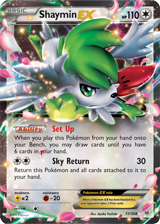 Shaymin-EX is only available in the Expanded format, where it's so key that all decks should be built with its presence in mind.

Set Up: When you play this Pokémon from your hand onto your Bench, you may draw cards until you have 6 cards in your hand.

Shaymin-EX is a high-risk, high-reward card often selected for speedy strategies like those seen in Night March and Darkness-type decks. Set Up can help you immediately draw a bunch of cards, making the potential reward significant. It's not unheard of to see players go through half of their deck on the first turn of a game using several Shaymin-EX. However, once Shaymin-EX is sitting on your Bench, it can be a drawback—it provides no further support after you play it, and its meager 110 HP makes it an easy two-Prize target for Guzma or Lysandre. At least its Sky Return attack can help in a jam—for a Double Colorless Energy, it can return itself to your hand, along with all cards attached to it. 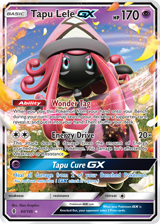 We would be remiss not to mention Tapu Lele-GX from Sun & Moon—Guardians Rising. It can't draw cards directly like the others, but it can be used to find card-drawing Supporters like N and Professor Sycamore.

Wonder Tag: When you play this Pokémon from your hand onto your Bench during your turn, you may search your deck for a Supporter card, reveal it, and put it into your hand. Then, shuffle your deck.

It's little wonder that Tapu Lele-GX quickly became one of the most important cards in the Pokémon TCG tournament environment. Its Wonder Tag Ability ensures that you can get the best Supporter card for any situation, giving you easy access to the varied effects of cards like Brigette, N, Guzma, and Skyla. Its strengths don't stop there: its 170 HP is enough to survive an attack from many Pokémon-GX (particularly since it has no Weakness), its Energy Drive attack can potentially do hefty damage starting at only two Colorless Energy, and even its Retreat Cost is forgiving. And like Shaymin-EX, it can be sought out easily with an Ultra Ball.

While these Pokémon are some of the best around at helping you draw cards, you should also keep an eye out for other Pokémon that fit into a specific deck, such as the Expanded-legal Hoopa-EX or Unown. Try out a deck with Pokémon that can help you draw cards, and enjoy having more options all game long! And don't forget to keep checking back at Pokemon.com/Strategy for more Pokémon TCG and video game strategy, tips, and tournament analysis. 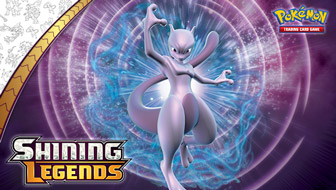 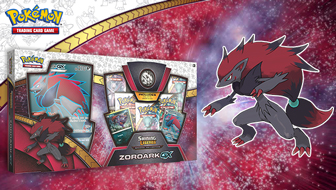 Add the mischievous Pokémon to your deck with the Pokémon TCG: Shining Legends Special Collection—Zoroark-GX.

Add the mischievous Pokémon to your deck with the Pokémon TCG: Shining Legends Special Collection—Zoroark-GX.