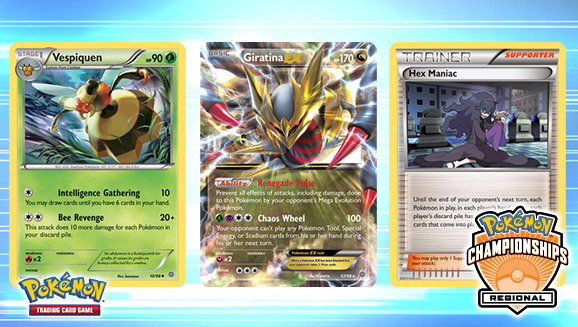 Prepare for the First Major Tournament Events of the 2016 Season!

The 2015 Pokémon TCG World Championships are over, and that means it's time to start up a new season! The Autumn Regional Championships are the first major tournaments of the 2016 Play! Pokémon season, and they will use the Expanded format. Let's take a look at what to expect in this new environment.

In the Expanded format, any cards from the Black & White expansion onward are legal for tournament play, which means we're likely to continue to see a lot of strategies that were used at the 2015 World Championships. Seismitoad-EX and the Night March deck are sure to be top contenders again, and let's not forget about the combination of Keldeo-EX and Blastoise that took the Masters Division by storm. But the release of XY—Ancient Origins and the inclusion of all expansions from the Black & White Series will shake things up quite a bit. 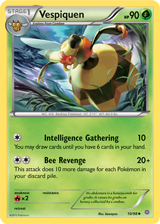 One new card that's getting a lot of buzz is Vespiquen. Its Bee Revenge attack is identical to Flareon's Vengeance attack, which was very successful at last season's Regional Championships. To strengthen the attack quickly, Battle Compressor can get Pokémon from the deck directly into the discard pile, and Unown and Audino both have Abilities that let you discard them. Professor Sycamore, Ultra Ball, and Computer Search offer more discard options. With so many ways to discard Pokémon, it's not unusual to see Bee Revenge taking down Pokémon-EX in one attack—especially since the popular Seismitoad-EX and Primal Groudon-EX take double damage due to Weakness.

Another card to watch out for is Giratina-EX. Many players have found success by using the Forest of Giant Plants Stadium card so they can get Vileplume out right away to shut down Item cards. Then, Giratina-EX's Chaos Wheel attack keeps the opponent from playing Pokémon Tool, Special Energy, and Stadium cards to cause even more disruption. On top of that, the Renegade Pulse Ability protects Giratina-EX from any Mega Evolution Pokémon's attack. It all adds up to one frustrating situation for the opponent. Alternatively, this card can be used as a sidekick for Seismitoad-EX. No matter how it's used, Giratina-EX is a game-changing Pokémon that all players need to plan for. 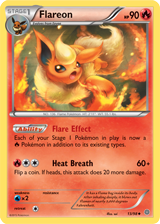 Having a type advantage over your opponent's Pokémon is always a major bonus in the Pokémon TCG, and the new Eevee Evolution cards in the XY—Ancient Origins expansion provide a trio of options. Flareon, Vaporeon, and Jolteon all have Abilities that add new types to all of your Stage 1 Pokémon. This effect doesn't replace any existing types, so if all three are on your Bench, your Active Pokémon is a Fire-type, Water-type, and Lightning-type Pokémon in addition to whatever type is printed on it—and if your opponent's Active Pokémon has Weakness to any of those types, it takes extra damage! Cards such as Vespiquen and Donphan can struggle against popular Mega Evolution Pokémon that have more than 200 HP, so being able to boost damage through Weakness is incredibly useful. The additional types also allow Pokémon to take advantage of type-specific cards. For example, with Flareon's Flare Effect, you can use Blacksmith to attach Energy to any of your Stage 1 Pokémon.

One last important card from XY—Ancient Origins is Hex Maniac. Just about every deck relies on Abilities like Shaymin-EX Set Up to draw lots of cards or Bronzong Metal Links to power up fast—and Hex Maniac can shut them down. This Supporter card can be played defensively to prevent Abilities like Crobat's Surprise Bite, or it can be used offensively to get past barriers such as Aegislash-EX's Mighty Shield. The mere existence of this card will change the way players construct their decks and how they play the game. 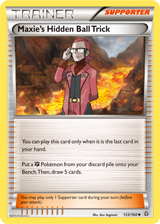 There are several cards from older Black & White expansions to keep an eye on in the Expanded format, but perhaps the biggest one is Archeops. Thanks to Maxie's Hidden Ball Trick, Archeops can come into play on the first turn of the game, and its Ancient Power Ability can shut down any strategy that relies on evolving Pokémon. As a result, decks with a lot of Evolutions will have to run some unconventional way to get around Ancient Power. Evosoda and Wally can circumvent it, or you could shut off the Ability with Wobbuffet or Hex Maniac. If you're using a deck with Evolutions at the Autumn Regional Championships, don't forget about Archeops!

Whether it was Darkrai-EX or Yveltal-EX, Darkness-type Pokémon have been a major force in the Pokémon TCG for years. Much of that power can be attributed to the Energy acceleration of Dark Patch. With this one Item card, Yveltal-EX can start dealing massive damage with its Evil Ball attack as soon as the first turn, which makes it a threat to watch out for.

One more card worth mentioning is Accelgor. After using its Deck and Cover attack to leave the opponent's Pokémon Paralyzed and Poisoned, you can move Trevenant into the Active spot to activate its Forest's Curse Ability, shutting down Item cards such as Switch that could get rid of the Special Conditions. This devastating lockdown strategy has won plenty of large tournaments, and it wouldn't be surprising to see it again in the Expanded format.

The beginning of a new Play! Pokémon season is always exciting. New strategies will develop, and new champions will be crowned. The Autumn Regional Championships are the first stop on the road to the 2016 Pokémon TCG World Championships! 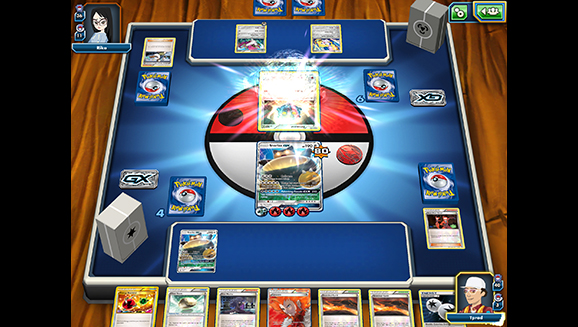