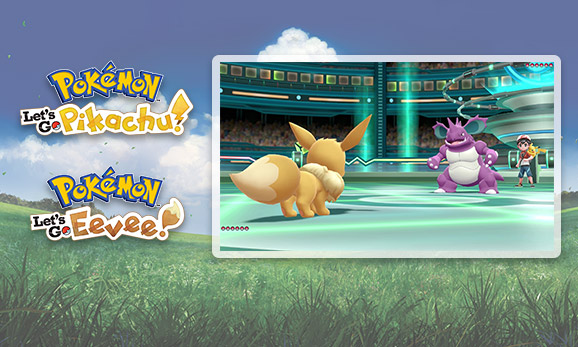 It's one thing to catch loads of Pokémon to fill up your Pokédex, but it's a whole other level of fun to put together a formidable Pokémon team to go up against Gym Leaders and other Pokémon Trainers—including your real-life friends. But before tackling these tough battles, you'll need to be able to develop new strategies and adapt to rapidly changing situations in the heat of battle. Of course, your opponent will be constantly trying to outflank you as well, so you must be ready for anything.

Thanks to their straightforward gameplay, Pokémon: Let's Go, Pikachu! and Pokémon: Let's Go, Eevee! are great for learning the ropes of Pokémon battling. With fewer Pokémon and a streamlined system that doesn't feature Abilities and held items, these games focus on basic battling skills. To get you ready for the main event, we've put together some tips that will help you gain the edge in battle. 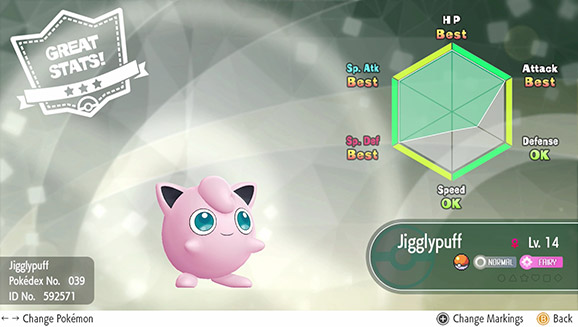 The first thing you need when putting together a solid team of Pokémon for battle is, well, a bunch of skilled Pokémon to choose from. Sure, you could assemble a team of random Pokémon that you've caught, but if you want to be the very best, you'll need to get your Pokémon in peak condition.

Building a large Catch Combo while hunting wild Pokémon is a great way to find Pokémon with high individual stats in the areas you want to focus on. Once your Catch Combo is greater than 30, each Pokémon you catch will have a max value for at least four of its stats. Our Catch Combo strategy guide has plenty of great advice on how to find your ideal Pokémon with that method.

It's in Their Nature 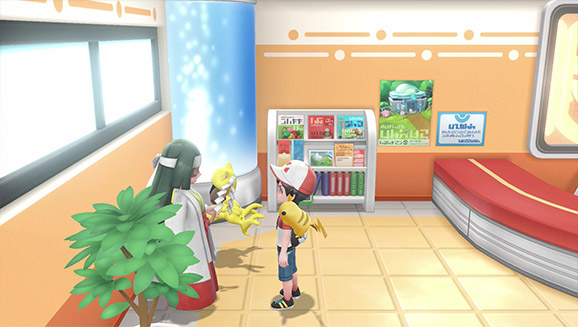 A Pokémon's Nature also affects the growth of its stats. However, there is a bit of a trade-off, since most Natures will boost one stat while hindering another. By looking at a Pokémon's summary screen, you can see which stats are being affected—those in pink are being increased, while those in blue are being decreased.

Natures can't be changed, but there is a way to manipulate which Nature the Pokémon you catch will have. Madam Celadon, a fortune teller who hangs out in Celadon City's Pokémon Center, can help you find wild Pokémon with the Nature you desire. For a fee, she will ask you a pair of questions. Your responses will determine the Nature of all wild Pokémon that you will encounter for the rest of the day. Look at the chart below to see which answers you should give to get the Nature you desire. 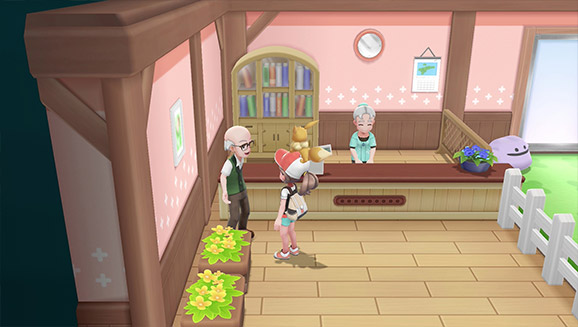 You might think that after a Pokémon reaches Lv. 100, that would be the end of its potential growth. Fortunately, that is not the case. Thanks to Hyper Training, you can give your Lv. 100 Pokémon an extra boost! Once you've become the Champion of the Pokémon League, you can chat with Mr. Hyper in the Pokémon Day Care on Route 5, just south of Cerulean City. In exchange for a Bottle Cap, Mr. Hyper will max out a single individual strength for one Pokémon—and for a Gold Bottle Cap, he'll max out all for that Pokémon! 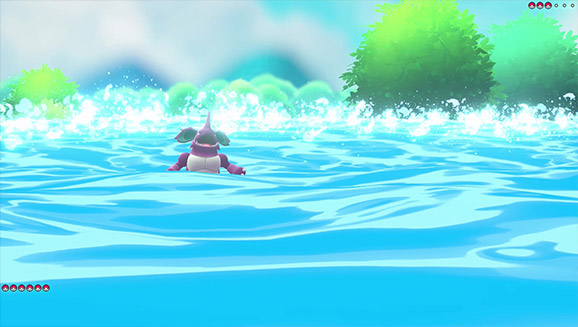 Once you've caught a selection of skilled Pokémon, it's time to assemble a balanced team. Every Pokémon move, of course, has a type, which gives advantages or disadvantages against certain types of Pokémon. Water-type moves, for example, are strong against Fire-type Pokémon, but they will have some trouble when facing Grass-type Pokémon. Consider what types of Pokémon and moves your opponent will be using, and tailor your crew to counteract what you expect to go up against.

Likewise, when teaching your Pokémon moves, it's a good idea to have them learn a variety of moves that don't all match their type. Consider the Poison- and Ground-type Pokémon Nidoking, a Pokémon that can be a considerable force in multiplayer battles. Certainly, it makes good use of the Ground-type move Earthquake and of Poison-type moves like Poison Jab, but you'll find that also teaching it the Water-type move Surf and the Ice-type move Ice Beam will give it the edge over a wider range of opponents, particularly over Pokémon that resist its other attacks, such as Aerodactyl and Dragonite.

It's also worth noting that the Rock-type move Stealth Rock can be particularly valuable, especially when battling a human opponent, who's more likely to switch out Pokémon midbattle than an NPC Trainer. Use the move early in battle—it doesn't cause any immediate damage, but it lays a trap on the battlefield, inflicting damage on any of your opponent's Pokémon that enter the match afterward. Some Pokémon will learn this move naturally through leveling up, but it can also be found in TM56, which is located on the first floor of Victory Road, near the end of your adventure. 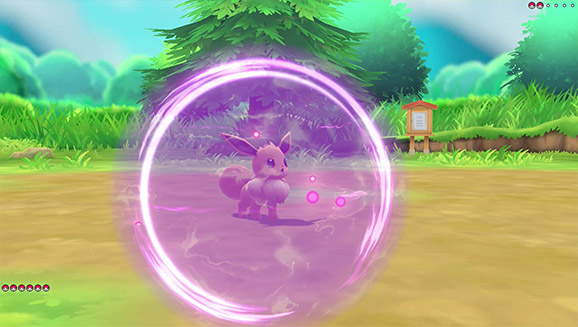 Considering your partner Pokémon can't evolve in Pokémon: Let's Go, Pikachu! or Pokémon: Let's Go, Eevee! like it usually can, you might not think that it would be particularly useful in battles. Don't underestimate either of these adorable Pokémon, though! Pikachu and Eevee are talented Pokémon that have high stats and exclusive access to some powerful moves that can tip the scales in your favor.

Pikachu's Zippy Zap move, which can first be learned by chatting with the Partner Move Tutor in Cerulean City's Pokémon Center, has increased priority and always results in a critical hit. It can be devastating when used against a Pokémon that has a weakness to Electric-type moves. Pikachu's other exclusive moves, Floaty Fall (a Flying-type move) and Splishy Splash (Water type, of course), also do considerable damage and have a solid chance of making your opponent flinch or become paralyzed, respectively.

Your partner Pokémon Eevee is even more versatile, as it can learn exclusive moves that are inspired by all its many Evolutions. Although Eevee may be only Normal type, it has access to exclusive Fire-, Water-, Grass-, Electric-, Ice-, Psychic-, Dark-, and Fairy-type moves. Each of these attacks is quite powerful, dealing damage to your opponent's Pokémon while also leaving a lasting effect on the battle, such as healing your team's status conditions, burning your opponent, or hitting your foe with an HP-draining Leech Seed. Some of these additional effects are unique, too, making your partner Eevee a huge asset in battle. 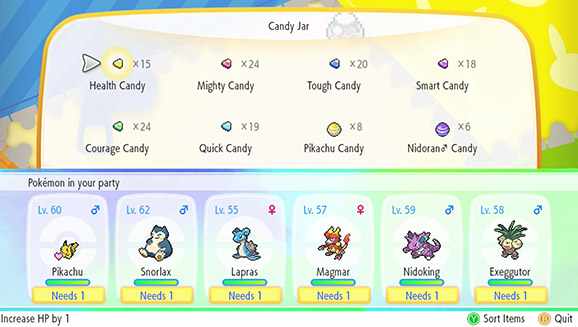 As you catch Pokémon during your adventure, you can earn Candies. Professor Oak also gives you some when you send him Pokémon. These delicious treats are perfect for giving your Pokémon a permanent boost to their stats, and you'll definitely want to indulge your Pokémon's sweet tooth before going into battle. This is especially true if you're competing against a friend who has stronger Pokémon.

In a multiplayer battle, you can adjust the battle rules to have Normal rules or No restrictions. Under Normal rules, all players' Pokémon are adjusted to Lv. 50 and any stat boosts from eating Candies will be temporarily removed for the duration of the battle. With No restrictions in place, however, your Pokémon will have all the benefits of whatever Candies you've given them. (Of course, the same goes for your opponent's Pokémon!)

There are also three different sizes of standard Candies. Any Pokémon can enjoy “regular” Candy, while only Pokémon that have reached Lv. 30 can be given Candy L. Candy XL is for Pokémon Lv. 60 or higher.

You can also occasionally find Pokémon-specific Candies, though they're not as common as standard Candies. As you might imagine, these Candies can only be given to the Pokémon they're named after (or that Pokémon's evolved forms). The benefit, though, is that they will boost all of a Pokémon's stats with just one piece! 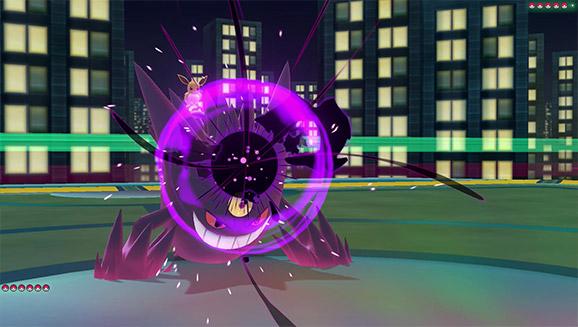 When you need an extra edge during battle, don't forget to take advantage of Mega Evolution. This temporary transformation will alter the appearance of your Pokémon and increase its stats for the duration of the battle (although its HP will remain the same). Not all Pokémon can Mega Evolve, and you can only use the technique once during battle, so plan carefully on how you want to use it.

For your Pokémon to Mega Evolve, you will need a Key Stone, which you will receive from Professor Oak and Blue toward the end of your adventure. You will also need a Mega Stone that corresponds with the Pokémon you wish to Mega Evolve. You'll be given a few when you acquire the Key Stone, and more can be purchased from a man inside the Pokémon League after you become the Pokémon League Champion. You'll also get a pair of Mega Stones for Mewtwo after defeating Green.

In addition to the stat increase, some Pokémon will undergo a change in types when they Mega Evolve. It's a good way to disrupt the battle, and it may force your opponent to rethink any strategies they formed when you first brought out your Pokémon, especially if two of your team's Pokémon have the potential to Mega Evolve. Some Pokémon even have two different forms of Mega Evolution, to mix things up even more. Not surprisingly, Mega Mewtwo X and Mega Mewtwo Y have both proven to be extremely useful in multiplayer matches, but even some Mega-Evolved Pokémon with only a single form, such as Mega Alakazam, Mega Gengar, Mega Gyarados, and Mega Aerodactyl, are capable of dishing out a lot of punishment.

Putting together an ideal Pokémon team for battles can certainly be a challenge, but experimenting with what works and what doesn't is half the fun! Once you've assembled a powerful crew, test your skills by getting together with a friend either locally or online for some intense battles! And make sure to check out other video game and Pokémon TCG tips at Pokemon.com/Strategy. 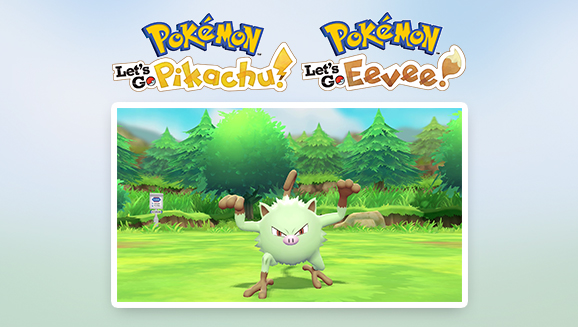 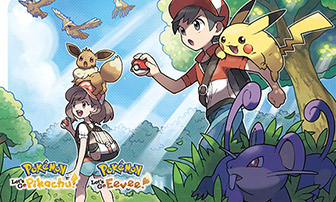