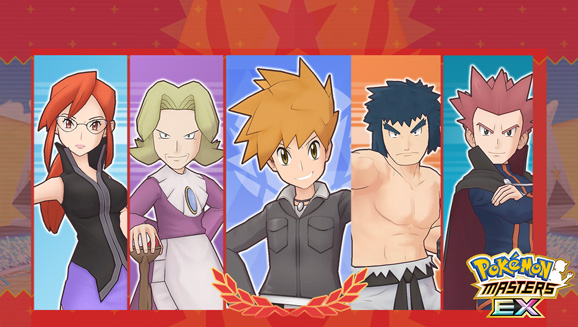 Pokémon Masters EX's one-year anniversary brought with it a lot of excitement, with one of the most exciting additions being the Champion Stadium—the key to unlocking 6★ EX. Each week, players can challenge the Elite Four and Champion to earn Champion Spirits, which can unlock 6★ EX for certain sync pairs. These battles are challenges befitting the stature of the opponents you'll face, so it's important to come prepared.

We'll go over the rewards you're playing for, summarize the battling rules specific to the Champion Stadium, and then walk you through some of our favorite tactics for taking down these powerful foes. Many of these strategies are applicable in any battle in Pokémon Masters EX, so read up if you're looking to improve!

The Champion Stadium will only have the Normal difficulty available when you first unlock it. This difficulty can be comfortably cleared for completion rewards even by lower-level sync pairs. Once you've had your first taste of the action, you'll unlock Hard difficulty. Lv. 125 sync pairs are recommended for this difficulty. You can face challenging battles here once per week for great rewards, so read on for tips about taking on the toughest battles the Champion Stadium has to offer. 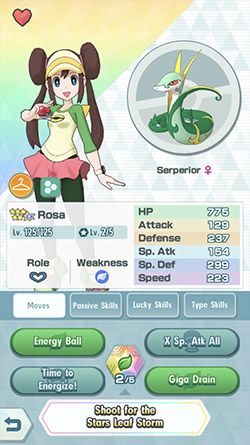 A unique reward in the Champion Stadium is the Champion Spirit item, which is necessary for a 5★ sync pair on which you used 20/20 Power-Up items to reach 6★ EX. You'll earn some Champion Spirits with each battle you win, so it's important to clear each battle to earn all the available rewards. You can also earn 5★ Power-Up Tickets from each battle. You can exchange these tickets for Custom ★ Power-Ups, which are sync pair–exclusive versions of the 5★ Power-Up items needed to increase the potential of a 5★ sync pair.

Sync pairs that unlock 6★ EX get a cool new outfit and an incredible boost to the power of their sync moves, so it's definitely worth taking on the Champion Stadium each week to stock up on these valuable items! 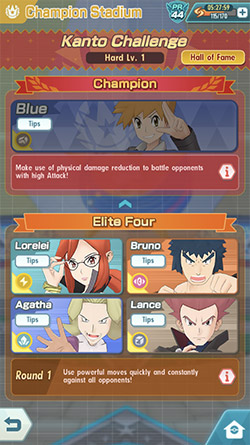 The Champion Stadium pits you against a region's Elite Four and Champion in a series of five exciting battles. Normal difficulty is unlikely to present much resistance if you've been playing for a while, but Hard difficulty is more imposing. While you won't need all of the sync pairs you'll use to be at max level to succeed at Hard difficulty, having Lv. 125 sync pairs will greatly increase your margin for error, and most sync pairs will struggle to contribute if they're any lower than Lv. 110 or so. It'll definitely make a difference to teach your powerful sync pairs lucky skills and develop their sync grids as well, but it isn't necessary to win.

Once you've defeated the Elite Four, you'll then be able to battle the Champion. The 12 sync pairs you battled with to reach that point will still be unavailable, so make sure you set aside some powerful sync pairs to defeat the final opponent! In addition to a fifth special parameter that'll be in effect during the battle against the Champion, you'll also have to choose one of the four special parameters from the previous Elite Four battles to be in effect as well. Try to pick a parameter that will give you an advantage or at least won't give you a disadvantage.

In all, you'll need five unique teams of three sync pairs—15 sync pairs in total—to be victorious each week. The unique quirks of these battles lead to several different approaches you can use to complete them. We'll go over three different strategies you can apply to any of the battles in the Champion Stadium to help you plan your attack. 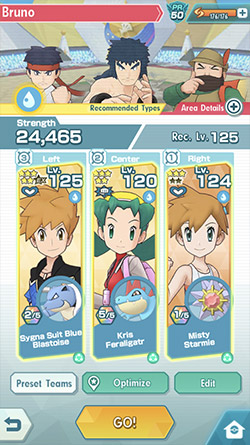 Since each battle consists of three opponents that have the same weakness, the simplest way to approach the Champion Stadium is to take advantage of that weakness. If you use three sync pairs that match the opponents' type weakness, not only will they all be able to deal supereffective damage, they'll also be able to increase each other's stats with type skills and gain the maximum benefit from gear of the same type. You'll notice this is often the approach suggested when you check out the in-game hints.

A great example of this approach would be a team consisting of Misty & Starmie, Sygna Suit Blue & Blastoise, and Kris & Feraligatr against an Elite Four member weak against Water. To take advantage of Sygna Suit Blue & Blastoise's passive skills and high defensive stats, you'd probably want to set your team's tactics so the opponents target Sygna Suit Blue & Blastoise first. Then, set your tactics so Kris & Feraligatr are targeted last so that they can launch attacks for as long as possible. Misty & Starmie can help out by using their moves to reduce the damage the team takes. All three sync pairs can also contribute to offense by dealing supereffective damage, and they can all have higher-than-normal stats thanks to type skills and gear.

This approach requires lots of high-level sync pairs to work every week, but it's probably the safest way to win. It's also a great chance to use some sync pairs that you might not use every day. When using this approach, it's particularly important to max out your gear and type skills in order to take advantage of your sync pairs being the same type. You can earn skill spheres to power up your sync pairs' type skills in the Training Area, and you can earn 2★ gear in EX Plaza battles, which are located in the Co-op section of the in-game Explore menu.

Keep in mind that there are no rules requiring you to use sync pairs that share the same type. While not doing so may not provide you with the full benefits of gear and certain type skills, a team consisting of a strong strike sync pair that can target the opponents' weakness, a support sync pair, and a sync pair that can absorb a lot of damage is still a good answer to most battles. Be sure to use the tactics feature so that your sturdiest sync pair is targeted first and your strike sync pair is targeted last. 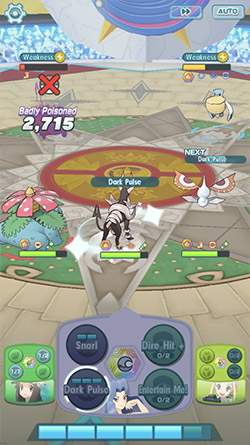 If your roster of sync pairs is looking a little light on sync pairs that can take advantage of your opponents' weakness, consider a strategy that plays more into the battle's special parameter. While it's still a huge advantage to have a strike sync pair that can exploit the opponents' weakness, some of the special parameters change the battle so much that you can build your strategy around them.

The special parameter that increases the effects of status conditions and other conditions is the perfect time to shift gears from a more type-centric approach. Inflicting the badly poisoned condition will quickly lead to an outrageous amount of damage, and you can add even more with a trapping effect, like Viola & Masquerain's Infestation or Blaine & Rapidash's Fire Spin. You can design whole strategies out of this approach—try pairing a sync pair that poisons foes with Janine & Ariados or the player character & Nidoqueen so you can reduce the stats of every opponent with Venom Drench and leave them helpless! For a more offensive approach, you could teach Karen & Houndoom Dirty Fighting 5 and Foul Fighting 5 through their sync grid to increase their damage against targets affected by the conditions that this special parameter enhances.

You can also change your team composition in subtler ways to adapt to certain special parameters. If you'd like all of your team's sync pairs to be on the offensive—perhaps because you happen to have lots of sync pairs that can exploit a type weakness—the special parameter that increases the rate at which the move gauge fills is a great fit since you'll have enough move gauge to use between all three of your sync pairs. But if you have the special parameter that reduces the sync move countdown, you might be better off with a team of two support sync pairs and a single strike sync pair. The support sync pairs can focus on using their Trainer moves to quickly reduce the sync move countdown, freeing up the move gauge for your strike sync pair's attacks until they can unleash their sync move. 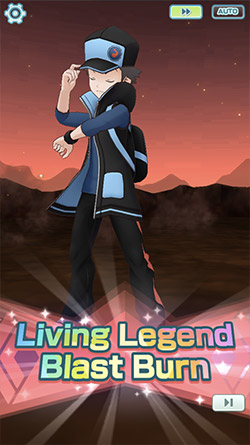 The key to simply overpowering a battle or two each week is to use a team with great synergy in a similar vein to what we suggested in our Pokémon Masters EX Battle Villa Tips guide. In the Battle Villa, a key consideration is endurance over many battles, but in the Champion Stadium, you'll want to focus more on quick bursts of damage or healing—it's often game over if the opponent makes it to a second sync move or your main attacker goes down.

The best sync pairs for the Champion Stadium combine a couple of these attributes. For example, Sabrina & Alakazam are a great support sync pair that can get you out of tough spots—they can use Sixth Sense! to heal a teammate and boost the teammate's Sp. Atk, boost allies' critical-hit rate with Dire Hit All, and also reduce incoming physical damage with Reflect. Sync pairs that can boost their own offensive stats, like Giovanni & Mewtwo and Brendan & Sceptile, are similarly much easier to build solid teams around, since you won't want to give up much in your team composition if you're already not hitting super effectively.

You'll have a much easier time pulling this off if your sync pairs have developed sync grids, especially your strike sync pairs. Some particularly strong sync pairs can make do without, but investing some sync orbs into Iris & Haxorus, Wally & Gallade, Guzma & Golisopod, and other strike sync pairs with expanded sync grids will be well worth the investment. 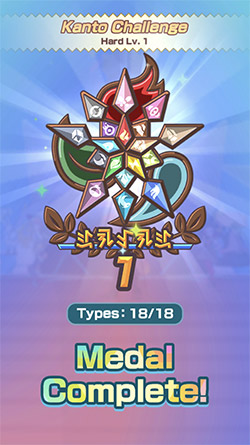 The Champion Stadium is tricky even if you have strong sync pairs, so don't get discouraged if you have to work at it a little. If you keep leveling up your sync pairs, collecting sync orbs, and expanding your roster, the battles will get easier.

Plan ahead as much as you can. Don't use all of your strongest sync pairs in the first couple of battles unless you're confident you have a plan to sneak by the last opponents. The Champion is typically a little tougher than the Elite Four, so you don't want to run out of gas before you get to the end.

One final tip—if you're scrambling to find suitable sync pairs, don't forget that some sync pairs know attack moves with types other than their own. For example, even if they don't receive the full benefits of gear and type skills, Cyrus & Palkia are plenty capable as a substitute for a Water-type sync pair, Professor Oak & Mew can use attack moves of several different types after using their sync move, and Gladion & Silvally can fill in as any type after using My Mind's Made Up!

Get back to battling and earn Champion Spirits to unlock 6★ EX! 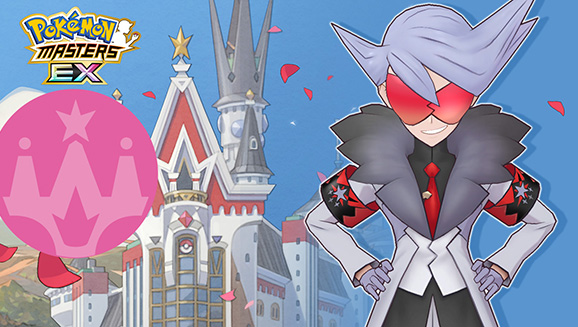