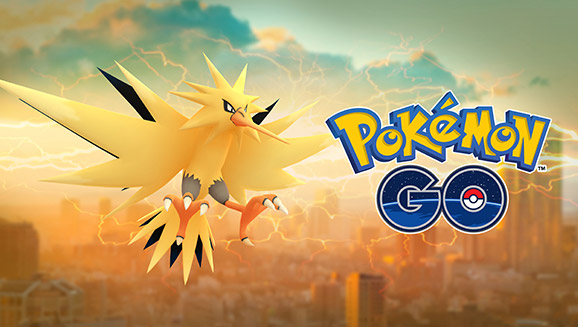 The newest Raid Boss appearing in Gyms around the world is the Legendary Pokémon, Zapdos. Just like Articuno and Moltres before it, Zapdos will be available for a limited time. Make sure to challenge this boss before August 14 to add its powerful Electric-type attacks to your team.

Zapdos is a tough Pokémon to catch—but we're here to help. You'll be able to capture it only using the Premier Balls earned from defeating it, and the more damage you do, the more Premier Balls you'll get, so you'll need your Pokémon to perform well in battle to maximize your chances. Check out our guide to training Pokémon in Pokémon GO to get your team up to speed, then read on for some tips to ground out the Electric-type Pokémon.

No one type resists Zapdos's attacks while dealing supereffective damage in return. That leaves Golem's two types overwhelmingly the best choice—its Rock-type attacks will be super effective, and as a Ground-type Pokémon, it'll take reduced damage from Zapdos's attacks. Rhydon shares this optimal combination, but it'll deal much less damage because it can't learn a Rock-type Fast Attack to go along with the Charged Attack Stone Edge. Fellow Rock-type Tyranitar's Fast Attacks won't be super effective either, plus it lacks Rhydon's resistance to Electric-type attacks. Tyranitar's astronomical stats still make it a good choice if it knows the supereffective Stone Edge, though.

Other Pokémon able to deal significant damage to Zapdos will also receive significant damage in return, but it's a sacrifice you'll probably need to make to win before Battle Raid time expires. Ice-type attacks from Jynx and Articuno, or Rock-type Attacks from Aerodactyl, are sure to deal devastating damage, just be ready for Zapdos to knock them out of battle with shocking efficiency. Setting aside fellow Legendary Pokémon Moltres, the Pokémon that deal the greatest damage to Zapdos without a type advantage are Gengar, Alakazam, Dragonite, and Flareon (in that order). None of them resist Zapdos's Electric-type attacks, however. Remember that you can dodge attacks by quickly swiping left or right—these Pokémon will need to frequently dodge to stay in the Battle Raid for long.

Depending on the damage you did, you may not get many Premier Balls to capture Zapdos once you've defeated it, so you'll want to make each one count. Use a Golden Razz Berry before each throw. Stock up on them beforehand by defeating other Raid Bosses!

The odds of capturing Zapdos are greatest while the target ring is at its smallest diameter. Scoring Great or Excellent Throws will increase your odds, and throwing Curveballs will improve them further. But work within your abilities—if you don't think you can hit Excellent Curveballs reliably, go for easier throws instead of missing the target ring completely.

You may waste your Premier Balls if your target is moving around when you throw. Wait for Zapdos to start acting up and for the target ring to disappear while it's a size you're comfortable throwing into, then time your throw so that the Premier Ball lands as the target ring reappears.

Legendary Pokémon are tough to capture, so don't be discouraged if Zapdos gets away the first time you defeat it. Stock up on useful items like Max Potions, Max Revives, and Golden Razz Berries so you're prepared to try again later. But don't wait too long—Zapdos is available for only a limited time. Good luck with your Legendary Pokémon adventures, and remember to check back to Pokemon.com/Strategy for more Pokémon GO, video game, and Pokémon TCG tips.