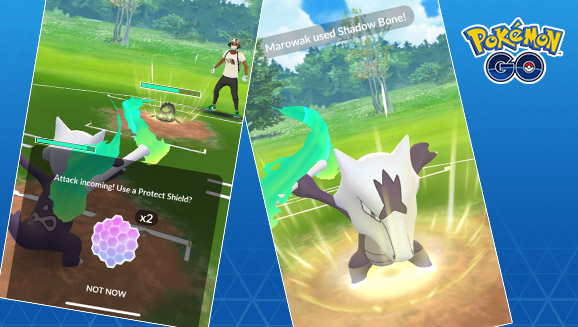 Pokémon battles require skill, knowledge, and experience to master. Pokémon GO gives Trainers of all levels the opportunity to master Pokémon battling through the GO Battle League, and there’s plenty of incentive to climb the ranks—including earning rewards such as Rare Candies and Stardust along the way. If you’re just getting started with Trainer Battles in Pokémon GO, there’s a lot to learn—and even more advanced Trainers can benefit from tips, advice, and strategies, too.

Here, we’ll take a deep look at one of the most important components of a successful Pokémon GO Trainer Battle strategy: attacks.

The Anatomy of an Attack

Each Pokémon in Pokémon GO has two attacks: one Fast Attack and one Charged Attack. The Fast Attack is the one you’re going to use the most—it’s the attack you perform simply by tapping your screen. Each time you use your Fast Attack, it generates energy that can be used for Charged Attacks. You can see this energy generation during battle; a small circle with the name of your Pokémon’s Charged Attack near the bottom of your screen will fill slightly with each use of your Pokémon’s Fast Attack. This circle will have a color and symbol associated with the attack’s type—for example, a Water-type attack will have a blue circle that contains a raindrop. Once the circle is completely full, you can tap it to use that Charged Attack.

A Pokémon’s attack types can be just as important as that Pokémon’s type. Many Pokémon will know Fast and Charged Attacks that match its type. For example, Skarmory is a Steel- and Flying-type Pokémon can currently learn only Steel- and Flying-type attacks in Pokémon GO, and it’s a popular choice in the GO Battle League’s Great League. While a Pokémon using only attacks of its type might make it more predictable, there is an advantage to doing so: when a Pokémon uses an attack of its same type, it deals more damage than normal.

Countless Trainer Battles are decided based on how the Trainers use their Protect Shields. Getting your opponent to use their two Protect Shields as quickly as possible—leaving the rest of their lineup vulnerable to your Pokémon’s Charged Attacks—is a solid strategy. One way of doing this is to use a Pokémon that knows a Charged Attack that requires little energy to use.

On a Pokémon’s summary screen, each attack has a number next to it that indicates its damage. Fast Attacks typically deal between 0 to 16 damage, while Charged Attacks have a massive range—for example, Acid Spray deals 20 damage and Aeroblast deals 170.

In many cases, attacks that deal lower damage have other benefits. A Charged Attack that deals less damage might require less energy, raise your Pokémon’s stats, or lower the opposing Pokémon’s stats.

Shadow Pokémon—Pokémon that have been rescued from Team GO Rocket but haven’t been purified—deal additional damage with both their Fast and Charged Attacks. You can see how much extra damage Shadow Pokémon deal by looking at the number following the plus sign in their attack’s damage listing. For example, Mewtwo’s Fast Attack Confusion deals 16 damage, and its Charged Attack Psystrike deals 90 damage. But a Shadow Mewtwo’s Confusion deals 19 damage, and its Psystrike deals 108 damage. The tradeoff for this damage increase is that Shadow Pokémon also take more damage from your opponents’ attacks.


The Advantages of a Second Charged Attack

When choosing your team’s attacks, you’ll want to think about which attacks will help shore up your team’s weaknesses. Swampert, for example, is a popular Pokémon in Trainer Battles, particularly in the Ultra League and Ultra League Premier Cup. This Water- and Ground-type Pokémon takes significant damage from Grass-type attacks, so Trainers in the GO Battle League sometimes carry Grass-type Pokémon on their teams specifically to counteract it. While Swampert in the GO Battle League typically know Hydro Cannon and Earthquake, an alternative Charged Attack that Swampert could use is the Poison-type attack Sludge Wave. This attack can hit Grass-type Pokémon for supereffective damage, which can help Swampert out in a seemingly unfortunate matchup.

Another popular GO Battle League Pokémon that takes great advantage of a second Charged Attack is Melmetal. This powerful Steel-type Pokémon has access to a surprisingly diverse range of attacks, including the Normal-type Hyper Beam, the Fighting-type Superpower, the Electric-type Thunderbolt, the Rock-type Rock Slide, and the Steel-type Flash Cannon. As a Steel-type Pokémon, Melmetal is weak to Fire-, Ground-, and Fighting-type attacks. Melmetal can improve its matchup against Fire-type Pokémon with Rock Slide, which can deal supereffective damage against them.

Ready to start battling? Remember to have fun and learn from every battle! You can look forward to more GO Battle League coverage on Pokemon.com.