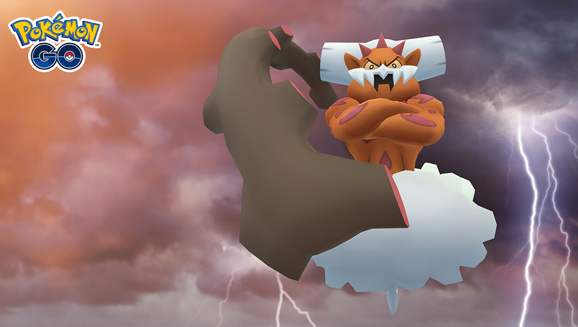 If you've been keeping up with collecting Legendary Pokémon as they've appeared in Pokémon GO, you might already have Tornadus and Thundurus in your collection. You'll have the opportunity to reunite the trio by defeating and catching Landorus in Raid Battles—but only for a limited time. Landorus in Incarnate Forme will appear in Raid Battles from March 31, 2020, at 1:00 p.m. PDT until April 21, 2020, at 1:00 p.m. PDT, so make sure to catch one before it's too late.

If you aren't sure how best to lasso Landorus, we have some earth-shattering tips to make sure you aren't left behind. (OK, they're maybe more just ordinary tips.)

The Premier Balls you earn by defeating Landorus are the only Poké Balls you can use to catch it, so it's crucial to be prepared. Maximize your chances by helping your team take over the Gym before the raid starts, battling alongside your friends, and picking Pokémon for your party that'll perform well in battle. Be sure to learn how to train Pokémon in Pokémon GO to get your team up to speed, and then read on for more about Landorus.

Take advantage of Landorus's weaknesses. Landorus is famous for being one of the more impressive battling Pokémon in the Pokémon RPGs, but that doesn't mean it's without type weaknesses to exploit. As a Ground- and Flying-type Pokémon, Landorus is especially weak to Ice-type attacks, so if you have a powerful Weavile, Mamoswine, Articuno, Glaceon, Jynx, or even a Mewtwo that knows Ice Beam, you'll be off to a great start (and remember that the Shadow versions of Weavile and Articuno will now deal even more damage than their counterparts!). If you run out of Ice types, Landorus's other weakness is to Water-type attacks, but Water-type attacks will typically do far less damage than Ice-type attacks in this encounter.

Consider the weather. While the weather shouldn't impact your choices as much against Landorus as it might against some other Raid Bosses, you may want to change your strategy a little if it's raining. The best Water-type Pokémon will still deal less damage in the rain than Ice-type Pokémon of equivalent power, but since several of Landorus's attacks—Focus Blast, Rock Slide, and Rock Throw—are super effective against Ice types, you may find yourself better off using Water-type Pokémon with Water-type attacks against many of Landorus's possible attack combinations because the Water types will be so much easier to keep on the field. We have to give a special shout-out to Swampert—not only will it do impressive damage if it knows Hydro Cannon, but it also resists Landorus's Rock-type attacks.


Throw Your Premier Balls Carefully When Aiming for Legendary Pokémon

You'll earn a limited number of Premier Balls by defeating Landorus, and you can use only those Premier Balls to catch it, so take careful aim to make each one count. If you battle alongside your friends, you can earn extra Premier Balls, so be sure to bring friends with you. Using a Golden Razz Berry before each throw will vastly increase your chances of success. You can stock up on some beforehand by defeating other Raid Bosses.

Your chance of catching a Pokémon is greatest when the target ring is small enough for you to land Excellent Throws, and throwing Curveballs can improve your chances even more. But work within your abilities—if you don't think you can reliably make Excellent Curveball Throws, aim for Nice Throws or Great Throws rather than risk missing the target ring completely.

Like all Legendary Pokémon, Landorus is tricky to catch, so don't be discouraged if it escapes your first encounter. Stock up on useful items, like Max Potions, Max Revives, and Golden Razz Berries, and try again later with some friends. Good luck with your next Raid Battle, and remember to check Pokemon.com/Strategy for more Pokémon GO, video game, and Pokémon TCG tips.