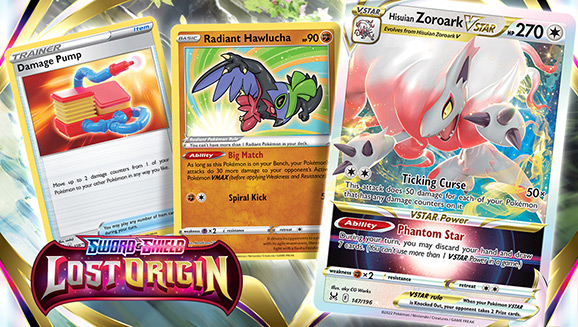 The Baneful Fox Pokémon lives up to its name with its powerful Ticking Curse attack.

Few non-Legendary Pokémon have consistently dominated the competitive scene with almost every card that features them—Zoroark is one such Pokémon! Both Zoroark from Black & White and XY—BREAKthrough were key players in meta-defining decks during their heydays; also, Zoroark-GX from Shining Legends was commonly considered the best card for the entirety of the 2017–2018 and 2018–2019 seasons. 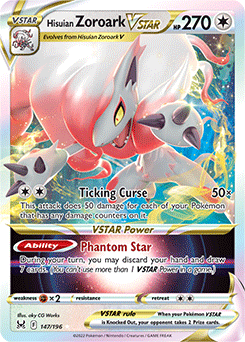 Let’s fast-forward to today and the recently released Sword & Shield—Lost Origin expansion. Among the many new and exciting cards is Hisuian Zoroark VSTAR, which has already seen tournament success at the Peoria Regional Championships. It’s reminiscent of Zoroark-GX in that it can attack for two Colorless Energy with damage based on the number of Pokémon on your side of the field. It also has a powerful Ability—this time a VSTAR Power—that draws additional cards.

It may seem difficult at first to spread damage counters on your side of the field, but doing so is necessary if you want to boost the damage of Hisuian Zoroark VSTAR’s Ticking Curse attack. However, look no further than these supplementary cards for help: Gengar and Damage Pump from Sword & Shield—Lost Origin, and Gapejaw Bog from Sword & Shield—Astral Radiance. All three provide effective ways of slightly damaging your Pokémon, although realistically you’ll need six damaged Pokémon in play to pick up Knock Outs against Pokémon VSTAR and VMAX. This means you’ll need to carefully plan out when you put Pokémon onto your Bench.

Professor’s Research and Marnie make up this deck’s Supporter engine. Without the space for fancy cards like Inteleon from Sword & Shield or Bibarel from Sword & Shield—Brilliant Stars, you must once again return to the strongest Supporter cards in terms of pure draw power. Crobat V, Lumineon V, and Oranguru provide the extra oomph required to pick up a big Knock Out on an important turn. These Pokémon contribute damage to Ticking Curse as well, so the Bench space they occupy isn’t wholly wasted. 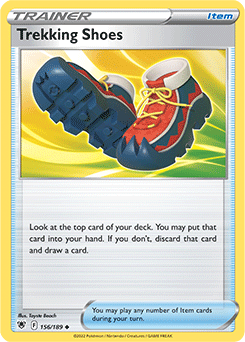 It might seem odd that the only Energy cards in this list are the four Double Turbo Energy. The reason for this inclusion is that other Energy types aren’t very efficient in supplying Ticking Curse’s attack cost. Realistically, the only situation in which you could attach two Basic Energy is when you go first and are also fortunate enough to draw Basic Energy. I’d rather dedicate the deck space towards other cards, namely Trekking Shoes. With the full four copies of Gapejaw Bog and Damage Pump, as well as two copies of Gengar, the only way to improve the odds of attacking with a fully souped-up Ticking Curse is by increasing how quickly you can burn through the deck.

Continuing with the idea that consistency is key, the list is outfitted with a full count of Quick Ball and Ultra Ball, plus an ample number of Evolution Incense to boot. There’s a heightened importance on finding Pokémon, especially when searching for the turn two attack. These Poké Ball cards are great at finding Crobat V and simultaneously decreasing the hand size for Dark Asset. The single copy of Hisuian Heavy Ball acts as an additional search card; it is likely that one Pokémon will start in the Prize cards. It is also especially important to find Radiant Hawlucha when up against Mew VMAX and Kyurem VMAX to reach a one-hit Knock Out.

Due to the turn-and-burn nature of this deck, it’s helpful to include a single Ordinary Rod to recover Pokémon. If you need to discard a Hisuian Zoroark VSTAR on the first turn of the game with Professor’s Research, it’s important to be able to reshuffle at least one so you have three Pokémon to attack with. Ordinary Rod is also useful for reshuffling Lumineon V or Crobat V. Finally, Pokémon VMAX decks may target Radiant Hawlucha, stifling your damage. Ordinary Rod allows you to always attack with Radiant Hawlucha in play at least twice, which gives you your six Prize cards.

There are two cards that can help you switch out when needed—Escape Rope and Air Balloon. Escape Rope can be pivotal in Knocking Out a Pokémon V, but it is mostly used for the self-switch. Air Balloon has a more permanent switching effect and can be placed prematurely. The main card that could throw a wrench into the works is Tool Jammer, but most lists aren’t including it right now. If this changes, you may want to swap an Air Balloon for a copy of Switch.

The final tool in the list is Choice Belt. Its presence is self-explanatory—the plus-30 damage is needed to reach Knock Outs on Pokémon VMAX. Though the card isn’t useful in most of your matchups, three copies are slotted because missing a Knock Out component is usually a one-way ticket to a loss. 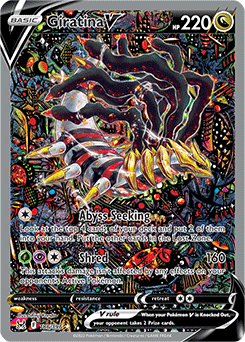 You’ll want to remember a few important numbers when playing this deck. The first is five. If you have fewer damaged Pokémon in play, you’ll come up short against the 220-HP Pokémon V in the format, such as Arceus V, Origin Forme Palkia V, and Giratina V. Despite Choice Belt’s best efforts, you’ll only reach 210 damage after subtracting 20 from Double Turbo Energy. Make sure you can always reach five or more damaged Pokémon.

Next up is six, the number of damaged Pokémon needed to Knock Out a 280-HP Pokémon VSTAR. Even with five Pokémon and a Choice Belt attached, you cap out at 260 damage because Radiant Hawlucha only increases damage against Pokémon VMAX. Because you don’t have any comeback tricks like Roxanne or Cheren’s Care, you must pick up a Knock Out on every turn of attacking. Otherwise, you’ll lose the Prize trade over the course of the game, assuming the opponent can Knock Out your Hisuian Zoroark VSTAR with a single attack.

Finally, you should remember 340. In most cases against Pokémon VMAX, you’ll need all six damaged Pokémon, Radiant Hawlucha, and Choice Belt. This totals to 340 damage after subtracting the 20 from Double Turbo Energy. Kyurem VMAX has 330 HP, so you just barely get there. Mew VMAX only has 310 HP, but if the opponent has Oricorio in play, you’ll hit for 320 damage with all modifiers present.


How to Achieve the Numbers

Because there’s such a reliance on ensuring many damaged Pokémon are in play, make sure to avoid putting Pokémon into play prematurely. You’ll come up short if you do. For example, if you put three Pokémon onto your Bench without Gapejaw Bog in play, you only have two Bench spots remaining to contribute damage without the opponent’s help. To reach six total damage counters, you’d need to activate both Gengar and use Damage Pump on each one. This is much easier said than done once you consider that you can’t use Crobat V to draw additional cards—your Bench spots must be dedicated to Gengar. 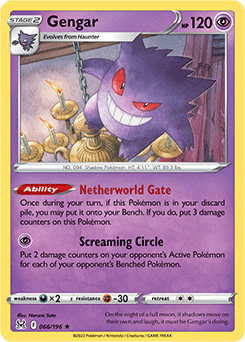 Even if you only need five damaged Pokémon (to Knock Out a Pokémon V, for instance), you’d need two Damage Pump to pull damage counters from a newly Benched Basic Pokémon and a Gengar. You also set yourself up for a long-term dependency on Damage Pump on the following turns if your opponent takes a Knock Out on one of your damaged Pokémon.

A good rule of thumb is to never put more than two Pokémon on your Bench without damage from Gapejaw Bog. This way, you only need one Damage Pump on the following turn to reach five damaged Pokémon in play. Even if your opponent Knocks Out one of your damaged Pokémon, you can use your second copy of Damage Pump to jump from four to six damaged Pokémon (provided you have Gapejaw Bog).

You should always damage your Pokémon with Gapejaw Bog when possible. If you have it in the opening hand, put it in play to get the damage counters rolling. There’s really no reason not to damage a Pokémon immediately. If the additional HP helps Hisuian Zoroark VSTAR withstand an attack, you could always remove one of the two damage counters with Damage Pump while remaining damaged.

Depending on the meta you’re expecting, you can shake up the list by cutting some of the consistency cards: Trekking Shoes, Evolution Incense, Hisuian Heavy Ball, Choice Belt, and Lumineon V are all cuttable. In their place, you might consider adding some tech Pokémon. Dunsparce from Sword & Shield—Fusion Strike can improve your matchup against Fighting-type decks, which naturally hit Hisuian Zoroark VSTAR for Weakness. Another option is Manaphy from Sword & Shield—Brilliant Stars, who can protect your Benched Pokémon from Radiant Greninja.

The popular Lost Zone mechanics make use of chip attacks and spread damage with Sableye. To combat these tricks, you can add Cheren’s Care, which should allow you to effectively heal a Hisuian Zoroark VSTAR after a small attack. Big Parasol is also useful. When attached to your Active Pokémon, it protects all your Pokémon from the effects of attacks, including those from Giratina VSTAR’s Star Requiem VSTAR Power and Sableye’s Lost Mine.

I’m a big fan of Hisuian Zoroark VSTAR and expect it to succeed as the format evolves. Fast, consistent, hard-hitting decks have always been strong, and this one is no exception. This deck isn’t too difficult to pick up either, so I’d recommend it to newer players as well! The path to maximum damage output for Ticking Curse is truly an enjoyable puzzle to solve. 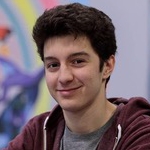 Xander Pero
Xander Pero is a contributing writer for Pokemon.com. He was an avid fan until discovering sanctioned tournaments in 2009. He formerly traveled often for the Top 16 circuit, but now spends his time focusing on university, where he studies industrial engineering. You can find him at various tournaments, as well as on Twitter at @xanderpero.