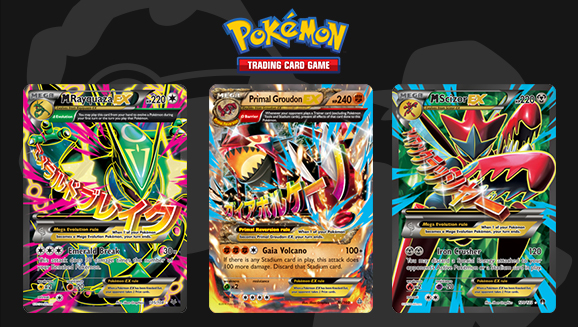 Get Started in the Standard Format

Each year, the Standard format rotation brings change and new life to the Pokémon Trading Card Game. Old strategies fall by the wayside as new ones emerge, and some strategies gain new relevance as their toughest adversaries leave the format. We've already discussed a Volcanion deck and a Yanmega BREAK deck that have the potential to be great, but let's take a look at some other decks that look to be promising for this new season of the Pokémon TCG.

With the notable exception of Shintaro Ito's victory with Mega Audino-EX at the 2016 Pokémon TCG World Championships, Mega Evolution Pokémon didn't have a ton of success in the previous season. Most of them were just too slow to keep up with Night March decks or had a Weakness to those pesky Joltik or Pumpkaboo. But with those out of the way, it could be time for some of these massive Pokémon-EX to rise again. 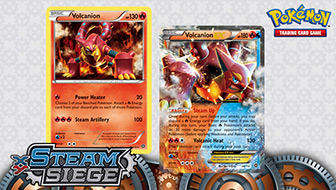 Bring the Heat with Volcanion-EX! 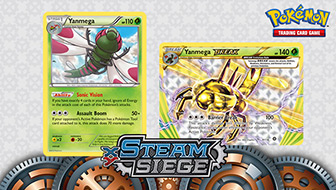 Break Down Barriers with Yanmega BREAK! 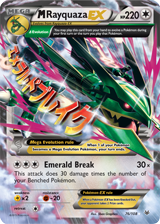 Mega Rayquaza-EX has been an incredible force since its debut, but there always seemed to be something holding it back from becoming the top deck. First it was the annoying combination of Crushing Hammer and Seismitoad-EX's Quaking Punch, and then it was the Night March deck with its Lightning-type Joltik to hit Mega Rayquaza-EX's Weakness. With those hurdles out of the way, is it finally Mega Rayquaza-EX's time to shine? The combination of Rayquaza Spirit Link, Mega Turbo, and Double Colorless Energy, in conjunction with the Δ Evolution Ancient Trait, make it possible to get Mega Rayquaza-EX into play with a charged-up Emerald Break attack in a single turn. Throw in the Sky Field Stadium card to increase the size of your Bench to eight Pokémon, and Emerald Break can do 240 damage! With that kind of speed and force, it's no surprise that many players believe that Mega Rayquaza-EX is the deck to beat as we enter the new Standard format.

What to watch for: Mega Rayquaza-EX will be in the crosshairs of a lot of Trainers. Expect plenty of people to try to counter it by using Lightning-type Pokémon such as Raichu. Altaria's Clear Humming Ability is a great way to respond to Raichu, since it removes the Weakness of all of your Colorless-type Pokémon. 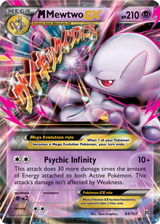 Mega Mewtwo-EX is another Mega Evolution Pokémon screaming with potential, but because of its Weakness, it was held back by Trevenant and the Pumpkaboo in Night March decks. The Psychic Infinity attack can reach absurd amounts of damage very quickly with the help of Mega Turbo and Double Colorless Energy. And if your opponent can't Knock Out this massive 210-HP Pokémon in one attack, they're in for a headache. Another way Mega Mewtwo-EX can do major damage is with the Shrine of Memories Stadium card, which allows it to use Mewtwo-EX's Damage Change attack. Against a Pokémon that has no damage, Mega Mewtwo-EX essentially heals itself by moving all of its damage onto the opponent's Active Pokémon. Garbodor further adds to the disruption, shutting down all Abilities with Garbotoxin. Against a Mega Rayquaza-EX deck, playing a Parallel City to reduce your opponent's Bench to three Pokémon combined with Garbotoxin shutting down Hoopa-EX's Scoundrel Ring Ability can cripple their strategy.

What to watch for: Mega Mewtwo-EX has a hefty 210 HP, but it's still vulnerable in some specific situations. Attaching an Assault Vest Tool card to Mega Mewtwo-EX can reduce the damage it takes from Mega Rayquaza-EX's Emerald Break attack to a maximum of 200, just short of a Knock Out. 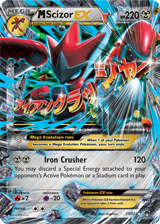 Mega Scizor-EX didn't see much action last season, but the rotation has breathed new life into it, too. The Iron Crusher attack doesn't hit for as much damage as the attacks of the other Mega Evolution Pokémon we've looked at, but it's certainly disruptive. Nearly every deck uses Stadium cards and Special Energy, so this attack will discard your opponent's cards pretty frequently. Combine this with Crushing Hammer to discard your opponent's basic Energy and Garbodor to shut down Abilities, and you have quite a powerful deck that really limits your opponent's options.

What to watch for: Fire-type Pokémon will make short work of pretty much any Pokémon in this deck, but Weakness Policy can give you a fighting chance against them. Without it, your poor Mega Scizor-EX will be melting quickly if you happen to come across any Volcanion decks. 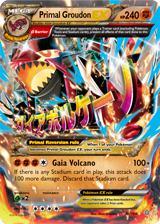 If there's one Pokémon that embodies the pure power of Mega Evolution Pokémon, it's the monstrous Primal Groudon-EX. This 240-HP behemoth has the Ω Barrier Ancient Trait to protect itself against most of the opponent's Trainer cards, and its Gaia Volcano attack can deal colossal amounts of damage with the help of Strong Energy. Without Battle Compressor in the Standard format, the popular Vespiquen might not see as much play, opening the door for the return of Primal Groudon-EX (which is weak to Grass types). In an environment full of Mega Evolution Pokémon, one that can withstand an attack while being able to one-hit KO the other Pokémon could be powerful.

What to watch for: Giratina-EX's Renegade Pulse Ability can be a pain for Primal Groudon-EX, and it gets even worse when the Chaos Wheel attack prevents you from playing a Stadium card to boost Gaia Volcano's damage. If you're worried about Giratina-EX, try to slow it down by adding cards such as Team Flare Grunt or Jirachi to discard its Double Dragon Energy. 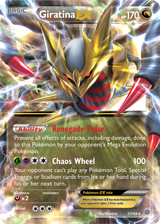 Don't Forget about the Rest

Mega Evolution decks are sure to be strong, but they aren't the only game in town. Plenty of other strategies are expected to make waves in the Standard format. Let's look at a few of them.

With all this talk about Mega Evolution Pokémon, why not use a card that can stop them in their tracks? Giratina-EX is just that card: its Renegade Pulse Ability protects it from the attacks of Mega Evolution Pokémon. Its Chaos Wheel attack can disrupt all sorts of strategies, particularly ones that rely heavily on Special Energy cards. We saw this Pokémon used in a variety of strategies last season, and there's no reason to believe that success won't continue this season. Its partner for this deck is Darkrai-EX with its impressive Dark Pulse attack. Use Max Elixir to get as many Darkness Energy into play as possible, and then hit for big damage. Double Dragon Energy attached to a Giratina-EX counts as two Darkness Energy, so these Pokémon pair together rather well.

What to watch for: Some Abilities, such as Volcanion-EX's Steam Up, can pose quite a problem for this deck. Adding a couple of Garbodor for its Garbotoxin Ability can give you the edge you need in certain matchups. Just be careful not to activate it against Mega Evolution Pokémon, or you'll shut off your own Renegade Pulse. 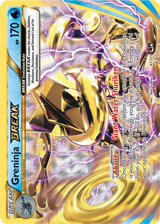 Fresh off a second-place finish at Worlds, Greninja BREAK doesn't lose much from the Standard format rotation. The older Greninja with the Water Shuriken Ability is no longer available, but the rest of the deck remains intact. The strategy is relatively straightforward but quite powerful: hope to start with Talonflame, use Frogadier's Water Duplicates attack to set up, and get a bunch of Greninja into play. Once Greninja BREAK is up and running, it's all about using Giant Water Shuriken to wear down the opponent. In the right environment, this deck can be a top contender.

What to watch for: The grim news for Greninja BREAK is that Startling Megaphone and Xerosic both rotated out of the Standard format, leaving no simple solution to deal with Garbodor's Garbotoxin shutting down your deck's entire strategy. Minccino can discard a Pokémon Tool from Garbodor, but it uses up the attack for the turn, and your opponent can just attach another Pokémon Tool on their turn. Perhaps a better method is to add Lysandre and a Pokémon with a big enough attack, such as Ash-Greninja-EX, to take down Garbodor. For the time being, Greninja BREAK might have to sit on the sidelines if Garbodor is getting used a lot. 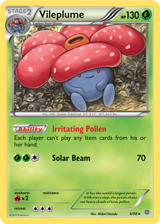 Sam Hough had success at Worlds with a rather unusual deck that could remain strong this season. The strategy starts with Vileplume's Irritating Pollen Ability, which prevents all Item cards from being played. Then it's all about picking the correct Pokémon for the situation: Regice can fend off Pokémon-EX with its Resistance Blizzard attack, Jolteon-EX can fight off Basic Pokémon with its Flash Ray attack, and Glaceon-EX can shut down Evolution Pokémon with its Crystal Ray attack. And with the unique Supporter card Ninja Boy, you can swap between these Pokémon at will. The loss of AZ really hurts this strategy, but perhaps a combination of Olympia and Manaphy-EX's Aqua Tube Ability can fill the void of that versatile card. Whenever Vileplume is involved, there's always a chance to lock down your opponent and win.

What to watch for: Thanks to Rainbow Energy, you can use pretty much any Pokémon you want in this deck to adapt to the current metagame. To really surprise an opponent, give Umbreon-EX a try. If its Endgame attack can Knock Out a Mega Evolution Pokémon, you'll take a whopping 4 Prize cards! 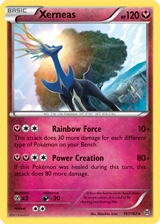 If you've ever wanted to just play a deck with tons of different types of Pokémon, then this is the deck for you. Xerneas's Rainbow Force attack does 30 extra damage for each different type of Pokémon on your Bench, and that damage can reach extraordinary numbers with the additional Bench space from Sky Field. Use Max Elixir and Double Colorless Energy to power up the Life Pokémon quickly, and start attacking as soon as you can. The new dual-type Pokémon from XY—Steam Siege offer quite a boost to this strategy, providing two types in a single Pokémon! Volcanion-EX and Galvantula won't attack very often, but they play a major role in this deck. There's no telling if this deck has what it takes to succeed in tournament play, but anything that packs a punch like this certainly has potential.

What to watch for: You could replace all of the Pokémon-EX in this deck with regular Pokémon, but it will make the deck considerably slower. Some potential candidates are Octillery, Bisharp, Mew, Carbink, and Hawlucha. There are plenty of Pokémon to pick from.

This only scratches the surface of the decks we could see in the upcoming Standard format. The metagame is always a mystery at the start of the season: plenty of other Pokémon have the potential to make some noise, and there might be excellent strategies that haven't even been thought of yet. The first major event using the new Standard format will be the Regional Championships in Orlando, FL. After that, everyone will have a better idea of what decks to expect. But until then, it's all about preparation and practice. Good luck, Trainers!

Bring the Heat with Volcanion-EX!

Break Down Barriers with Yanmega BREAK!