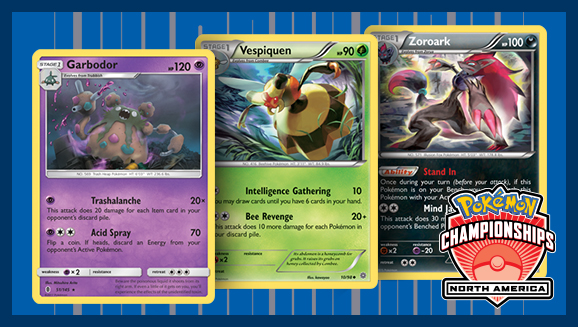 Eight Decks to Watch For at North American Internationals

This event is shaping up to be the largest one of the season, and there’s a lot on the line. For many players, this will be the final opportunity to earn enough Championship Points to qualify for the World Championships. For the very top players, it’s a chance to earn an elusive Day Two invitation to Worlds, which allows them to skip the first day of competition entirely. The top players in the world will be in attendance, all vying for the top prize of $10,000 and the title of North American International Champion.

The question on a lot of people’s minds is which decks will be popular going into the weekend...and which ones will be victorious. Right now, it’s difficult to predict the ever-changing landscape of competitive Pokémon TCG play. The metagame has seen a drastic change with the release of the Sun & Moon—Guardians Rising expansion. It’s a completely different environment compared to what we saw in São Paulo just a few months ago, and that should make for a thrilling tournament. Here are some of the top strategies heading into the North American International Championships.

Perhaps the biggest deck that players should worry about is one featuring Garbodor’s Trashalanche attack, which exploded onto the scene at the Seattle Regional Championships. Although its popularity fell a bit in the following weeks, it continues to be a top deck in the Standard format. The Trashalanche attack changes the way decks are built and the way people play the game. Whether Garbodor is partnered with Drampa-GX or Espeon-GX, this deck will be one to watch out for heading into the International Championships. For more information on this deck, check out our recent article.

After seeing little success for months, Vespiquen decks have seen a major resurgence, particularly with Jeffrey Cheng’s runner-up finish in Seattle and Michael Pramawat’s win in Madison, WI. Choice Band has been a major boon for the deck, allowing for much easier Knock Outs on big Pokémon-GX and Pokémon-EX. Right now, this looks like one of the powerhouses of the Standard format. However, it appears that more players are starting to add Oricorio (Sensu Style, with the Supernatural Dance attack) and Karen to their decks to counter the Bee Revenge strategy. We’ll have to see if Vespiquen can continue to thrive even as people adapt to it.

After Daniel Altavilla’s third-place finish in Madison and his win in Mexico City, the combination of Zoroark and Drampa-GX is a proven contender heading into North American Internationals. With Team Magma’s Secret Base to put some damage on your own Benched Pokémon, Drampa-GX’s Berserk attack can dish out a lot of damage quickly. Zoroark’s Mind Jack attack is great against strategies that need to put a lot of Pokémon on the Bench, and the additional damage from Choice Band or Professor Kukui makes it more dangerous. Throw in Zoroark BREAK to use the opponent’s attacks against them, and you have quite a versatile and powerful deck on your hands.

Among all of the great cards in the latest expansion, Metagross-GX is one that flew under the radar. That all changed with Christopher Schemanske’s runner-up performance at the Madison Regional Championships. The monstrous 250-HP Pokémon-GX is difficult for most decks to deal with, and it does just enough damage with the Giga Hammer attack to pose a constant threat. It’s a somewhat slow and clunky strategy, but it’s a juggernaut once everything is up and running. Play Max Potion to heal damage, use the Geotech System Ability a few times to rev up Metagross-GX, and then complete the process by smashing the opponent’s Pokémon with Giga Hammer. Repeat as necessary.

Throughout the 2017 season, Volcanion-EX decks have continued to evolve and adapt to the Standard format environment. The latest iteration of the deck moves away from speedy gameplay focused on Item cards and towards a slower, methodical pace that focuses on Stadium and Supporter cards. Brooklet Hill takes advantage of the fact that Volcanion-EX is also a Water type, which means the player doesn’t have to use Item cards to find it—a strong consideration when the Trashalanche deck is so popular. Turtonator-GX provides some explosive options with the Bright Flame and Nitro Tank-GX attacks, which helps to keep this deck a major player in the Standard format.

After dominating the Standard format for months, the duo of Decidueye-GX and Vileplume saw a sharp decline in popularity with the release of Sun & Moon—Guardians Rising. The introduction of Tapu Lele-GX seems to have weakened the power of Vileplume’s Irritating Pollen Ability, and the Trashalanche deck can give problems to this strategy that leans heavily on Item cards. Still, this deck remains a viable option, and it wouldn’t be surprising to see it do well at the International Championships.

Darkrai-EX was another dominant card in the Standard format that took a tumble with the launch of the new expansion. Early on, it relied on Exp. Share to keep Energy in play for the Dark Pulse attack, but Field Blower put a big dent in that plan. That version can still work, but some players are trying an interesting approach with Dragonair. The plan is to use the Dragon’s Wish attack, and then attach as many Energy as possible on the following turn to unleash a mighty Dark Pulse attack with Darkrai-EX. It sounds crazy, but it might be just crazy enough to work.

The Gyarados deck has been close to major success countless times, and it finally arrived after Alex Dao’s Regionals win in Birmingham, UK. It employs a rather unusual strategy: get Team Magma’s Secret Base into play, purposely damaging your own Magikarp so that Gyarados’s Full Retaliation attack can do more damage. With 6 damage counters spread across 3 Magikarp, the attack hits for a whopping 210 damage, which is enough to take down most Pokémon in one attack. The θ Double Ancient Trait allows Gyarados to have 2 Pokémon Tool cards attached to it, meaning it can have 2 Choice Bands at once! Machoke’s Daunting Pose Ability protects those vulnerable Magikarp on the Bench, warding off any pesky Pokémon looking to pick on them. Be on the lookout for the Gyarados deck!

These are a few of the decks you could see at the upcoming North American International Championships, but there are plenty of other competitive strategies out there. The event in Indianapolis is sure to be exciting and unpredictable. If you can’t attend in person, be sure to catch the live stream for all three days of the event at Pokemon.com/live. And as always, be sure to check back at Pokemon.com/strategy for the latest Pokémon TCG news and updates!