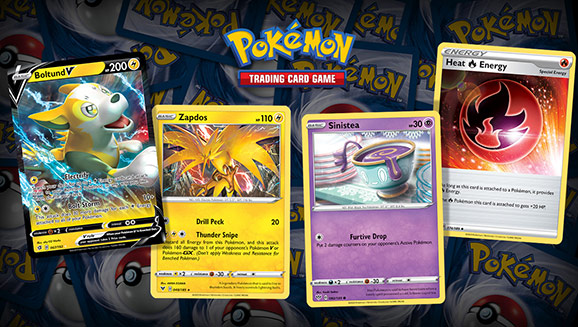 An Introduction to Deckbuilding: Learn How to Build a Pokémon TCG Deck


With so many interesting Pokémon to choose from and exciting strategies to explore, building your own deck is one of the most enjoyable and rewarding elements of the Pokémon Trading Card Game. Before you begin, it’s important to note that each deck must contain exactly 60 cards—with at least one Basic Pokémon—and cannot contain more than four copies of any card (except basic Energy).

There are a lot of ways to approach deckbuilding. Some decks focus on one type of Pokémon such as Fire type or Psychic type, while others may focus on an individual Pokémon’s Ability or particularly powerful attack. Decks can include an even distribution of Pokémon, Trainer cards, and Energy cards, or they can be heavily skewed to include, say, mostly Pokémon and virtually no Energy. With so many options available, the task can feel daunting even for the most intrepid deck builder.

The good news is a variety of methods can result in a winning deck! Let’s take a look at two of the most popular approaches to assembling a solid deck and the design principles that underpin them.


How to Build a Pokémon TCG Deck Around One Type

Like the teams of many of the Gym Leaders you’ll encounter in the Pokémon video games, a lot of successful Pokémon Trading Card Game decks include Pokémon that are almost all the same type. This approach to deckbuilding has merit because types are often thematic, which means Pokémon of the same type will favor a similar strategy. For example, many Fire-type Pokémon are designed to do loads of damage to the opponent’s Pokémon, whereas Metal-type Pokémon tend to have attacks, Abilities, and access to Trainer cards that prevent or reduce the damage they take from opposing attacks.

In addition, Pokémon of the same type usually use the same type of Energy to attack, and they can often be targeted by the effects of the same Trainer cards. This means it’s much simpler to design a deck around one type of Pokémon rather than many types.

We’ll use the following Lightning-type deck as an example:

As you can see, all the Pokémon and Energy cards in our example deck are Lightning type.


Choosing Pokémon for Our Deck

After choosing the type of Pokémon to build the deck around, the next step is to choose the Pokémon we want to include. When evaluating a Pokémon, it’s important to consider its Hit Points (HP), the damage done by its attacks for each Energy attached to it, any secondary effects of those attacks, and the ease at which the Pokémon can be put into play.

Pikachu & Zekrom-GX is one of the most powerful Lightning-type Pokémon around. For a cost of 3 Lightning Energy, it can do 150 damage to the opponent’s Active Pokémon and attach 3 more Lightning Energy to 1 of your Pokémon. Consider the strengths and drawbacks of Pikachu & Zekrom-GX compared with those of Ampharos V or an evolved Pokémon like Morpeko VMAX, and you can quickly see why it’s such a popular choice.

As a general rule, every deck should include a cast of Pokémon with attacks or Abilities that complement each other. Boltund V is the perfect partner for Pikachu & Zekrom-GX because the former’s Electrify attack can be used to power up the latter’s Full Blitz. Plus, Boltund V’s Bolt Storm attack does more damage for each Lightning Energy attached to all of your Pokémon. Tapu Koko Prism Star also earns a spot in this deck—its Dance of the Ancients Ability benefits both Pikachu & Zekrom-GX and Boltund V.


Filling Out Your Deck with Search and Draw

Although some decks fall out of this range, most decks include around 12–16 Pokémon, about half of which fill the role of attacker. When choosing Pokémon to include in the deck, priority should be given to those that can be searched for by the same Trainer cards as your main Pokémon. These Pokémon should work well together, and they’ll help save space in your deck by not needing their own different sets of supporting cards. If a Pokémon cannot be searched for, then it might be impossible to find when it’s needed in battle. Our Lightning-type deck uses Quick Ball, Electromagnetic Radar, and Cherish Ball to search for Pikachu & Zekrom-GX, Boltund V, and Tapu Koko Prism Star. This means the other Pokémon in the deck should also be Basic Pokémon and/or Pokémon-GX. 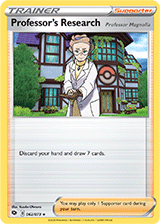 To better the chance that players can access key resources when they need them, all decks should include Supporter cards that draw cards from the deck. Professor’s Research and Marnie are two popular examples. Our Lightning-type deck also uses Dedenne-GX’s Dedechange Ability and the Speed Lightning Energy Special Energy card to draw more cards. As you can see, being able to get the card you need when you need it is crucial in the Pokémon TCG. It’s critical to look beyond ways to get a card at the right time besides simply drawing it at the start of your turn.

The remaining space in the deck should be dedicated to Trainer cards that enhance the player’s strategy or disrupt the opponent’s strategy. Trying to do both of these things typically means you’re not going to do that well at either one.

This is the portion of the deck that will differ the most between players because it is often a reflection of personal taste. For example, some players may choose to include the Chaotic Swell Stadium card to disrupt their opponent, while others may prefer the Viridian Forest Stadium card to guarantee they have access to the Energy cards required to attack.

The major weakness of a deck comprising one type of Pokémon is…just that! Pokémon of the same type often share a Weakness. This Lightning-type deck would have a difficult time in battle against a deck that attacks with Fighting-type Pokémon, as every Pokémon except Zapdos is weak to Fighting-type attacks.

Discerning deck builders add one or two Pokémon of a different type to their deck in order to mitigate the impact of a single Weakness. It can’t just be any Pokémon—it needs to be one that can utilize the same type of Energy cards as the other Pokémon in the deck, and one that is consistent with the deck’s overall strategy. For example, this Lightning-type deck could incorporate Mewtwo & Mew-GX or Cramorant V, which are not weak to Fighting-type Pokémon and can use Lightning-type Energy.


Building Your Deck Around Specific Pokémon

Let’s take a look at another approach to deckbuilding—focusing the strategy on one or two specific Pokémon rather than a type. The amount and type of Energy required for a Pokémon to attack varies, and you have to figure out how you’ll get the Pokémon into play, too. Not surprisingly, this means the decks themselves can vary wildly in the nature and spread of Pokémon, Trainer cards, and Energy cards. Fortunately, there are a few steps that deck builders can follow to make any Pokémon shine. Let’s use Polteageist from the Sword & Shield—Darkness Ablaze expansion as an example in our next deck.

Remember when we mentioned that most decks have about 12–16 Pokémon? This one has 26, taking up nearly half the deck, and only eight Energy! The guidelines are always just that—guidelines—and you should always be ready to boldly diverge from them when the time comes.


Identifying Core Cards for Your Deck

The first step is to identify the core components of the deck. These are the cards that are absolutely essential to the deck’s primary strategy. It’s often the case that there are four copies of important cards. The more copies of the same card in a deck, the more likely it is a player will be able to draw that card when it’s needed. You can see this in the example deck: Polteageist is a Stage 1 Pokémon, so we include four of it, but this also means the deck needs to include Sinistea, too. So, we also include the maximum four copies of it.

Polteageist requires 2 Colorless Energy to use its Mad Party attack. This means we need to add Energy cards to the deck, and they can be of any type! Two different Special Energy cards, Twin Energy and Triple Acceleration Energy, are the best choice for this deck because they provide at least 2 Energy when attached to Polteageist. And, once again, we include four of each of these Special Energy cards because they’re crucial to our overall strategy. 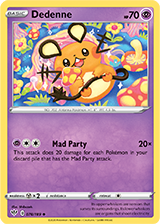 The next step is to ensure that the main Pokémon can be retrieved from the deck or discard pile when they’re required for battle. Notice how this Polteageist deck includes a variety of Trainer cards to achieve that goal—Quick Ball lets you search for Basic Pokémon like Sinistea, Evolution Incense lets you search for Evolution Pokémon like Polteageist, and Great Ball lets you search for both. Like the Lightning-type deck above, Polteageist also includes Supporter cards and Pokémon with Abilities that enable players to draw these core cards. Access to lots of cards, either by searching with Item cards like those mentioned above or by drawing a bunch of cards (like with Professor’s Research), is extremely important in virtually every deck.

Finally, we get to see what all those Pokémon in the deck are for. The strategy of this deck is to do loads of damage with Polteageist’s Mad Party attack. That being said, this deck should include many other Pokémon with the Mad Party attack, as well as ways to put those Pokémon into the discard pile. Dedenne and Bunnelby are great additions because they serve a dual purpose in this deck: they can attack using Mad Party, and they increase the damage of Polteageist’s attack when they are in the discard pile.

Every deck builder should seek to include cards in their deck that can serve a dual purpose. With the Polteageist deck in mind, consider the advantage gained by playing Quick Ball instead of Pokémon Communication, Roxie instead of Marnie, and Great Catcher instead of Boss’s Orders. There are basic similarities between these card pairings, but the differences are big enough to sway the outcome of battle. Deckbuilding is made of these small decisions that contribute to the overall result.

Now that you’ve read up on a couple of different approaches to deckbuilding, it’s time to build your own deck!

Remember, the deckbuilding process is all about experimentation, so don’t be disheartened if your first deck does not deliver positive results straight away. Discuss your ideas with friends, test out your ideas on the battlefield, and read on at Pokemon.com/Strategy to turn your deck into a World Championships contender.