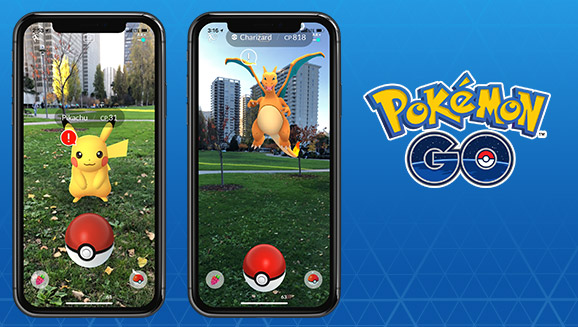 Catching Pokémon has never felt more real than in the Pokémon GO AR+ update for newer iPhones and iPads running iOS 11. Instead of just throwing Poké Balls at wild Pokémon, you'll be able to track them down in tall grass and sneak up so close that you can almost touch them. Not only is this method fun, but you can earn 100 extra XP and 25 Stardust if you catch a Pokémon after getting close enough. You'll also get to throw your Poké Ball from a much shorter distance.

If your iPhone or iPad is compatible with the new AR+ features, you'll see a message asking you to enable AR+ mode when you launch Pokémon GO. Capturing Pokémon is a much more engaging endeavor once you do. You'll need some physical space to make the most of this exciting feature, so we suggest using AR+ in areas like parks, where you can walk around freely.

With AR+ mode, wild Pokémon will no longer just appear in front of you when you first encounter them. Instead, AR+ will activate when you tap on a Pokémon. Look around for patches of tall grass. When you tap the grass, the Pokémon you found will jump out!

If you've encountered a rare Pokémon, you may want to give it a Nanab Berry before you approach it. This will make it easier to sneak up on, and it'll be much less likely to run away!

Once you're close enough to the Pokémon, the awareness meter will be replaced by a marker indicating that you've achieved the Expert Handler bonus. You're now good to start throwing Poké Balls, but take a moment to center your camera and judge your distance from the Pokémon. You'll likely be much closer to the Pokémon after the Expert Handler bonus appears than you would normally be out of AR+ mode. Be careful not to overshoot—make a very short, quick motion to throw.

If you like, you can continue to approach the Pokémon after the Expert Handler bonus appears. You may still spook the Pokémon by making sudden movements, and if you back up, the awareness meter will return. Pokémon in AR+ mode won't move side to side or jump around like other wild Pokémon, but they can still act up and block your Poké Balls, even once you're up close. Best of luck, Trainer!

Download Pokémon GO today for iPhone and iPad in the App Store.