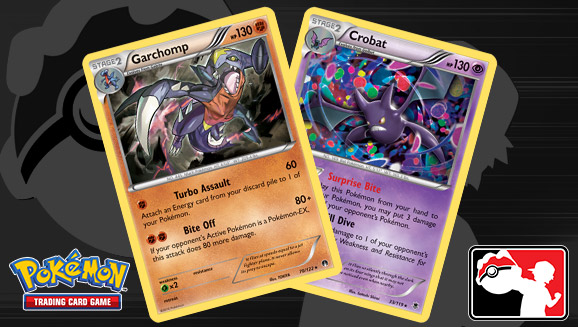 If you've spent some time playing the Pokémon Trading Card Game, you've certainly noticed the super-powerful and rare Pokémon that can change the tide of battle in an instant—cards such as Primal Groudon-EX. Those cards are indeed awesome, and you can surely win a lot of games by building a great deck around them—but you don't have to take that approach! Creative strategies using less-rare Pokémon are out there, and many are good enough to compete against even the most intimidating Pokémon available.

A great example of this kind of deck is built around Wobbuffet from XY—Phantom Forces, which appeared again recently in Generations. 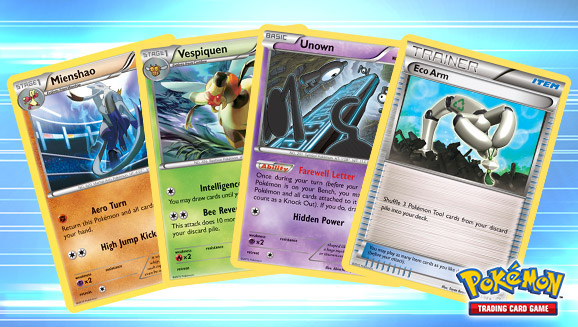 As long as Wobbuffet is your Active Pokémon, its Bide Barricade Ability can disrupt many strategies that rely on Pokémon with Abilities. The Psychic Assault attack isn't very powerful at first, but the damage starts to ramp up with the help of Golbat and Crobat. Their Sneaky Bite and Surprise Bite Abilities put damage counters on an opposing Pokémon, fueling Psychic Assault's damage potential. It takes a lot of math to be effective with this deck, but you might be surprised at how quickly the damage adds up.

Trainer cards are the backbone of every successful Pokémon TCG deck, and this one is no exception. The Dimension Valley Stadium card is crucial for reducing Wobbuffet's attack cost, so it can use Psychic Assault for a single Psychic Energy. Crobat's and Golbat's Abilities are essential to making this deck work, but a big problem is that you can use them only when they come into play. Super Scoop Up and AZ can return these Pokémon to your hand so you can re-use their Abilities. Muscle Band, Fighting Fury Belt, and Giovanni's Scheme are a few ways to increase the damage of your Pokémon's attacks, turning the tiny base damage from Wobbuffet's Psychic Assault into a much more formidable threat.

Finding your Pokémon quickly is important, and Trainer cards can help with that, too. This deck uses no Pokémon-EX, so Brigette is a great option to get three Basic Pokémon onto the Bench right away. The sooner you have a swarm of Zubat in play, the sooner you can start dropping damage counters with Golbat and Crobat. Level Ball, Ultra Ball, and Repeat Ball are more ways to find the Pokémon you need. To replenish your hand, Supporter cards such as Professor Sycamore, Professor Birch's Observations, and Judge can do the trick.

Our sample deck list is a starting point, but there are some highly sought-after cards you could consider adding if you manage to get them. VS Seeker is a card used in nearly every competitive deck, because it provides the flexibility to recover Supporter cards from the discard pile. It gives you the power to choose if you want to draw more cards with Professor Sycamore or use Lysandre to target an opponent's Pokémon. The Team Flare Hyper Gear card Head Ringer is another option to consider, potentially slowing down any opposing Pokémon-EX by increasing their attack costs. And if you don't have some of the Trainer cards to build this deck, here are some potential substitutions.

Bite Through the Competition

Next up, we're going to look at a deck that focuses on Garchomp from the recent XY—BREAKpoint expansion.

Garchomp is a Stage 2 Pokémon with two great attacks that cost very little. The big attack is Bite Off, which does 80 damage plus 80 more against Pokémon-EX. 160 damage usually isn't enough to take down a Pokémon-EX in one attack, but Garchomp's Fighting type gives it access to cards such as Strong Energy and Fighting Stadium, which can add some extra damage to seal the deal. The Turbo Assault attack is powerful as well, doing 60 damage while attaching an Energy from the discard pile to one of your Pokémon—and it's not limited to basic Energy, so you could grab a Strong Energy.

Korrina is a great Supporter card for this deck, giving you the ability to search for a Fighting-type Pokémon and an Item card to put into your hand. Being able to grab a Rare Candy and a Garchomp at the same time to evolve your Gible really helps speed up your strategy, or you could even find a Gible and a Level Ball if you need to get more Pokémon into play quickly. Focus Sash can come in handy as well, allowing your Fighting-type Pokémon to withstand a big attack and keep battling.

It takes a lot of resources to get several Stage 2 Pokémon into play, so having some support to draw extra cards is important. Octillery's Abyssal Hand Ability does the job in this deck, making sure you can refill your hand up to five cards every turn. It's great to search for a few specific cards with Korrina, but Octillery gives you a constant stream of cards so you can keep finding the Pokémon, Trainer cards, and Energy you need to smooth out your strategy. In desperate times, you can use Gible's Never Enough attack to draw cards as well, but with just 60 HP, it's likely to be taken down in short order if it's Active.

Like the Wobbuffet deck, our sample Garchomp deck is just a starting point. As always, VS Seeker is a great addition if you have any. Hawlucha is another card to consider. It's a Fighting-type Pokémon, so it benefits from all of the same cards that Garchomp does. It also fits the theme of hitting Pokémon-EX for a lot of damage, so it can be a great attacker early on to set up for a later Knock Out. If you want to include a Pokémon-EX, you could use Shaymin-EX instead of Octillery, but the risk of giving up two Prize cards is particularly dangerous in a deck that wants to force the opponent to fight through six regular Pokémon.

Hopefully this gives you a good starting point to jump into the competitive side of the Pokémon TCG without needing to stock up on the rarest and most powerful cards. Great decks with regular Pokémon are abundant and really fun to play. Look everywhere for cards that will suit your deck, too. For example, some of the Trainer cards we mentioned can be found in the Battle Arena Decks and even some theme decks, including Dark Hammer from the XY—Furious Fists expansion

Be sure to check out Pokemon.com/strategy for more deck ideas and updates on Play! Pokémon tournaments, and use the Event Locator to find tournaments near you. Good luck!