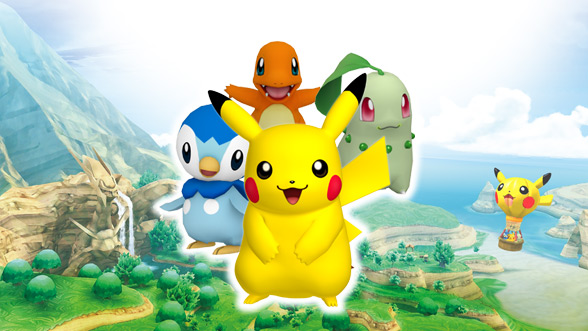 PokéPark Wii: Pikachu’s Adventure is now available on Virtual Console for Wii U! Experience the fun of playing as Pikachu just like when the game launched on Wii. Look for it in the Nintendo eShop.

Play as Pikachu and save the PokéPark in PokéPark™ Wii: Pikachu's Adventure!

Play as Pikachu as you run, jump, and smash your way through an action-packed adventure! You'll travel across land, sea, and sky to show off your speed and skill. Travel to all corners of the PokéPark to experience a variety of Zones and Attractions, as well as meet and befriend many Pokémon!

Give Mew a Hand!

Your adventure begins with Pikachu playing with its best friends, Chikorita, Piplup, and Charmander. Suddenly, Mew appears and takes them all to a strange new place—the PokéPark! Once they arrive, Mew explains that the PokéPark is in trouble. Until recently, the PokéPark was protected by an item called the Sky Prism. But the Sky Prism shattered recently, scattering its pieces all across the Park. It's up to Pikachu to collect the Sky Prism Pieces and save the PokéPark!

Get in the Zones!

As you progress through the story, you'll explore various Zones within the PokéPark, each with its own characteristics, such as the Beach Zone, Iceberg Zone, and Lava Zone. Different Pokémon will appear in each of the eight Zones. Within each Zone, you'll discover various Attractions, each run by an Attraction Chief. Compete in these Attractions to recover the Sky Prism Pieces!

In these Attractions, you'll use the Wii Remote™ controller in a number of ways to complete events such as footraces, tests of strength, or obstacle courses. Aim for your highest score or record time to complete the Attraction, and possibly earn a Sky Prism Piece! You can play Attractions as the friends you've met in the PokéPark, too. Some of the friends are better suited toward different events. For example, Pokémon such as Ambipom and Mankey are especially good at Venusaur's Vine Swing.

Playing as Pikachu, you must hurry to save the PokéPark by befriending Pokémon. You can befriend Pokémon in a number of ways, including by competing in Skill Games. There are a number of Skill Games that Pokémon will challenge Pikachu to play, including Battle, Hide-and-Seek, or Chase. Pikachu can build a friendship with most Pokémon simply by defeating them in a Skill Game. Once befriended, a Pokémon can be selected to participate in certain Attractions.

Many Pokémon inhabit the PokéPark, including some incredible Rare and Legendary Pokémon. Use special Passwords to unlock these incredible Pokémon. You might encounter Pokémon such as Jirachi, Groudon, Celebi, and Darkrai! In addition, Pikachu will show up with a variety of items via Passwords, including with a surfboard or snowboard.

Please see below for the full list of available passwords: 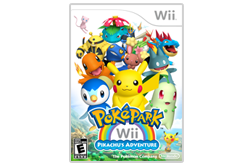