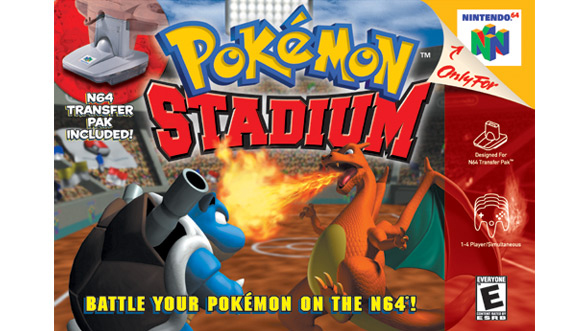 With help from the N64 Transfer Pak™ (a device that plugged into the N64 controller), Pokémon Stadium marked the first time a player could connect between handheld and console versions of Pokémon games.

Pokémon Stadium is the first game to show Pokémon in 3-D, giving N64 fans a chance to see their teams in a different way. With the N64 Transfer Pak, players can import and bring to battle Pokémon from their Pokémon Red Version, Pokémon Blue Version, and Pokémon Yellow Version games. Structured tournaments give Trainers of all skill levels an opportunity to test their strategies. And Pokémon Stadium is the ultimate location for multiplayer action on the N64.

In addition to providing a full 3-D battle experience, Trainers can also play their Pokémon Red, Pokémon Blue, and Pokémon Yellow games directly on the TV via the N64. Let everyone watch as you battle through Kanto on the way to the Elite Four!

If all the battling and trading gets you down, kill some time with nine minigames, including Sushi-Go-Round, a hilarious game featuring Lickitung and a whole bunch of spicy wasabi! 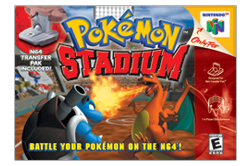