Eventually Pokémon RPGs, including Pokémon™ Emerald Version and Pokémon™ Mystery Dungeon, flourished on the Game Boy Advance, but Pokémon Pinball: Ruby and Sapphire was the only non-RPG game to grab the spotlight on the handheld system.

A follow-up to the exciting Game Boy Color game, Pokémon Pinball: Ruby and Sapphire adds even more fun to the exciting formula. Bunches of Pokémon highlight this installment, as well as game tables that are a must to try out.

Like the previous Pokémon Pinball, your goal is to rack up huge points in a pinball game that's anything but typical. Fire a Poké Ball into objects around the board to unlock minigames and catch Pokémon. Not only are you trying to score as many points as possible, you're also trying to fill a Pokédex, just like a regular Pokémon game! Are you up to the challenge of Pokémon Pinball: Ruby and Sapphire? 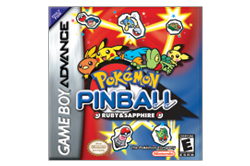