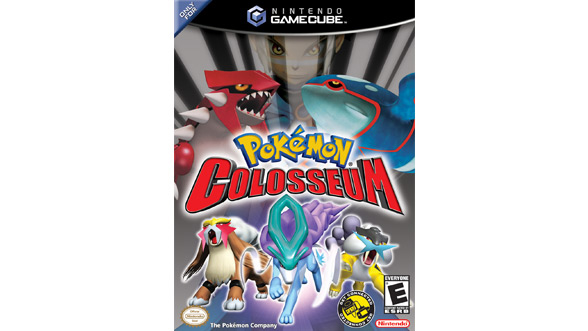 After lighter Pokémon fare in Super Smash Bros. Melee and Pokémon Channel, GameCube owners got their first huge helping of Pokémon with the game Pokémon Colosseum.

As the first full 3-D Pokémon adventure, Pokémon Colosseum doesn't disappoint! See all your favorite Pokémon as they take their exploits onto the GameCube system. The land of Orre has been besieged by shady characters known as Team Snagem, who have developed a way to steal Pokémon from other Trainers. You must travel around the region and rescue stolen Pokémon from these nefarious gangsters. Not only that, but the Pokémon that have been stolen have been infected and have turned into Shadow Pokémon! So you'll need to cleanse them of their curse, as well.

For Pokémon veterans, many aspects of Pokémon Colosseum will be familiar. All of the locations you know from the handheld Pokémon games are in the game—Poké Marts, Pokémon Centers, and even Pokémon Day Cares are available to you. The battle system too is very familiar, including the chance to fight in double battles, where smart strategy is as valuable as brute force.

There are all kinds of ways to battle just for fun in Pokémon Colosseum, as well as many stadiums in which these encounters can take place. You can use Pokémon you caught in the story mode, as well as the Pokémon from your Pokémon Ruby Version and Pokémon Sapphire Version games. Work your way through over 100 Trainers on the Mt. Battle challenge—a gauntlet guaranteed to test even your best Pokémon team!