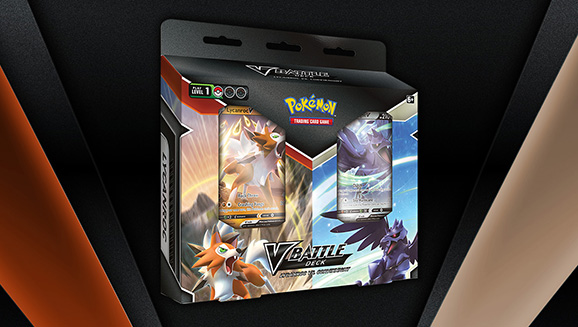 Prepare for a battle between two Pokémon V with this ready-to-play Pokémon TCG double deck bundle. The V Battle Deck—Lycanroc vs. Corviknight set includes two full 60-card decks, so you and a friend can face off.

Which of the V Battle Decks will you choose first? Both are centered around a powerful Pokémon V. There's Lycanroc V, a Fighting-type Pokémon whose Crashing Fangs attack hits your opponent's Pokémon for a whopping 200 damage but at the cost of preventing Lycanroc V from attacking during your next turn. Corviknight V is a Metal-type Pokémon with two attacks—Clutch, which does 30 damage and prevents your opponent's Pokémon from retreating, and Sky Hurricane, which hits for 190 damage but cannot be used during your next turn.

In addition to the two Pokémon TCG decks, this set includes eight additional Trainer cards that you can use to mix up your strategies. You'll also get some useful accessories like damage counters, a metallic coin, a guide to upgrading your decks, reference cards, and more that will help you be a more effective player.

Once you've played a game, switch up the decks and see what things look like from the other side—can you win with both Pokémon V?

The Pokémon TCG: V Battle Deck—Lycanroc vs. Corviknight is available in the Pokémon Center and where Pokémon TCG products are sold.