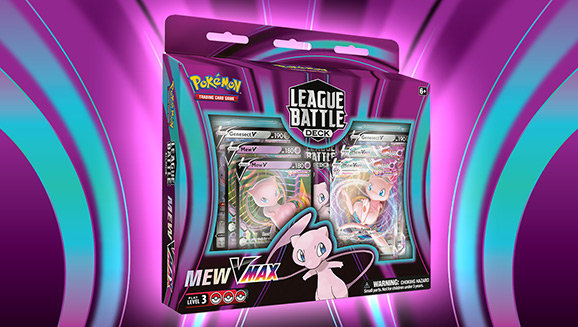 Team up with Mew VMAX and finish opponents with the power of Fusion Strike! This Pokémon VMAX is yours in this League-ready deck that's perfect for skilled Trainers and Pokémon TCG players. With a slew of cards including premium foil cards and a well-tuned set of Pokémon and Trainer cards, the Mew VMAX League Battle Deck features one of the most popular Pokémon of the Kanto region with the entire power of the Fusion Strike engine behind it.

Among the League Battle Deck's premium foil cards is none other than Genesect V—its powerful Fusion Strike System ability allows you to draw cards until you have as many cards in your hand as you do Fusion Strike Pokémon in play. Genesect V also has the Techno Blast attack, which does 210 damage for 3 Energy (but note that this Pokémon can't attack during your next turn). This attack cost can be fulfilled with Fusion Strike Energy, a Special Energy that can be used as any type of Energy for Fusion Strike Pokémon.

More often than not, Mew VMAX will be the Pokémon using Techno Blast in your Pokémon TCG battles. Mew VMAX's Cross Fusion Strike attack allows you to choose 1 of your Benched Fusion Strike Pokémon's attacks and use it as Mew VMAX's attack. When you have Genesect V on your Bench, Mew V can copy Techno Blast for just 2 Energy or a single Double Turbo Energy. Mew's free retreat cost also makes it easy to get in and out of the Active Spot so it can chain Techno Blast attacks with ease.

Harness the power of Fusion Strike and challenge your neighbors and friends, in person or online, with everything the Mew VMAX League Battle Deck has to offer.

The Pokémon TCG: Mew VMAX League Battle Deck is now available in the Pokémon Center and where Pokémon TCG products are sold.