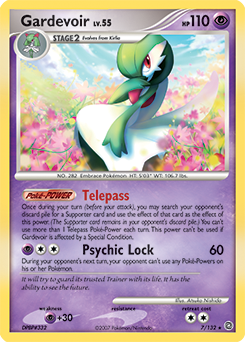 Once during your turn (before your attack), you may search your opponent's discard pile for a Supporter card and use the effect of that card as the effect of this power. (The Supporter card remains in your opponent's discard pile.)  You can't use more than 1 Telepass Poké-Power each turn. This power can't be used if Gardevoir is affected by a Special Condition.