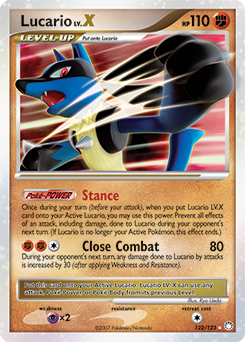 Once during your turn (before your attack), when you put Lucario LV. X from your hand onto your Active Lucario, you may use this power. Prevent all effects of an attack, including damage, done to Lucario during your opponent's next turn. (If Lucario is no longer your Active Pokémon, this effect ends.)

Put this card onto your Active Lucario. Lucario LV. X can use any attack, Poké-Power, or Poké-Body from its previous Level.