In our first trip to the Galar region, we explore a water-themed Gym and face off with its Gym Leader.

The Nintendo booth at this year's E3 show in Los Angeles was an exciting place for Pokémon fans. A large portion of the booth was dedicated to showing off the upcoming Pokémon Sword and Pokémon Shield games for the Nintendo Switch. The area was designed to look like a massive water-themed Pokémon Stadium, complete with large screens showing off the game, in-universe billboards, and a crowd of spectators and their partner Pokémon cheering on the players.

Of course, the booth-turned-stadium foreshadowed the highlight of our experience, the playable demo of Pokémon Sword and Pokémon Shield. We were able to play the demo ourselves, where we could battle our way through a (naturally) water-themed Gym before heading through a door that opened into an impressive Pokémon Stadium battlefield. There we could face off against the Gym Leader, Nessa, in an incredible battle that introduced massive Dynamax Pokémon into the gameplay.

Like many Gyms from previous games, this Gym Stadium tasks Trainers with navigating a fairly simple maze. There are multiple large pipes of three different colors—red, blue, and yellow—hanging above the paths, and they're pouring out large amounts of water. The player can't walk through these waterfalls, but there are color-coded switches throughout the maze that can turn the flow of water on and off. As you might expect, flipping the switches in the correct order is necessary to work your way to the end of the path. 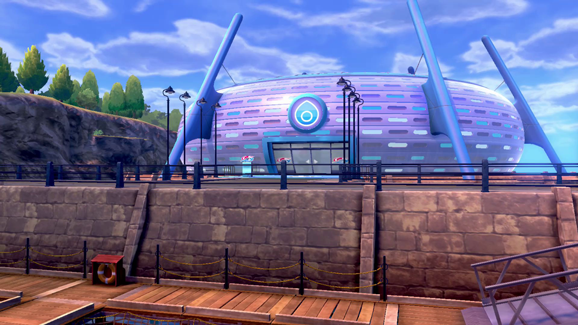 There are three Trainers waiting for you as you progress through the maze, and given the narrow pathways, there's no avoiding the gaze of any of them. Each Trainer brings only one Pokémon into battle, and given that the demo equips the player with a full party of six Pokémon (including all three of the new first partner Pokémon), none of them are terribly difficult to defeat. One Trainer sends out the newly revealed Gossifleur, but that Grass-type Pokémon didn't last long once our Scorbunny entered the battle. It was nice to see some previously discovered Pokémon representation as well when a Trainer sent Vulpix out onto the field. Good thing we had Sobble on our team to counter it!

Once all three Trainers were defeated, we wanted to heal up our Pokémon before taking on the Gym Leader. Fortunately, a quick chat with the person manning the Gym Stadium's entrance was all we needed to fully heal our entire team.

From there, a few more switches needed to be flipped in a precise order to open up the watery gate that blocked the way to our battle with the Gym Leader. As we passed through the door at the end of the maze, we were led through a darkened hallway into the wide-open stadium filled with cheering fans. The idea that Pokémon battles are treated as huge sporting events in the Galar region was made abundantly clear here. There was a bigger sense of grandeur and significance than we'd ever experienced in a Gym battle.

As we stepped out onto the field, we were introduced to the Water-type Pokémon expert, Nessa, as she walked out. She made it clear that she and her Pokémon were determined to win the match, and she certainly looked the part of a highly trained athlete. However, the Goldeen that she dramatically sent out into battle (with a Poké Ball throw worthy of a major-league pitcher) couldn't stand up to our Grookey. 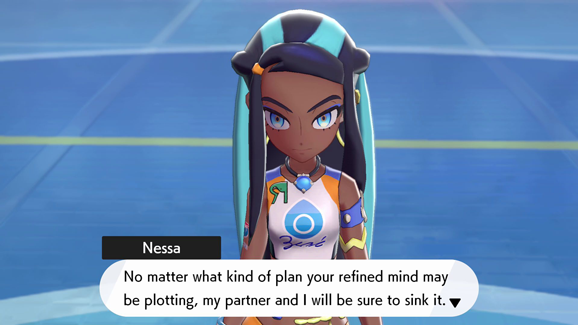 The real action started when Nessa unleashed her Drednaw. Suspecting what was about to happen, we took the opportunity to Dynamax our Grookey. It was a good decision—Nessa immediately Dynamaxed her Drednaw, and the stadium was quickly filled with two incredibly huge Pokémon ready to battle! Drednaw is a Water- and Rock-type Pokémon, putting our Grass-type Grookey in a pretty good position.

Dynamax Pokémon have new moves called Max Moves that hit hard, and all the ones we've seen also have additional effects. Our Grookey's Max Overgrowth, for example, was an extremely powerful Grass-type move that also created Grassy Terrain on the battlefield. Other Max Moves we saw could lower the opponent's Speed or Special Defense.

Even without a type advantage, Nessa's Dynamax Drednaw was able to do a solid amount of damage to our Dynamax Grookey, but it still wasn't enough to defeat us. After two turns (and remember, Dynamaxing only lasts for three turns), Grookey emerged victorious! Nessa was clearly upset about her loss, but she still turned over a Gym Badge.

This demo gave us a taste of what's in store in Pokémon Sword and Pokémon Shield, and it definitely left us wanting more. The new Dynamax feature adds an exciting (and cool to watch!) element to Pokémon battles, and it will be fun to see just how far we can push our giant Pokémon partners.

For more information about Pokémon Sword and Pokémon Shield, head over to the official site, and be sure to check out our E3 interview with two of the games' creators—Junichi Masuda, the games' producer, and Shigeru Ohmori, the games' director. 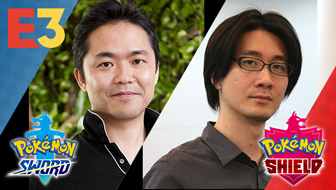 We Chat with the Creators of Pokémon Sword and Pokémon Shield