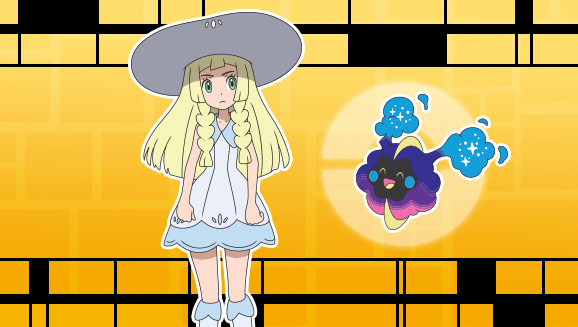 When Pokémon fans were introduced to the tropical Alola region, a host of wonderful new characters tagged along. One of the most memorable is Lillie, a girl who is instantly recognizable by her flowing blonde hair, her white sundress, and the wide-brimmed hat she frequently wears.

Lillie's character varies a bit depending on the medium, but whether you're familiar with her through the Pokémon video games or the animated series, she is always portrayed as a caring girl who loves Pokémon and will go to great lengths to protect them, growing as a person in the process. Her character is also greatly influenced by her relationships with her brother, Gladion, and her mother, Lusamine. And in the Pokémon Trading Card Game, many a Trainer has relied on her presence to aid them to victory.

Let's take a closer look at Lillie, a Pokémon Trainer who constantly proves to be a good friend to human and Pokémon alike.

We're introduced to Lillie in the first episode of Pokémon the Series: Sun & Moon when Ash arrives on Melemele Island in the Alola region (“Alola to New Adventure!”). Lillie comes from a wealthy family and lives on a large estate, and she attends the island's Pokémon School. Although she's knowledgeable about and fond of Pokémon, we quickly learn that she has a peculiar phobia—she can't bring herself to touch them! Even friendly Pokémon like Ash's Pikachu cause her to recoil in fear. 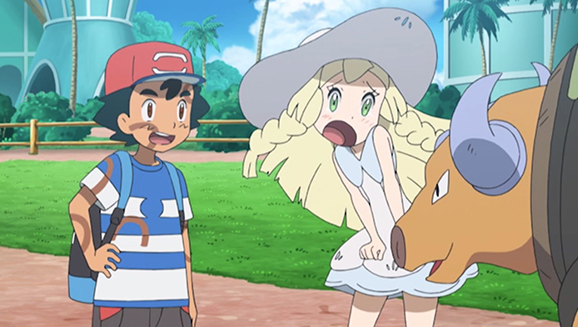 Over the course of the show's 20th season, Lillie learns to overcome her fear of touching Pokémon, starting when she receives a Pokémon Egg as part of a class assignment (“Lillie's Egg-xhilarating Challenge!”). Lillie learns to care for the Egg, but when it eventually hatches to reveal an Alolan Vulpix she names Snowy, she shows her usual reluctance to touch the Pokémon. During a Team Rocket attack, however, Lillie instinctively rushes to Snowy's defense, grabbing her partner to save it from falling (“Getting to Know You!”). 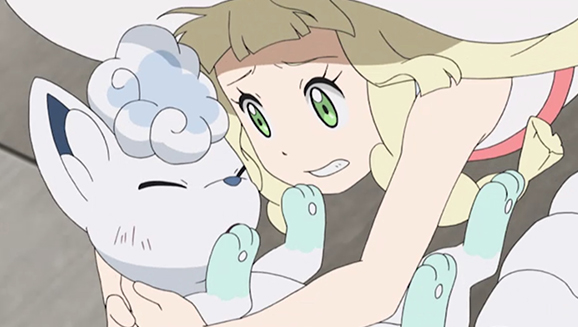 Of course, Lillie's family plays an important role in her story in the animated series. Although her brother Gladion shows up briefly in the previous season, it's the current season, Pokémon the Series: Sun & Moon—Ultra Adventures, that really builds the family dynamic by introducing Lillie's mother Lusamine, the mysterious Pokémon known as Nebby, and the Aether Foundation in a storyline that will be familiar to fans of the video games.

We learn more about Lillie's past and how a traumatic encounter with a frightening Pokémon years ago triggered her fear of touching Pokémon (“Mission: Total Recall!”). When Lusamine is grabbed by an Ultra Beast and taken into an Ultra Wormhole, Lillie shows fierce determination and joins Gladion to venture into the unknown and free her (“Rescuing the Unwilling!”). After the rescue, Lusamine asks Lillie and her classmates to join the Ultra Guardians, a team dedicated to protecting Alola from Ultra Beasts (“The Professors' New Adventure!”). 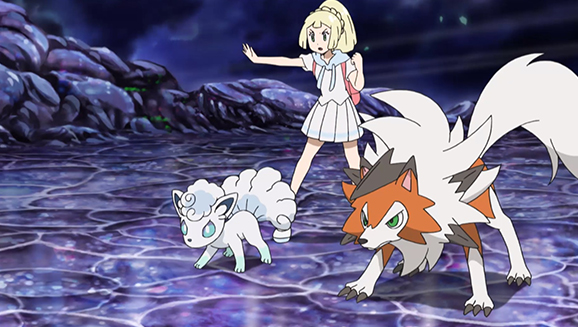 Lillie is one of the first people the player encounters at the start of Pokémon Sun, Pokémon Moon, Pokémon Ultra Sun, and Pokémon Ultra Moon. After the player rescues Lillie's friend, a Cosmog named Nebby, from a flock of angry Spearow, she becomes a reliable ally throughout the player's journey across the Alola region. Initially, she shows the player around, pointing out important places and filling them in on Alolan lore. She then leaves the player as she goes off on her own journey to help Nebby—a clear sign that she's becoming a stronger person. She does eventually rejoin the player at the end of the game, and her actions there help steer the story along to its exciting climax.

Lillie expressly states that she is not a Pokémon Trainer. She isn't a fan of Pokémon battles (she dislikes seeing Pokémon get hurt), but she's happy to support the player on their quest. Lillie lives with Professor Kukui and works as his assistant, but we soon learn that there's significantly more to her story.

The revelations begin to emerge when Lillie and Nebby are kidnapped by Team Skull, and Gladion (a former Team Skull enforcer) appears to lead the player to Aether Paradise on a rescue mission. It is there that we learn that Gladion is Lillie's brother—and Lusamine, the president of the Aether Foundation, is her mother. Nebby, it turns out, was being used in experiments by the foundation in an attempt to open an Ultra Wormhole. Lillie, fearing for the little Cosmog's safety, liberated it from the lab and escaped.

Upon returning to the lab, however, Lusamine successfully opens the Ultra Wormhole and enters it. Although a lesser individual might shy away from fighting back under such circumstances, this event instills Lillie with confidence. Shortly after, she appears before the player with a new outfit and hairstyle, vowing to save Nebby and her mother. This courageous new Lillie refers to her makeover as her “Z-Powered form.”

Lillie makes good on her newfound confidence when she accompanies the player to the Altar of the Sunne or the Altar of the Moone (depending on which game is being played) and makes the bold decision to allow Nebby (who has now evolved into either Solgaleo or Lunala) to travel with the player instead of with her.

The end of Lillie's story varies between Pokémon Sun/Pokémon Moon and Pokémon Ultra Sun/Pokémon Ultra Moon. In Pokémon Sun and Pokémon Moon, she returns to Aether Paradise to care for her mother after the rescue. It is later revealed that she has decided to leave the Alola region, and she sets off to Kanto to have an adventure of her own as she hopes to find treatment for the injuries that her mother sustained inside the Ultra Wormhole.

In Pokémon Ultra Sun and Pokémon Ultra Moon, Lillie eventually reveals that she has decided to become a full-fledged Pokémon Trainer and even joins the player in the battle against Team Rainbow Rocket, taking part in a Multi Battle against Faba and an Aether Foundation employee. She even becomes a potential Multi Battle partner in the Battle Tree—quite a change from the girl who couldn't bear to see a Pokémon get injured in battle! 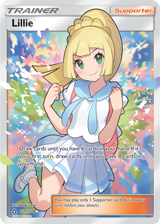 Although you may not see this card in many top tournament decks, it's a solid Supporter card and a reliable way to replenish your hand after you've played most of your cards. The card proved popular enough that it was reprinted in the special Shining Legends expansion, and it received updated artwork when it appeared again in the Sun & Moon—Ultra Prism expansion.

The early versions of the Lillie card depict her in her original outfit, complete with her large hat and the bag in which she hid Nebby in the video games. She sports a determined, somewhat angry expression on these cards. When Lillie reappears in the Sun & Moon—Ultra Prism expansion, she is wearing her “Z-Powered form” outfit and a confident smile. Even in the Pokémon TCG, we can see the evolution of Lillie's character.

Lillie's transformation from a meek, timid person into a brave and confident Pokémon Trainer makes her one of the more interesting characters in recent Pokémon lore. Hopefully, she will continue to be a strong presence in the series in the future!

Check back next month for our next featured Trainer.