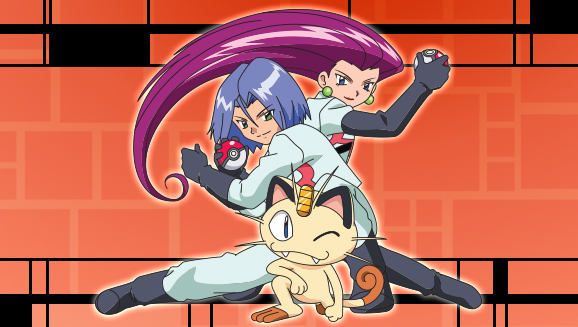 This month's Trainer Spotlight features the most talented and stylish Trainers around. Forget those stuffy Gym Leaders and those self-important Champions—these Trainers are the real stars!

The lovely Jessie, the charming James, and the incredible talking Meowth step into the spotlight they deserve for this month's Trainer Spotlight.

Jessie, James, and Meowth first appear in the second episode of Pokémon the Series, “Pokémon Emergency!” They effortlessly take over the Viridian City Pokémon Center, only to have their genius scheme interrupted by an unbelievable Pikachu. A Pikachu powerful enough to defeat these magnificent members of Team Rocket is clearly very valuable, so the group's mission for most of the series is born: capture Pikachu and deliver it to the Boss.

Outside of their sleek Meowth-shaped hot-air balloon, they don't seem to receive the budget one might expect from a huge criminal organization. They make up for it with impressive creativity. They're masters of disguise and savvy enough to avoid trying to capture such a powerful Pikachu directly in Pokémon battles, typically engaging first with traps (“Plant It Now... Diglett Later”) and even giant robots (“An Elite Coverup!”).

Despite their vocation as Pokémon thieves, they're really not bad people. Team Rocket deliberately allow themselves to be defeated in battle in “The Problem with Paras” to help Paras evolve, and Jessie and James go so far as to battle against Meowth when he's mistaken for a child's hero (“The Purr-fect Hero”). They even show empathy to Ash's Charizard, helping it become accepted in Charicific Valley by allowing it to destroy their robot (“Charizard's Burning Ambition”) to “save” the training ground. You might even confuse them for the do-gooders they team up with when they go against Team Plasma (“What Lies Beyond Truth and Ideals!”) and more inadvertently against Team Magma (“Stairway to Devon”).

Jessie mixes beauty with the attitude it takes to get things done. The once-aspiring Pokémon nurse (“Ignorance Is Blissey”) has found her calling in Team Rocket—and perhaps as a Top Coordinator.

Several Pokémon Coordinators with a conspicuous resemblance to Jessie—Jessilina, Jessibella, and Jessica, just to name a few—have proven quite capable in Pokémon Contests. This medium is a perfect fit for Jessie, allowing her to show off her creativity, sense of style, and battling ability. She's been so successful in this realm that it's clear she could have a second career—she made it all the way to the semifinal round of the Sinnoh Grand Festival (“Coming Full-Festival Circle!”). A certain Twerp who wants to be a Pokémon Master has only achieved that placement in a major region's Pokémon League competition twice, and he's been trying for 20 seasons!

The roguish James came from a life of luxury (“Holy Matrimony!”), but he's left that all behind to live a more adventurous life of freedom in Team Rocket.

James is a surprisingly caring Pokémon Trainer, and many of his Pokémon are extremely affectionate toward him—often expressing that affection in ways that seem quite painful. Perhaps due to his sheltered upbringing, James has been tricked into making some regrettable purchases—like a suspicious salesman's Magikarp (“Pokémon Shipwreck”). He's also known to collect Poké Balls (“First Catch in Alola, Ketchum-Style!”) and bottlecaps (“All That Glitters!”), an item Team Rocket repurposed for a clever scam at the Indigo Plateau Conference (“The Fourth Round Rumble”). Perhaps he was just ahead of the curve on Hyper Training?

The third member of Team Rocket is certainly its most surprising. His ability to speak human language is impressive, but the origin of this skill is a sad tale. He learned to speak to impress a lady Meowth named Meowzie who preferred humans to other Pokémon, but instead of accepting him, Meowzie viewed him as a freak (“Go West, Young Meowth”). Heartbroken, he found his true home in Team Rocket.

Despite being a Pokémon, Meowth rarely engages in Pokémon battles, instead providing witty commentary and helping the team execute plans. He has occasionally allowed Jessie to give him orders in battle—notably in an attempt to win a set of Pokémon Princess Dolls (“Princess vs. Princess”) and in a Pokémon Contest (“Mean with Envy”)—which typically results in failure. But in the end, Meowth is the sort of Pokémon most Trainers would love to team up with. He's cute, he's charismatic, and all he really wants is to make the Boss happy.

To Unite All Peoples

Their first appearance is in Pokémon Yellow, where Jessie and James appear as the most chic of opposing Trainers. They seem to have received a well-deserved promotion in Pokémon Yellow compared to Pokémon the Series, as they are key to each of Team Rocket's plans. They have four climactic battles with the player—trying to claim Fossils in Mt. Moon, threatening Mr. Fuji in Lavender Town, and defending Giovanni in Celadon City and Saffron City. Battles with Jessie and James include a truly rare sight—Meowth engaging in a fair Pokémon battle!

Team Rocket makes a particularly memorable appearance in Pokémon Puzzle League. Not only is the terrific trio a challenging foe in the 1P Stadium mode, but they also star in the Spa Service mode. Ash visits a spa hoping to relax, only to discover the spa is a trap by Team Rocket, who abduct Bulbasaur and Squirtle as part of their ingenious plan. Discerning players also know that there's no better character to select in 2P Stadium than Team Rocket themselves.

This flamboyant trio are rarely noted for their subtlety, but their final video game appearance may have eluded you. Back in 2001, a small LCD video game system featuring a small library of cartridges called the Pokémon mini was released. One game for the Pokémon mini, Pokémon Zany Cards, includes a variety of different card games and opponents to play against. Jessie and James appear as the first opponents in both the Wild Match and Special Seven game modes.

Blast Off at the Speed of Light 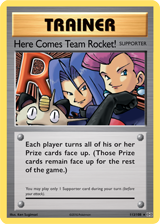 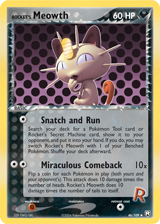 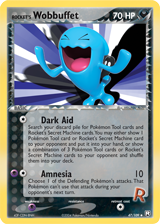 A version of Team Rocket appears in the Electric Tale of Pikachu manga, a separate series from Pokémon Adventures that more closely follows the story line of Pokémon the Series. Team Rocket again works to liberate Pikachu from Ash's clutches in this series. Team Rocket has also appeared in each of the Pokémon movies—even Pokémon the Movie: I Choose You!

Throughout all of Team Rocket's appearances, one thing is clear—you'll never find a more stylish, charismatic crew than Jessie, James, and Meowth. There's no way next month's featured Trainer will be able to compare! 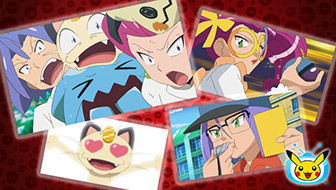 Prepare for Trouble on Pokémon TV! 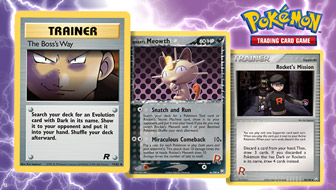 Check out Team Rocket’s storied history of causing trouble in the Pokémon TCG. 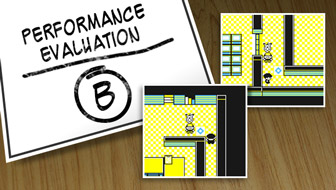