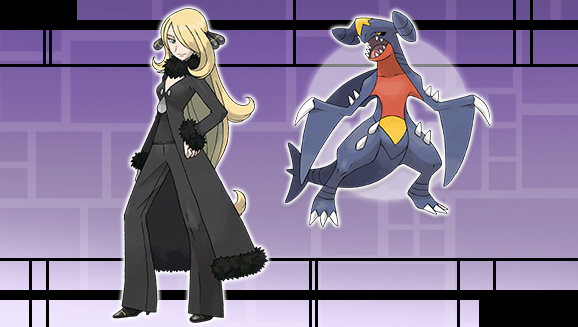 Pokémon battles are won and lost, but the legends of Trainers and their Pokémon live on. With this monthly series, we'll highlight a Pokémon Trainer who's made their mark on the world of Pokémon.

Our first featured Trainer exemplifies the ideals that noble Pokémon Trainers strive for. She's achieved the title of Champion, but she continues to challenge herself in competitions such as the Pokémon World Tournament and the Battle Tree. She's formidable in battle, but she's also known for her scholarly pursuit of the lore of Legendary Pokémon. And she's a kind Trainer who offers keen advice to Trainers aspiring to be the very best.

This month, our spotlight is on the Champion of the Sinnoh region, Cynthia.

Cynthia is one of the most powerful opponents in the Pokémon video games. She transcends even other Champions with her persistence as well as her skill—she's a potential opponent in eleven different games, and her teams of diverse, experienced Pokémon make her formidable in each encounter.

Her trademark Garchomp and the rest of her team present a challenging final hurdle for Trainers looking to become Champion in Pokémon Diamond, Pokémon Pearl, and Pokémon Platinum Version. Defeated, she travels to Undella Town in Pokémon Black, Pokémon White, Pokémon Black 2, and Pokémon White 2 Versions, where a new protagonist gets the chance to battle her. This encounter shows off her true power, as all of her Pokémon have achieved levels unmatched by almost any other foe. Her house even becomes something of a getaway for Unova's powerful Trainers, as Caitlin, Elesa, Iris, Lenora, Shauntal, and Skyla occasionally visit.

In each of her appearances, her team includes Garchomp, Lucario, and Spiritomb, with Togekiss, Milotic, and Roserade most commonly filling out the roster. She's also used Eelektross and Braviary in Unova, Gastrodon in Sinnoh, and Glaceon at the Pokémon World Tournament, showing off an impressive range exhibited by few other Trainers. You can even form something of a dream team by joining up with her for Multi Battles at Alola's Battle Tree.

Cynthia's interest in the lore of her world helps set her apart from other Champions. She provides the player with much of the story of the Celestic Ruins and Giratina in Pokémon Platinum Version, and her insight is invaluable as the player navigates the Distortion World. She can be found researching the Mythical Pokémon Arceus at the Sinjoh Ruins in Pokémon HeartGold and Pokémon SoulSilver, where she and the player may make an incredible discovery: an Egg that hatches into Dialga, Palkia, or Giratina. 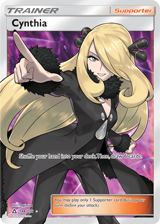 Cynthia has made her mark in the recently released Sun & Moon—Ultra Prism expansion with a Supporter card. This reliable card is likely to find a place in almost every competitive deck, and it even provides a fun touch by combining nicely with her partner Garchomp.

Two Supporter cards from the booster packs of yesteryear also prominently feature Sinnoh's Champion: Cynthia's Guidance and Cynthia's Feelings. Cynthia's Guidance focuses on quality over quantity by allowing you to look at the top 7 cards of your deck and put 1 into your hand. Cynthia's Feelings is more reminiscent of the new Cynthia—you shuffle your hand into your deck and draw 4 cards, and if one of your Pokémon just got Knocked Out, you get to draw 8 cards instead.

Cynthia's Pokémon aren't left out of the fun, either. Her Garchomp, Milotic, and Lucario all appear in the Platinum—Supreme Victors expansion released in 2009. Her team in that expansion includes a surprising addition—a Rayquaza with an attack that does 200 damage (quite a lot for back then)! 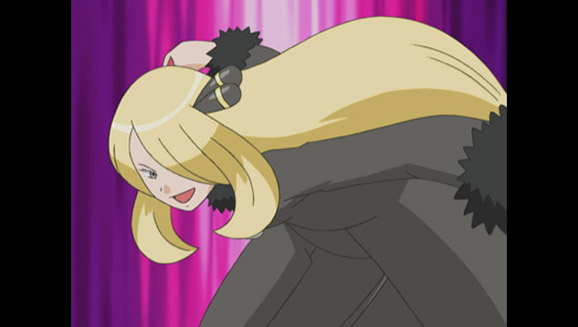 Cynthia maintains her role as the Champion of the Sinnoh region in Pokémon the Series, but here she seems to be inundated with challengers. What's a strong woman to do but crush contenders with stunning efficiency?

She battles an incredible array of famous Trainers throughout the series, including Elite Four members Aaron, Flint, and Lucian, as well as Frontier Brains Caitlin and Palmer. Despite her opponents' accolades, Cynthia never loses a single battle, even winning televised matches against Aaron (“Aiding the Enemy”) and Flint (“Memories Are Made of Bliss”). Her performance leaves quite an impression on Ash and his friends—especially when she effortlessly defeats his arrogant rival, Paul, in “Top-Down Training.”

Cynthia establishes herself as a compassionate Trainer as well as a powerful one. After defeating Paul, she personally heals his Pokémon in the absence of Nurse Joy. And just as her Garchomp is dominating a battle with Iris's Axew in “All for the Love of Meloetta!,” she calls the match off before Axew can be hurt. Cynthia freely gives advice to Ash and his friends—and even rivals like Paul and Trip—with each encounter.

Her interest in the lore of the world and Legendary Pokémon leads her to become involved in many climactic battles. Cynthia helps Ash and his friends in their attempts to stop Team Galactic from stealing the Lustrous Orb in “Losing Its Lustrous!” and “A Double Team Turnover.” She's also a key player in the decisive battle against Team Galactic, helping thwart their attempts to capture Uxie, Mesprit, and Azelf in “The Needs of the Three!” and “The Battle Finale of Legend!” She returns to combat Thundurus, Tornadus, and Landorus in “Meloetta and the Undersea Temple!” and “Unova's Survival Crisis!”


Even considering all these memorable moments, Cynthia's presence extends further still. She plays a pivotal role in the Sinnoh arc of the Pokémon Adventures manga, again helping to combat Cyrus and Team Galactic. She and her Garchomp were even immortalized as Nendoroid figures—hand-painted, posable figures with customizable expressions and features (check them out at the Pokémon Center)!

It's hard to think of a Trainer who's been more influential in the world of Pokémon than our inaugural spotlighted Trainer. Check back next month for our next featured Trainer.