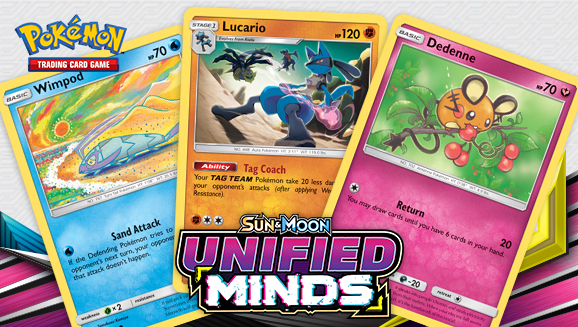 When you’re playing the Pokémon Trading Card Game, it’s easy to get so wrapped up in the excitement of a match and the attacks of your Pokémon that you overlook the wonderful artwork on the cards. Now that the latest Pokémon TCG expansion, Sun & Moon—Unified Minds, has arrived, we want to step back and take a closer look at the images that ground those attacks and show off the personality of the Pokémon behind the mighty moves. Are the Pokémon just having fun, or is this some sort of power play? 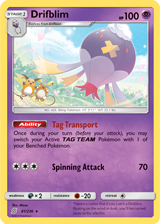 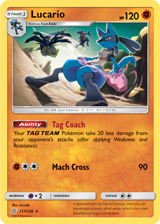 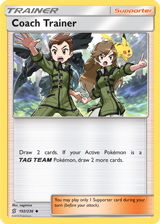 Recent Pokémon TCG expansions have introduced incredibly powerful TAG TEAM pairings featuring two Pokémon combining their strengths. These cards have incredibly high HP and devastating GX attacks that you can enhance with the addition of extra Energy. In Sun & Moon—Unified Minds, it seems that the TAG TEAM Pokémon aren’t even content to remain on their own cards! Just check out Drifblim—you can see Raichu and Alolan Raichu dancing right behind it. This cheerful duo also photobombs Kangaskhan’s card. Garchomp and Giratina make a more aggressive appearance on Lucario’s card, where they’re clearly set to attack. Luckily for Meloetta, it doesn’t seem to be in any immediate danger despite that powerful pair appearing on its card as well.

Even Supporter cards can feature TAG TEAM cameos! Pikachu and Zekrom first appeared together back in the Sun & Moon—Team Up expansion (which introduced the TAG TEAM concept), but they’ve returned to help out the Coach Trainer duo here.

Fittingly, the cards featuring these guest appearances also have attacks, Abilities, or effects that involve TAG TEAM Pokémon you have in play. 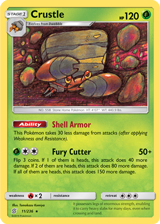 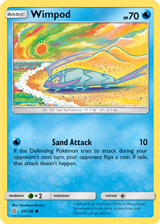 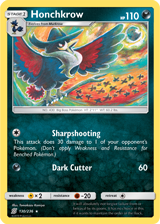 Artists often illustrate more than one Pokémon in each expansion, and this time around, the work of Tomokazu Komiya really stands out. His sketchy style has a sort of rough feel that gives the Pokémon a wild vibe. Just look at Crustle here—the Pokémon is hiding in a dark, rocky cave. Komiya depicts the darkness of the environment through excessive shading made with harsh, almost angry-looking crosshatching. On the opposite end of the spectrum, Wimpod’s card is bursting with bright colors. The multicolored sky and sea lend an expressionistic air to the illustration. Komiya’s expressionistic style continues with Honchkrow—just look at that sky filled with swirling colors. We love the way the light shines off the flock of Pokémon (Murkrow, perhaps?) in the background. Noctowl’s card features more traditional lighting, but Komiya plays with perspective a bit to show the Pokémon during a fierce attack. We wouldn’t want to be on the receiving end of those talons! 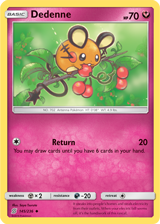 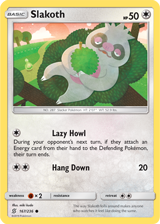 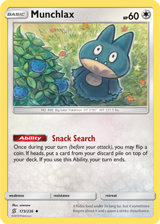 Everyone needs to eat—even Pokémon! Luckily for our Pokémon friends, when they’re out in the wild, they’re never too far from some delicious berries upon which they can munch. Cheri Berries seem to be a popular choice, enjoyed by both Axew and the adorable Dedenne. Slakoth is more than content to laze the day away up in a tree as long as it has a tasty Durin Berry to keep it company. We’re imagining that Durin Berry will be slo-o-o-w-ly eaten over the course of several hours. On the other hand, we’re not counting on those Oran Berries that Munchlax is scoping out to last long. Just look at the longing in Munchlax’s eyes! That little Pokémon is not prepared to hold back. Bidoof seems to be hard at work building its nest alongside a flowing stream, but it’s interrupted by an errant Sitrus Berry that comes to rest against the rock it’s standing on. Judging by Bidoof’s expression, it’s probably time for a lunch break, even if its construction project has hardly begun. Who can blame it? Pokémon love berries! 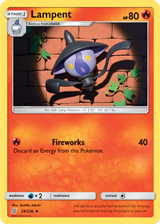 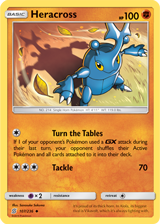 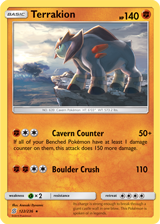 Shadows can be an effective art technique to help set the mood of a piece, and that is certainly the case in the Pokémon TCG. As the Lamp Pokémon, one might expect Lampent to be constantly casting shadows, and that is certainly the case on its card here. This Lampent is illuminated by a spotlight, resulting in a dark shadow behind it. The shadow adds a good amount of depth to the image, making Lampent look like it’s popping off the card. Careful use of shadows can also be used to increase drama. That long, fighting-stance shadow behind Heracross suggests that a threat’s approaching fast. Combine that with the blowing wind and Heracross’s upward gaze, and we’re wondering what sort of battle is about to take place. Likewise, Terrakion is bathed in shadow as it stands upon a cliff overlooking a bright valley. The shadows here are used to evoke emotion—the somewhat forlorn-looking Terrakion seems to be staring out at a brighter future. 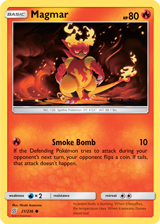 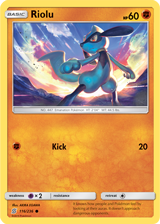 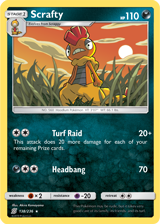 It’s one thing to do well in a Pokémon battle. It’s another thing entirely to look super cool while you’re doing it. Take Magmar, for example. From the wispy flames and billowing smoke behind it, we can assume that it just pulled off a powerful fire attack. But as Magmar walks away from the devastation, it’s coolly adhering to one of the most important rules of action heroes: NEVER LOOK BACK AT THE EXPLOSION YOU JUST CAUSED. So awesome. Riolu hasn’t yet done any damage, but its pose indicates that it’s about to—its legs are set in a wide, sturdy stance, and its arms are stretched out and ready to strike. And to pull off that pose when the sun is just over the horizon, sending streaks of light out through the clouds and past the surrounding mountains? So awesome. Scrafty may not appear to be in a classic battle stance, but judging by its posture and determined expression, it’s clearly standing its ground. And what better place to stand your ground than in a field filled with tall, blowing grass as the burning sun hovers dramatically over your shoulder? How many great duels have been fought in a setting just like this? So awesome. Maybe striking cool poses while you play the Pokémon TCG will help improve your game. At the very least, it’s bound to confuse your opponent.

Of course, this is just a small sampling of all the stunning artwork you’ll find in Sun & Moon—Unified Minds. As you’re playing the game, be sure to take a few moments to appreciate just how nice the Pokémon look. You’re bound to find several cards that speak to you on an artistic level!