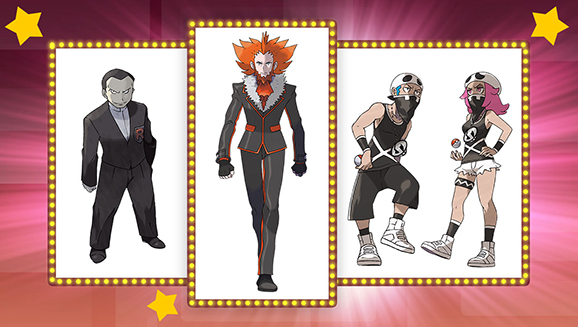 Test Your Knowledge of Pokémon’s Villainous Teams with This Quiz

Prepare for trouble and double down on your knowledge of Pokémon to see if you possess the nefarious knowledge needed to be a baddie.

The world of Pokémon is filled with teams of malevolently memorable villains that need to be stopped before their wicked schemes are realized. Although we would certainly never encourage Trainers to participate in malicious behavior, it could be helpful to get into the mindset of these fiendish foes to understand the way their crooked minds work. This quiz will let you see just how well you know the troublesome troupes that love to interfere with our Pokémon journeys.


1. In Pokémon the Series, who are the two Team Rocket members who occasionally clash with fellow members Jessie and James?

2. What team, led by Lysandre, should you be on the lookout for when traveling in the Kalos region?

3. What gloomy, walled-in town in the Alola region serves as Team Skull’s base of operations?


5. Which team encountered on the island of Pasio is known for their trademark matching masks?

6. Which group—known for their devotion to their favorite Pokémon Trainer—can force your opponent to put an Energy card attached to one of their Pokémon back into their hand in the Pokémon Trading Card Game?

7. In the Johto region, what Pokémon species’ tails were harvested and sold by Team Rocket?


8. Courtney and Tabitha are admins of which villainous team?

9. Which villainous team sports this logo?

10. What team was able to take over Festival Plaza in the Alola region?


12. Which team boss believed that emotions were useless and sought to destroy the entire universe so that they could start a new world?

13. The Pokémon TCG: Double Crisis expansion featured cards emblazoned with the logos of which two rival teams of villains?

14. What is the group name for the six color-coordinated peons who work together for the villainous team Cipher in Pokémon XD: Gale of Darkness?

15. In Pokémon Trozei, what is the organization that Lucy Fleetfoot and the Secret Operation League battle to rescue stolen Pokémon?

So, how well did you do? Give yourself one point for each question you got correct, then see where you land on the scale below:


0–6 points: You’re a Roughneck! You’re certainly a rough ’n’ tumble character, but you need a little more practice before you’d be able to join a true team of villains.

7–10 points: You’re a Grunt! You have enough skills to cause a fair bit of trouble, but you still have some work to do before you’d be able to make it to the big time.

11–13 points: You’re an Admin! Heroes would probably get nervous when you walk into the room thanks to your vast knowledge of nastiness.

14–15 points: You’re a Boss! Now, we’re not saying that you’re already secretly part of a villainous team, but we might keep a closer eye on our Pokémon when you’re around...


No matter how well you did, congratulate yourself on a job well done. Remember to keep checking back in to Pokemon.com for more challenging quizzes that will test your Pokémon knowledge!