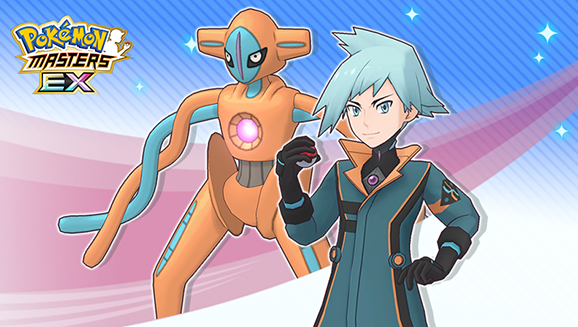 Steven is ready to show off his interstellar synergy with Deoxys, the DNA Pokémon.

The latest chapter of the villain arc is under way in Pokémon Masters EX, and Hoenn’s villains are taking center stage. Hoenn’s young heroes, Brendan and May, have already touched down on Pasio, and Sygna Suit Steven is ready to lend a hand and show off his Champion charm with his latest partner—the DNA Pokémon Deoxys. Sygna Suit Steven & Deoxys will be available to scout until August 27, 2022, at 10:59 p.m. PDT.

Sygna Suit Steven & Deoxys are a Psychic-type tech sync pair that have four different forms: Normal Forme, Attack Forme, Defense Forme, and Speed Forme. Deoxys will always begin each battle as Normal Forme Deoxys and will change its passive skills, moves, and form depending on which move is used. For example, using Attack! will change Deoxys into Attack Forme until the end of the battle, while using Faster! will change Deoxys into Speed Forme until the end of the battle.

Giovanni & Mewtwo are one of the most powerful Psychic-type strike sync pairs in Pokémon Masters EX, and teaming them up with Sygna Suit Steven & Deoxys only pushes that power even further. Try This! not only raises Sygna Suit Steven & Deoxys’s Attack, Defense, Sp. Atk, and Sp. Def by two stat ranks, but it also turns the field’s terrain into Psychic Terrain, which boosts the damage of all Psychic-type moves. This sets up Giovanni & Mewtwo to do significant damage with both Psychic and Psystrike after Mega Evolving. This combo is especially powerful in stages where terrain effects persist until changed, allowing Sygna Suit Steven & Deoxys to deal significant damage on their own. Giovanni & Mewtwo can be acquired after completing Lurking Shadow in the Legendary Adventures section of the main story.