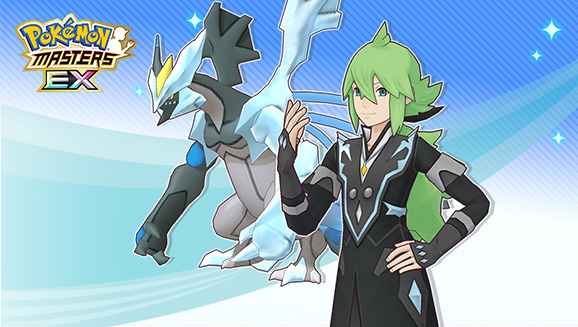 N partners with the Boundary Pokémon, Kyurem, to freeze Team Plasma in their tracks.

The Unova chapter of the villain arc is under way in Pokémon Masters EX, and Ghetsis and Team Plasma remain committed to taking over the world using whatever means it takes. Hilbert and Hilda have already partnered up with powerful Pokémon to combat their dastardly deeds, but N wants to end the saga once and for all with his new Legendary partner, Kyurem.

Sygna Suit N & Kyurem’s buddy move, B Noble Roar, slows opponents down and reduces their stats. Their sync move—World-Changing Freeze Bolt—increases in power when the target’s Attack is lowered.

N and Ghetsis have a contentious history, but these two sync pairs couldn’t be a more perfect match when teamed up together. Ghetsis & Kyurem can continually lower a target’s Attack with Noble Roar, setting up Sygna Suit N & Kyurem to devastate with World-Changing Freeze Bolt, which deals more damage when their target’s Attack is lowered. Both sync pairs also enjoy significant stat boosts thanks to their shared Ice Tech and Unova Tech theme skills. Ghetsis & Kyurem can be acquired after completing Father or Foe in the main story’s Legendary Adventures.

Unlike the fraught relationship between N and Ghetsis, Hilbert is on much better terms with N—the two even worked together to save Unova! These two sync pairs also benefit greatly when on the same team. Hilbert & Samurott can raise Sygna Suit N & Kyurem’s Attack to its maximum stat rank by using In This Together! and can raise their Speed with X Speed All, making it easier to launch attacks that would normally drain the move gauge. Both sync pairs also benefit from the Unova and Unova Adventurer theme skills, giving each other stat increases that can make all the difference in tough battles. Hilbert & Samurott are available to scout from the general pool of 5★ sync pairs, as well as from the 5★-Guaranteed Ticket Scout and 5★-Guaranteed Unova Ticket Scout.