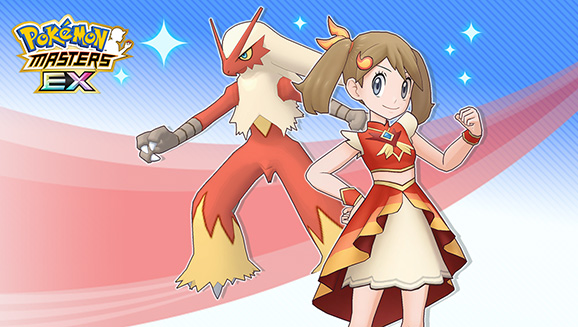 This sync pair is ready to show off their synergy with Mega Evolution on Pasio.

The latest chapter of the villain arc is under way in Pokémon Masters EX, and Hoenn’s villains are taking center stage. Luckily, Sygna Suit May is ready to save the day in her blistering new outfit alongside her partner capable of Mega Evolution, Blaziken. Sygna Suit May & Blaziken will be available to scout from July 28, 2022, at 11:00 p.m. to August 27, 2022, at 10:59 p.m. PDT.

Sygna Suit May & Blaziken are a Fire-type tech sync pair ready to burn up the battlefield with their signature move, Blaze Kick. Blaze Kick unleashes a powerful, fiery attack with a high chance of landing a critical hit as well as a small chance to burn the opponent. Sygna Suit May & Blaziken’s passive skills—Head Start 2 and Team Debut Dash 2—get the pair up and running hot, with the former reducing the user’s sync move countdown by two and the latter raising the Speed of all allied sync pairs. With Fired Up! also reducing the user’s sync move countdown by one, Sygna Suit May & Blaziken will have no problem Mega Evolving and unleashing their sync move, All About Us Blaze Kick.


Recommended Sync Pairs to Partner with Sygna Suit May & Blaziken

Blaine & Rapidash are a self-sufficient sync pair that can raise their Attack by six stat ranks with just two uses of Raging Inferno!, but they really shine when paired with other Fire-type sync pairs. Blaine & Rapidash have the move Sunny Day, which makes the weather sunny and powers up Fire-type moves for all Pokémon. Sygna Suit May & Blaziken’s Blaze Kick and sync move, All About Us Blaze Kick, are already powerful Fire-type moves, but with Sunny Day, they are certain to leave opponents scorched. Blaine & Rapidash are available to scout from the general pool of 4★ sync pairs as well as from the free Daily Scout.