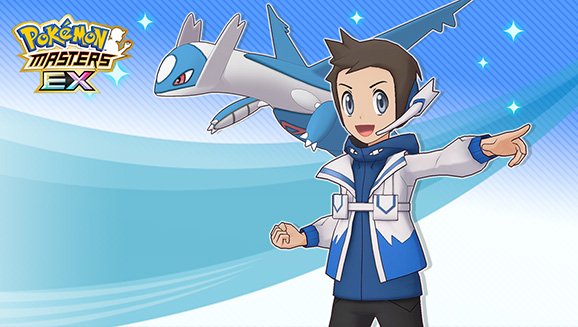 Take flight with Sygna Suit Brendan & Latios as they land on Pasio.

The latest chapter of the villain arc is under way in Pokémon Masters EX, and Hoenn’s villains are taking center stage. Luckily, Sygna Suit Brendan is here to save the day in his stylish new outfit that showcases his bond with his partner Latios, a Legendary Pokémon capable of Mega Evolution. Sygna Suit Brendan & Latios will be available to scout until August 27, 2022, at 10:59 p.m. PDT.

Sygna Suit Brendan & Latios are a Dragon-type support sync pair with the powerful Trainer move Flying Free!, which gets everyone up and running by raising the critical-hit rate of all allied sync pairs by one stat rank while also raising allies’ Sp. Atk and Sp. Def up to a maximum of four stat ranks. Luster Purge packs an unexpected punch and has a strong chance of lowering the target’s Sp. Def by two stat ranks thanks to the passive skill Unexpected Benefit 2.

May & Swampert are a flexible Water-type tech sync pair that can both help themselves and their allies with Rain Dance and their Trainer move Ready for This? As sync pairs from the Hoenn region, May & Swampert share several theme skills with Sygna Suit Brendan & Latios—namely Hoenn, Main Character, and Space Cadet. This grants both sync pairs a tidy HP bonus when they’re on the same team. Like Cyrus and Palkia, May & Swampert also benefit from Sygna Suit Brendan & Latios’s Luster Purge and Flying Free! The boosts from Flying Free! and the stat-lowering effects of Luster Purge help May & Swampert’s Muddy Water deal more damage than ever. May & Swampert are available to scout from the general pool of 5★ sync pairs as well as from the 5★-Guaranteed Ticket Scout and 5★-Guaranteed Hoenn Ticket Scout.