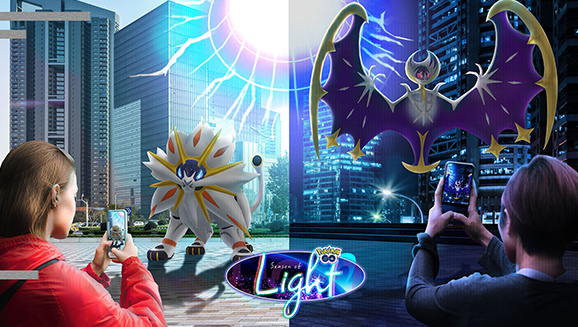 Enjoy the stellar power of Alola’s Legendary Pokémon, celestial-themed wild encounters, and avatar items that are out of this world.

Pokémon GO’s Astral Eclipse event will grace the nebula skies (and the earth below) until November 28, 2022, at 8:00 p.m. local time. Starting with this event, Trainers will be able to evolve Cosmoem for the first time in Pokémon GO! The next step of the Season-long Special Research, A Cosmic Companion, will also be unlocked, so prepare for your next adventure alongside Cosmog. Trainers can use 100 Cosmog Candy during the day to evolve Cosmoem into the Sunne Pokémon, Solgaleo, or they can use 100 Cosmog Candy at night to evolve Cosmoem into the Moone Pokémon, Lunala.

Solgaleo and Lunala represent the sun and moon, so Pokémon with ties to celestial bodies and the Pokémon Sun and Pokémon Moon video games will appear more often. Alolan Rattata, Alolan Sandshrew, Clefairy, Alolan Vulpix, Staryu, Hoothoot, Sunkern, Lunatone, Solrock, Munna, Cottonee, Petilil, and Yungoos will appear more often in the wild. Complete Collection Challenges during the event to receive Stardust that you can use to power up your Pokémon!

Whether you choose to evolve Cosmoem into Solgaleo or Lunala, you’ll be able to accessorize with your new partner with brand-new avatar items. Fly as high as the moon with Lunala Wings and Lunala Pants, or shine bright like the sun with the Solgaleo Mask and Solgaleo Shoes. A pair of nifty Starry Sky Tights will also be available to bring some cosmic style to your next outfit.

With Solgaleo or Lunala by your side, you’ll be more than ready to take on the latest Ultra Beast threat in Pokémon GO. Ultra Beast Arrival: Global will take place on Sunday, November 27, 2022, from 11:00 a.m. to 5:00 p.m. local time. Learn more about the event here.

For a full list of Pokémon that will be appearing in the wild, in raids, and as research rewards during the Astral Eclipse event, visit the official Niantic Pokémon GO blog.

Have a stellar time during the Astral Eclipse event, Trainers!