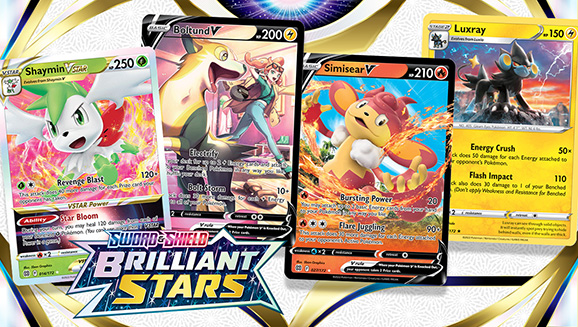 Get an early look at some of the awesome cards in the upcoming expansion, which marks the debut of Pokémon VSTAR.

The stars are coming out to shine in the next Pokémon Trading Card Game expansion, Sword & Shield—Brilliant Stars. There are over 170 cards in this latest collection, including new Pokémon V and Pokémon VMAX. Also featured are brand-new Pokémon VSTAR, which evolve from Pokémon V and come equipped with a mighty VSTAR Power, a special Ability or attack that can turn the tide of a battle. Just be aware that you can use only one VSTAR Power per game (and don't miss our earlier look at the Pokémon VSTAR gameplay mechanic, which includes a peek at Arceus VSTAR and Charizard VSTAR). Now let's take a peek at one of these new Pokémon VSTAR and a few of the other awesome cards that you can find when the Sword & Shield—Brilliant Stars expansion releases on February 25, 2022.

The Mythical Pokémon Shaymin may seem adorable, but it's looking about as fierce as it can on this Shaymin VSTAR card. Appearing in its Sky Forme, Shaymin VSTAR is ready for action with an impressive 250 HP and an attack that has the potential to do a lot of damage if you play it late in the game. With a low cost of just 1 Grass Energy and 1 Colorless Energy, Revenge Blast does a solid 120 damage on its own and another 40 damage for each Prize card your opponent has taken. So, if your opponent is down to the last of their six Prize cards, this attack will slam them for 320 damage! Not only that, but the VSTAR Power Star Bloom can revitalize your team by healing 120 damage from each Grass-type Pokémon on your Bench. When played at the right time, Shaymin VSTAR could pull you back from the brink of defeat. 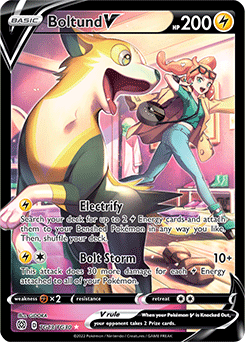 This excited-looking Boltund is part of a special subset of cards that you can find in the Sword & Shield—Brilliant Stars expansion. Dubbed the Trainer Gallery, this subset features over 20 cards that showcase a Pokémon alongside its Trainer. On this Boltund V card, we see the Pokémon getting hyped up as Sonia prepares to step out. Perhaps it's time for a walk?! As energetic as Boltund seems, it also brings that energy into battle. Its Electrify attack lets you search your deck for up to 2 Lightning Energy and attach them to your Benched Pokémon in any way you like. Not only is this a great way to power up your team, but it also boosts Boltund V's Bolt Storm attack, which does 10 damage plus an extra 30 damage for each Lightning Energy attached to all your Pokémon. Amp up your team a few times with Electrify, and Bolt Storm will give your opponents a jolt they won't soon forget. 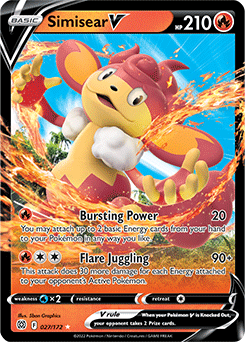 Simisear looks quite adept at controlling its flaming attack on this Simisear V card, which features two attacks that feel directly inspired by the card's red-hot artwork. Like Boltund V, Simisear V's first attack is useful for getting your team ready for battle. Bursting Power does 20 damage and also lets you attach up to 2 basic Energy cards from your hand to your Pokémon. Get some Energy cards in your hand, and your team will be ready to go in no time. Simisear V's Flare Juggling burns extra bright if your opponent has been powering up, too. This attack does 90 damage on its own, plus 30 more damage for each Energy attached to their Active Pokémon. 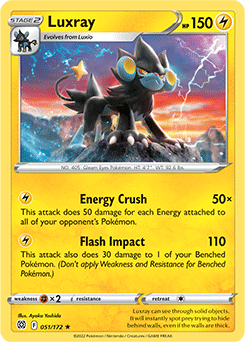 Standing defiantly atop a rocky peak, Luxray is ready to take on all that dare to oppose it. The steely look in its eyes hints at the power it's ready to unleash with its Energy Crush. For the cost of just 1 Lightning Energy, this attack does 50 damage for each Energy attached to your opponent's Active and Benched Pokémon. Like Simisear V above, the more your opponent has prepared for battle, the more damage they'll suffer when going up against Luxray. If you need an attack that doesn't rely on your opponent, Luxray's Flash Impact attack hits for 110 damage for the same cost of 1 Lightning Energy. Just be aware that this attack will also do 30 damage to 1 of your Benched Pokémon. 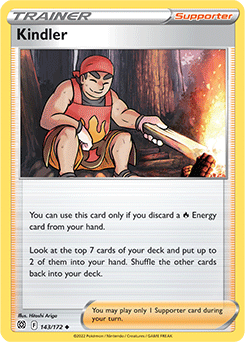 Is your Pokémon TCG game heating up? Want to get some hot new cards out of your deck and into your hands? Playing a Kindler card could get you what you're looking for. This card lets you look at the top 7 cards of your deck and put up to 2 of them into your hand. If the cards are favorable, you'll find one that matches your need. However, just as the Kindler keeps a flame fed by adding a log to the fire, you'll also have to discard a Fire Energy card from your hand to use this Supporter card.

This, of course, is just a sampling of the cool cards in the upcoming Pokémon TCG: Sword & Shield—Brilliant Stars. See what else you can discover when the expansion releases on February 25, 2022.