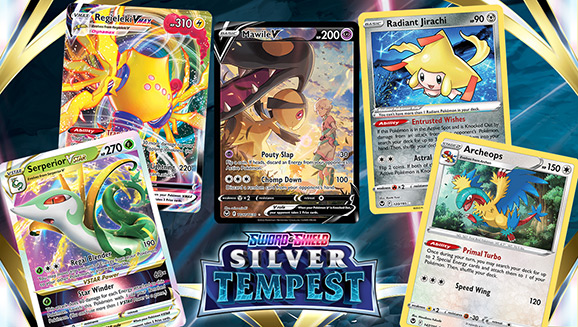 Learn about some of the exciting new cards coming in the latest expansion.

A storm is brewing in the upcoming Pokémon Trading Card Game: Sword & Shield—Silver Tempest expansion—numerous cards are poised to throw the game into turbulence with their unique Abilities and powerful attacks. This expansion also includes brand-new Radiant Pokémon, more Pokémon VSTAR and Pokémon V, and a single enormous Pokémon VMAX. There are also 30 cards with special artwork in the Trainer Gallery subset. 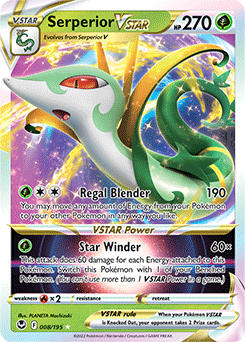 Get excited for the return of this superior Pokémon from the Unova region! Making its first appearance since XY—Fates Collide, Serperior packs a serious punch as a Pokémon VSTAR. Its Regal Blender attack does a solid 190 damage and lets you move Energy around among your Pokémon in any way you like. You can use Regal Blender to help set up its VSTAR Power, the Star Winder attack, which does 60 damage for each Energy attached to Serperior VSTAR. Stack your Energy together and prepare a powerful attack with serious one-shot potential. 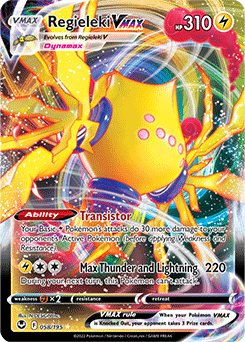 Storm the board with an electrifying Pokémon VMAX that strikes faster than lightning. Regieleki VMAX is the ultimate conductor for your Lightning-type deck, with its Transistor Ability increasing your Basic Lightning-type Pokémon’s attacks by 30 damage against your opponent’s Active Pokémon. It works perfectly with its smaller counterpart Regieleki from Sword & Shield—Evolving Skies, boosting the Teraspark attack to 150 damage. Regieleki VMAX is no slouch, either—it can do 220 damage on its own with Max Thunder and Lightning. During your next turn, Regieleki VMAX won’t be able to attack, but that’s no problem with a free Retreat Cost that allows it to pivot out of the Active Spot with ease. 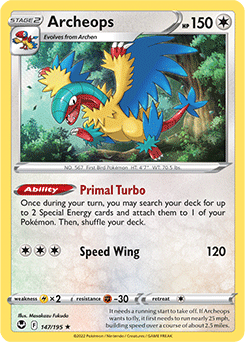 Archeops is famous for having powerful Abilities in the Pokémon TCG, and this one is no different, with its Primal Turbo Ability to accelerate up to 2 Special Energy cards from your deck onto 1 of your Pokémon at a moment’s notice. This includes Twin Energy and Double Turbo Energy, which means Archeops can effectively attach up to four Energy in a single turn! As a Stage 2 Pokémon, Archeops can be difficult to get into play quickly enough to have an impact, so using Rare Candy to evolve it directly from Unidentified Fossil is a key strategy in getting the most out of this card. 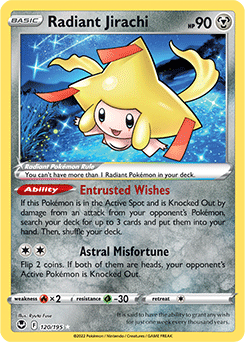 Protect valuable Pokémon on your Bench and wish upon a star with Radiant Jirachi! If this Pokémon is in the Active Spot and is Knocked Out by damage from an attack from your opponent’s Pokémon, search your deck for up to 3 cards and put them into your hand. Radiant Jirachi functions well as a support Pokémon that can sit in the Active Spot while more important attackers sit on the Bench, taking a hit and granting you whatever you might need to establish your strategy and achieve victory. You may even be able to take an unexpected Knock Out with its Astral Misfortune attack if you’re feeling lucky—or your opponent is unlucky. Flip 2 coins, and if both of them are heads, your opponent’s Active Pokémon is Knocked Out. 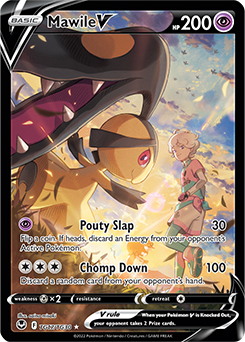 Mawile makes its Pokémon V debut in Sword & Shield—Silver Tempest, and it’s ready to punish unruly opponents with a pair of disruptive attacks that match the cadence of Galar’s proud and brassy Trainer Bede, who is featured taking a stroll alongside Mawile (and Opal) in the artwork. Mawile V’s Pouty Slap does 30 damage, and if you flip heads, it discards an Energy from your opponent’s Active Pokémon. You’ll also be able to take a bite out of your opponent’s resources with the Chomp Down attack, which does a solid 100 damage for three Energy and discards a random card from your opponent’s hand. Whittle down your opponent and set your board up for success with the Deceiver Pokémon by your side!

These are just some of the over 190 cards that can be found in the upcoming Pokémon TCG: Sword & Shield—Silver Tempest expansion. You’ll encounter plenty more incredible cards when the expansion releases on November 11, 2022.