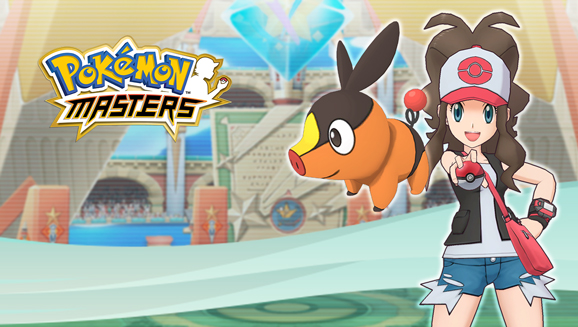 Experience a new story event and engage in an exciting EX Challenge.

Get ready for new events coming to Pokémon Masters this month! Check out a host of great stuff, including a brand-new story event, an EX Challenge against Korrina and Lucario, and a pair of ongoing events involving Hilbert and Oshawott and the Water-Type Training Event.

The new story event is entitled The Girl in Black and White, and it stars the sync pair Hilda and Tepig. You may remember Hilda as one of the player characters from Pokémon Black Version and Pokémon White Version. This sync pair is available to scout with increased offering rates through October 16, 2019. And stay tuned for even more exciting missions coming later this month!

Additionally, a new EX Challenge featuring Korrina has been added to the co-op training area. Take on Korrina and her sync pair partner, Lucario. If you defeat them, you can earn Fire-type gear. But Korrina and Lucario had better watch out—they're a Fighting-type sync pair that is weak against Fire-type sync pairs, so they're in trouble if they go up against Hilda and Tepig. Remember that you'll need to clear Chapter 18's co-op battles on Hard to unlock EX Challenges.

There are a couple of ongoing events that will continue until October 7, 2019, at 10:59 p.m. PDT. Hilbert and Oshawott are still available in their sync pair scout event, so you have an increased chance of teaming up with this sync pair for a limited time. Meanwhile, the Water-Type Training Event allows Water-type sync pairs to gain extra XP while completing special battles. You'll also collect vouchers in co-op play that can be exchanged for helpful items.

If you've previously purchased the discounted monthly gem set, you will be able to purchase it again starting October 1. Please note that the other limited-purchase sets will not be available if you've already purchased those.