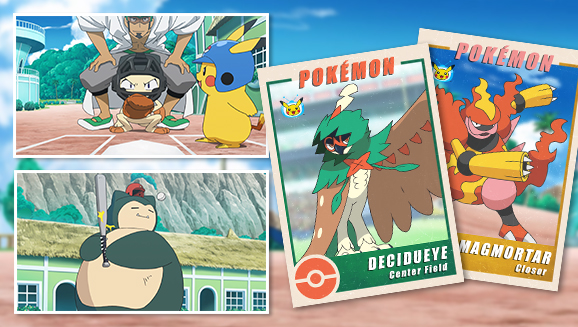 We’ve scouted out the best Pokémon to form a pennant-worthy baseball team!

Right now, Pokémon TV is showing “Pulling Out the Pokémon Base Pepper!” It's a fun episode from the most recent season of Pokémon the Series that shows Ash and friends playing Pokémon Base, an Alola region take on baseball. So we thought it would be a fun time to choose Pokémon to build our own baseball team! It wasn't easy to pick the right mix of Pokémon to put together a powerhouse lineup, but we think our all-star selections could win quite a few games!

Our team is managed by Drampa, along with Probopass and the always-instructive Oranguru to help with coaching duties. We've tapped Komala and Oricorio (Pom-Pom Style, naturally) to help lead the fans in cheers. And Palossand and Castform pitch in to keep the field in game-day shape—Castform can even knock the clouds away in case of a rain delay! We even looked for roles for Garbodor and Guzzlord, but we couldn't pull them away from the concessions stand long enough. (You can't win 'em all.)

Have any comments about our team, or other Pokémon you'd like to recommend? Use #PokemonBaseballTeam on social media to yell at us from the stands. Play ball! 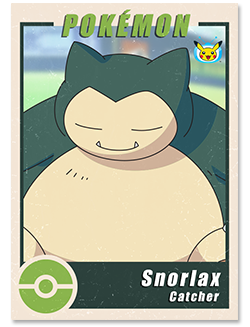 When it comes to blocking the plate, the immense Snorlax is a natural. Pitchers can be as wild as they want without worrying about a ball getting all the way to the backstop. We only wonder how the poor umpire will be able to call balls and strikes standing behind Snorlax's massive frame. And if Snorlax is unable to play (perhaps it's still snoozing from an extra-innings game the night before), Bastiodon always has its catcher's mask on and is ready to play at a moment's notice. 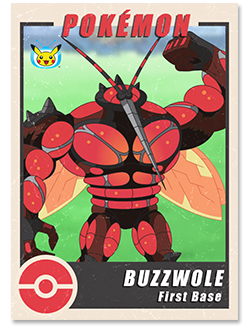 It takes only one look at the hulking Buzzwole strolling up to the plate for pitchers to start quaking in their sneakers. And even though defense isn't the most important aspect of playing first base, this Ultra Beast has the height to snag off-target throws from its infield teammates. 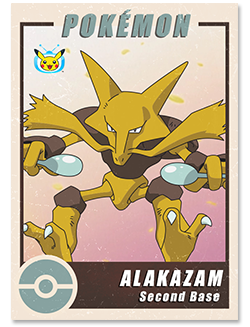 Perhaps it's the quick hands from juggling spoons, or the telepathic ability to know what's going on in the hitter's mind, but Alakazam has all the tools to play second base. Keep a close eye on Alakazam when a ball is hit its way—the Psychic-type Pokémon seems to be able to teleport from base to base to convert easy double plays. 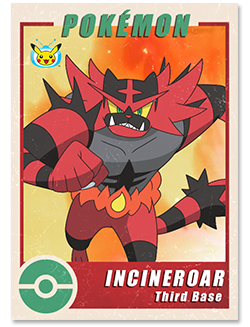 They call third base the hot corner, so what better Pokémon to put there than the fierce Incineroar? This Pokémon might not have the speed to play the outfield, but it has the power to anchor any lineup. And judging by its championship wrestling belt, Incineroar is already a proven winner in other arenas. 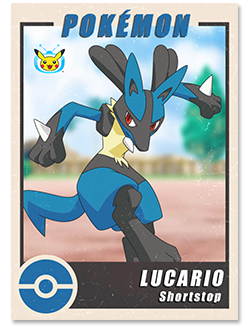 A good shortstop is athletic and quick and won't make mistakes when the pressure's on. Lucario checks every box, making this one of our easiest choices. When the game is on the line and the ball is hit Lucario's way, you know it'll find the Inner Focus to make the play without flinching. 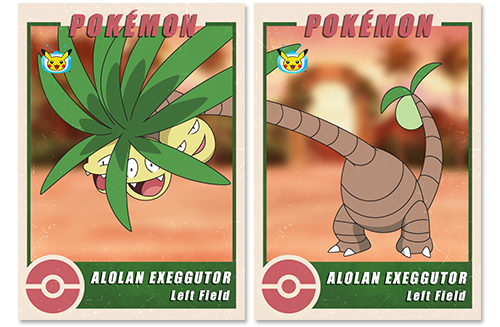 Nicknamed “the Green Monster” by its teammates, the towering Alolan Exeggutor is uniquely capable of robbing home runs in left field. With little effort, Alolan Exeggutor can pull down even the most mammoth moonshots that head its way. There are some concerns about Alolan Exeggutor's offensive capabilities given its enormous strike zone. 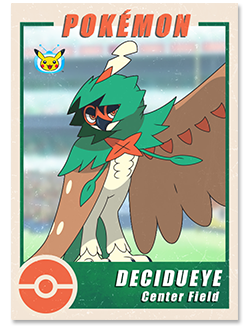 It seems unfair to put a Flying-type Pokémon in the outfield, so we went with the winged Decidueye instead. This Grass and Ghost type loves roaming the expanses of center field, and while it can't use Fly, its wings can help it snag those fly balls. Haunter just barely missed the cut in center field thanks to Decidueye's better arm strength…er, wing strength. 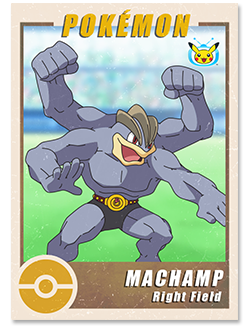 If wearing one glove is good, wearing three has to be way better, right? If that's the case, Machamp has right field covered. This Pokémon will probably play error-free baseball for its entire career. Better yet, we don't remember seeing any rule that says you can't step into the batter's box with two baseball bats—good luck striking this Pokémon out. 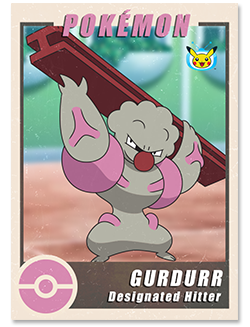 It's not native to the Alola region, so Gurdurr is something of an international signee. But you can see why the coaches and fans love the Muscular Pokémon: it carries its own enormous bat wherever it goes. We're not sure if a giant steel beam is actually regulation legal—perhaps Gurdurr got used to using the metal bat during its college days.

It's always nice to have that one player on your bench who can cover for any other player in a pinch, and on our team, the obvious choice is Ditto. In this role, the Transform Pokémon really lives up to its billing, able to fill in for anyone on the field. Just don't expect to find this Pokémon in the starting lineup anytime soon—shapeless blobs tend not to make good baseball players.

Need a bat off the bench? With bat already in hand and helmet in place, Cubone is always ready to step into the batter's box at a moment's notice. And if that time never comes—well, Cubone is known as the Lonely Pokémon, so it probably won't mind hanging out by itself in the dugout until it finally gets its chance to hit.

When speed is what you need, the Ultra Beast Pheromosa is the one to turn to. Pheromosa's speed is off the charts, faster than just about any other Pokémon you could put on the paths. But after Pheromosa's work is done stealing bases, don't expect it to do much in the field—its defense is about as terrible as its speed is phenomenal. 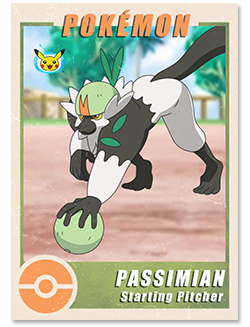 When you're looking for a Pokémon to pitch, why not go with the one who already has its own ball? Passimian is a crafty lefty who knows how to deliver in big moments. And as the Teamwork Pokémon, you can be assured that Passimian will be a good clubhouse presence.

If Passimian is showing a little fatigue, there are a bunch of Pokémon that are ready to take the mound in relief. Poliwrath and Riolu have the proper mechanics to deliver great pitches, but it's really Electabuzz who has truly electric stuff. It must be nice for the manager to look down at the Tauros pen and know any of the Pokémon down there can step into the action. 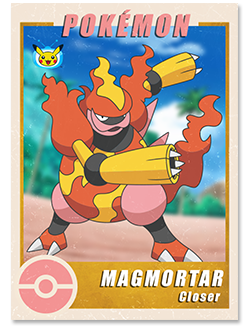 Looking for a pitcher who can throw straight heat? Turn to Magmortar, a Pokémon with a literal cannon for an arm. When the game is on the line and you absolutely need to knock out...er, strike out…the competition, Magmortar is a Pokémon you can turn to without hesitation.


That's our powerhouse Pokémon baseball team! Think you can construct a better squad? Use #PokemonBaseballTeam on social media to share your lineup with the world! And remember to catch “Pulling Out the Pokémon Base Pepper!” and other exciting episodes from the latest season and beyond on Pokémon TV!