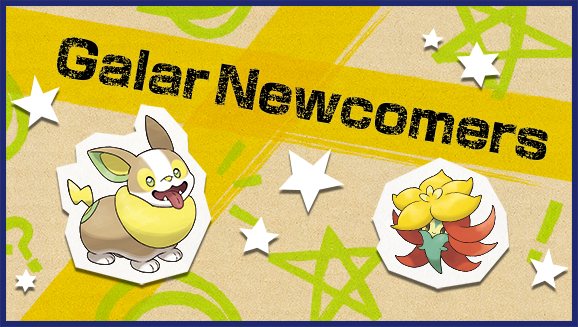 The second Pokémon Sword and Pokémon Shield Online Competition, Galar Newcomers, is accepting registrations starting Wednesday, January 15, 2020, at 10:00 p.m. PST. In this Double Battle competition, you'll be permitted to include only Pokémon first discovered in the Galar region and Galarian forms of previously discovered Pokémon on your team. Show off what you've learned from your first Galar battles by composing a team of your newest allies. Has your training revealed the best new battling tricks?

Just like with most other Online Competitions and Ranked Battles, there'll be a few other additional rules. All Pokémon will become Lv. 50 for the duration of each battle. No two Pokémon in your Battle Team can hold the same item. Certain special Pokémon will not be permitted, including Zacian and Zamazenta. And this time, you will be permitted to use any of your Pokémon with the Gigantamax Factor, and they'll be able to Gigantamax in battle!

Make sure to compete, whether you're a newcomer or a veteran, because you'll get a tidy reward of 50 Battle Points just for participating in at least one battle, win or lose. You'll need to sign up before the competition starts in order to participate, so don't delay. Good luck in your battles!