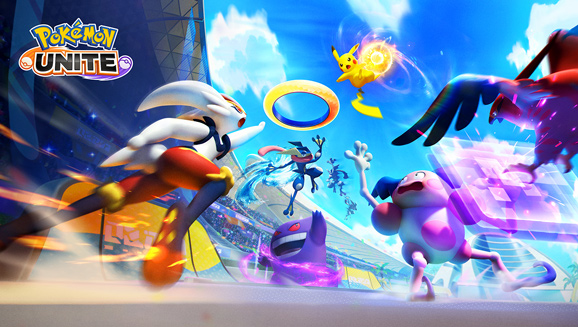 Form teams of five for Pokémon battles unlike any you’ve experienced before.

Get ready for a new kind of Pokémon battle with the July release of Pokémon UNITE on Nintendo Switch, followed by a September release on mobile devices. Pokémon UNITE is a strategic team battle game in which players compete in 5-on-5 team battles. To win, you’ll have to strategize with your teammates to defeat wild Pokémon, level up and evolve your own Pokémon, and knock out your opponents’ Pokémon. The team with the most points at the end of the match wins!

Cross-platform play between Nintendo Switch and mobile devices is planned, which will allow players to fight together and against one another. Additionally, if you log in using your Nintendo Account or Pokémon Trainer Club account, you’ll be able to use your game data on any device. With this feature, you can enjoy playing Pokémon UNITE at home on your TV screen using the Nintendo Switch version or on the go using the mobile version.

Look forward to battling in Pokémon UNITE in French, Italian, German, and Spanish later this year.

Can’t wait to unite, battle, and win? Get more information about Pokémon UNITE at the official site!