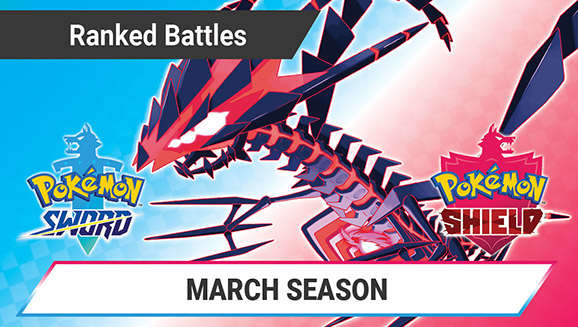 A new Ranked Battles season has begun! The Pokémon Sword and Pokémon Shield leaderboards reset at the beginning of each month, making it the perfect time to dive in. The Ranked Battles March 2022 Season (Season 28) will follow the Series 12 regulations, which means you can battle with up to two powerful, usually ineligible Legendary Pokémon at your side. Also, Pokémon are allowed to Dynamax or Gigantamax, increasing the potential drama of each new battle. See below for the full list of eligible Pokémon.

Pokémon Sword and Pokémon Shield Ranked Battles offer the opportunity to test your skills as a Trainer in head-to-head battles with players around the world, move up the global leaderboards, and earn helpful in-game rewards. The Ranked Battles March 2022 Season (Season 28) will run until 4:59 p.m. PDT on March 31, 2022.


Up to two of the following special Pokémon may be registered to your Battle Team:

Before battle, you'll be matched up with other players of similar rank to ensure even competition. The higher the tier you finish in, the greater your in-game rewards after the season concludes. The March 2022 season rewards include the following: