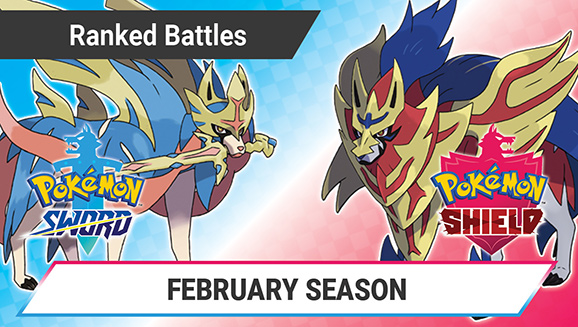 Add the might of one usually restricted Legendary Pokémon to your party in this month’s battles!

You have a tough decision to make in the Ranked Battles February 2021 Season: Which powerful, usually ineligible Legendary Pokémon will you choose to help lead your team to victory? With the Series 8 rules in effect, you can add just one of these strong contenders to your team, so choose wisely from among the following Legendary Pokémon: Mewtwo, Lugia, Ho-Oh, Kyogre, Groudon, Rayquaza, Dialga, Palkia, Giratina, Reshiram, Zekrom, Kyurem, Xerneas, Yveltal, Zygarde, Cosmog, Cosmoem, Solgaleo, Lunala, Necrozma, Zacian, Zamazenta, Eternatus, and Calyrex.

Pokémon Sword and Pokémon Shield Ranked Battles allow you to test your Trainer skills in head-to-head battles with players around the world, move up the global leaderboards, and earn helpful in-game rewards. Good luck battling in the Ranked Battles February 2021 Season!

You will need to finish at least one match with a win or loss during the February 2021 Season to be eligible for rewards at the end of the season.