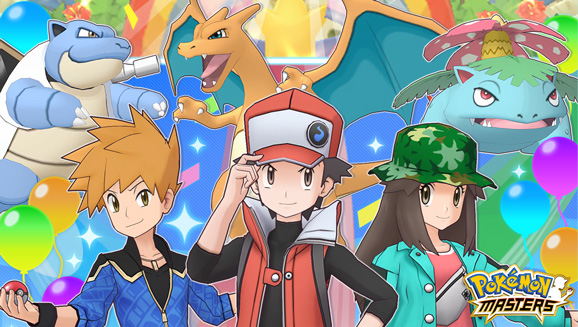 Commemorate a year of fun with 6★ EX sync pairs and the Kanto Challenge in the new Champion Stadium.

Pokémon Masters is one year old, and to celebrate this auspicious milestone, a wide variety of exciting new features that players will love are coming. These include the addition of 6★ EX sync pairs, the new Champion Stadium, some awesome debuts in the sync pair scout, and last but not least, a title change to reflect all the additions and enhancements that the game has received this past year. That's right, Pokémon Masters is now Pokémon Masters EX! Players will even receive 3,000 gems when they log in to the game, so don't forget to claim your special gift. Before that, though, check out some more details about the new updates accompanying Pokémon Masters EX.

One big change to the game that's sure to affect your team and battle strategies is the ability to strengthen your sync pairs beyond 5★ up to 6★ EX, which you can do once you've trained a 5★ sync pair to meet certain conditions. This, of course, will make that sync pair even more formidable in battle. Raising a sync pair to 6★ EX will also boost their sync move, which could spell big trouble for your opponents.

Not only that, but 6★ EX sync pairs will also get a different-colored outfit to wear during battle to show off their newfound status. Don't worry if you're attached to your Trainers' original outfits, though—you can freely switch between their classic and 6★ EX duds.

Having a powerful team will serve you well when you take on Pokémon Masters EX's new Champion Stadium. Here, you'll face off against some of your toughest opponents yet. Initially, you'll find the Kanto Challenge, where you'll battle the Kanto region's Elite Four and the Champion of the Kanto Pokémon League, Blue.

When entering the Champion Stadium, you'll assemble 15 sync pairs to compete in five consecutive 3-on-3 battles. You can take on the Elite Four members in any order you wish, and once they've all been defeated, it's time to face the Champion. However, once one of your sync pairs has participated in a battle, they cannot join in any of the remaining battles. You'll need to plan carefully to ensure that you have the best possible team to counter your opponents' strengths.

Competing in the Champion Stadium can earn you items needed to raise your sync pairs to 6★ EX, and each week you will be able to compete in these battles to collect more of these useful items.

There are two difficulty levels to the Champion Stadium: Normal and Hard. Most players should be able to enjoy the Normal battles, while Hard battles should give experienced players a suitable challenge. Furthermore, the Champion Stadium won't be limited to a set period of time, and the Pokémon and type weaknesses of the Elite Four and Champion will change every week when playing on Hard. Want a quick tip to help you prepare for the Kanto Challenge? In the first group of Hard battles, you'll find that Fire-, Water-, Grass-, Ghost-, and Dragon-type attacks will be most effective. Good luck, Trainers!

Some new sync pairs have also arrived in Pokémon Masters EX to join the one-year anniversary celebration. From August 27, 2020, to September 27, 2020, Sygna Suit Blue & Blastoise and Sygna Suit Leaf & Venusaur will be making their debut in the game. Sygna Suit Red & Charizard have also returned in case you missed out on this popular sync pair during their initial appearance. All three of these 5★ sync pairs will make incredible additions to your team—especially once you train them to 6★ EX.