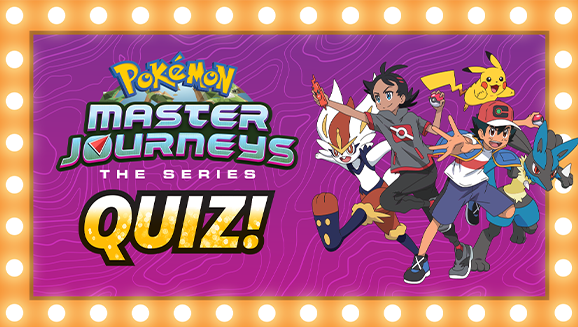 From exciting Evolutions to riveting research projects, test your recollection of Part 2 before diving into Part 3.

Give yourself one point for each correct answer. Grade your score at the end of the quiz.


1. In Episode 14 (“Not Too Close for Comfort!”), Goh's Sobble romps across Cerise Park, practicing its Water Gun attack. Since its encounter with the actress Jacqueline and her Inteleon in Episode 6—“Sobble Spies a Stealthy Strategy!”—Sobble has been training hard in the hope of one day becoming like Inteleon. Suddenly, Sobble evolves into Drizzile, surprising both the Pokémon and Goh. But Drizzile isn't happy—it wanted to evolve into Inteleon instead. Just before Sobble evolves, it saves which Pokémon from getting hit by a falling Sitrus Berry?

2. In Episode 15 (“On Land, in the Sea, and to the Future!”), Chloe and Eevee travel to Hoenn to meet Kiley and his Vaporeon. Chloe and Eevee want to learn as much about every Eevee Evolution as possible before deciding which one is right for them. Along with Ash, Goh, and their Pokémon, Chloe and Eevee compete in the Pokémon Marine Athletic Race. Eevee has a blast with its new Vaporeon friend. At the end of their visit, what does Kiley give Chloe?

3. Ash and Goh travel to Lavaridge Town—where the residents are in crisis—in Episode 16, “Absol Absolved!” The hot springs have dried up, and the townspeople are accusing Absol of being the cause. Ash and Goh eventually discover that a lost Snorunt and some Glalie were the real culprits—they caused the hot springs to dry up by freezing the nearby mountain. Goh catches Absol, and the team enjoys a well-earned dip in the restored hot springs. But which Pokémon Trainer who originally appeared in Pokémon Journeys: The Series reached out to Ash and Goh for help?

4. In Episode 17 (“Thrash of the Titans!”), Iris sends Ash a letter challenging him to a Pokémon World Coronation Series battle in Opelucid City. Ash and Goh travel to Unova, where Ash discovers that Iris is now the region's Champion! Iris sends out her intimidating Dragonite, followed by her powerful Haxorus. Ash's Pokémon triumph in the end, raising Ash's World Coronation Series ranking into the Ultra Class. Which two Pokémon does Ash use to defeat Iris?

5. In Episode 18 (“Under Color of Darkness!”), Goh's Flabébé enjoy a spirited race in Cerise Park. But Goh notices that one of them is missing a petal on its flower, so they travel to Kalos to look for a replacement. They begin their hunt in Shalour City. Though it takes some time, they ultimately find a suitable flower, and Flabébé evolves into Floette. It decides to stay in the wild to watch over the flowers. Ash and Goh bid Floette a sad farewell before returning to Vermilion City. What color is the flower Flabébé needs to replace?

6. In Episode 19 (“Sleuths for Truth!”), Vermilion City is in chaos because someone has been stealing large quantities of electricity. Officer Jenny and Inspector Decker are on the case! Inspector Decker thinks he's found the culprit, but Ash and Goh disagree. The group ultimately uncovers the real culprits: Team Rocket. But which Pokémon does Inspector Decker initially take to the police station for questioning?

7. In Episode 20 (“Advice to Goh!”), Ash and Goh travel to Pallet Town to visit Professor Oak's Laboratory. There, Professor Oak tells Ash and Goh about a special research initiative called Project Mew. Goh declines to participate until Ash's old rival Gary manages to taunt Goh into agreeing to give it a shot. Gary had traveled to Kanto to collect what as part of his test for Project Mew?

8. In Episode 22 (“Take My Thief! Please!”), Team Rocket is being terrorized by a Morpeko that eats all their food. Since they haven't officially caught it, Jessie decides that James should lead Morpeko into the wild so it would be unable to find its way back to their hideout. James and Morpeko bond along the way, and Morpeko eventually makes its way back to the rest of the Team Rocket group. Ultimately, James decides to catch Morpeko and add it to the team. What food does Morpeko offer James that changes his feelings and causes them to bond?

9. In Episode 23 (“Leaping Toward the Dream!”), Goh and Ash travel to Mt. Coronet in the Sinnoh region for Goh's first Project Mew assignment. A team member named Danika tells Goh that if he wants to take part in Project Mew's biggest quest—searching for Mew on Table Mountain—he'll have to earn points by participating in trial missions. She then gives him a task: catch a certain Pokémon on Mt. Coronet. Goh successfully finds and battles the Pokémon, but not without challenges. Ultimately, Goh manages to earn the Pokémon's trust and catch it, promising to return it to its home in Alola. Which Pokémon was Goh tasked with catching?

10. In Episode 24 (“Everybody's Doing the Underground Shuffle!”), Ash, Goh, and Chloe travel to Driftveil City to follow up on a rumor about a potentially new Pokémon. The lead turns out to be false—and to make matters worse, they get separated in an underground cave along with Team Rocket. Disoriented and unable to find their original traveling companions, our heroes and Team Rocket form new groups, prompting some unexpected friendships to form. Meowth is so moved by the experience, he decides to leave Team Rocket. Which Pokémon Trainer does Meowth want to be caught by?

11. In Episode 26 (“Nightfall? Nightmares!”), Chloe discovers that her parents are too busy for their family vacation, so she and Eevee decide to travel to Sinnoh on their own. Meanwhile, Ash and Goh also travel to Sinnoh following reports that people in the area are being plagued by nightmares. Chloe decides to walk to Eterna City to watch her first Pokémon Contest, and while camping along the way, a Pokémon flies headfirst into her cooking pot! The Pokémon's Trainer appears, and unbeknownst to Chloe, this Trainer used to travel with Ash. The pair agree to travel to Eterna City together before discovering an injured Cresselia in the forest. Which of Ash's travel companions does Chloe meet?

12. In Episode 27 (“A Midsummer Night's Light!”), Chloe and her new friend Dawn work to heal the injured Cresselia they found. Darkrai arrives in the forest, and Chloe is initially concerned that it might try to injure Cresselia. Team Rocket spots Darkrai from their balloon and decide to catch it. Ash and Goh appear, thrilled to reunite with Chloe and Dawn. Darkrai sends Team Rocket blasting off yet again, but then a different, more menacing-looking Team Rocket airship lands. Our heroes, along with Darkrai and the still-injured Cresselia, manage to chase off the Team Rocket members. Cresselia and Darkrai fly back to Fullmoon Island and Newmoon Island. Which Team Rocket member leads the group that arrives in the airship?

How well do you know Part 2 of Pokémon Master Journeys: The Series? Give yourself one point for each correct answer. Add up your points and see how you did in the chart below:


0–4 points: You're battling in the Normal Class! If you want to advance, get some training in by heading over to Netflix to rewatch Part 2 before taking the quiz again.

5–7 points: You've reached the Great Class! You're moving up in the ranks, but you've still got a ways to go. Brush up on Part 2 before trying again.

8–10 points: You've battled your way to the Ultra Class! You know a lot, but if you want to reach the top of the leaderboard, you know what you have to do.

11–12 points: Congratulations on making it to the Master Class! You've mastered Part 2 of Pokémon Master Journeys: The Series! Now it's time to enjoy Part 3.


Part 3 of Pokémon Master Journeys: The Series will be available on Netflix starting May 26.