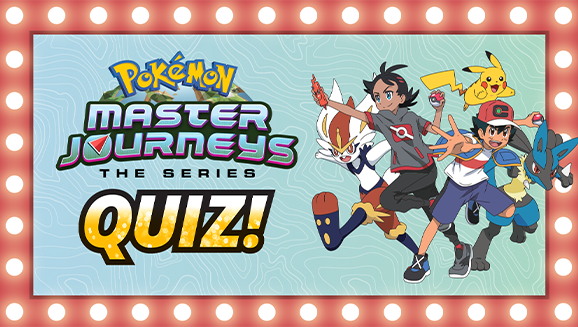 Test your knowledge of everything that happened in Part 1 before watching Part 2 on Netflix, starting January 21.

The second installment of Pokémon Master Journeys: The Series hits Netflix on January 21. This 15-episode set promises many more amazing adventures, Pokémon pals, brilliant battles, valorous victories, and quality quests. Join Ash and Goh as they continue their work as research assistants at Cerise Laboratory in Vermilion City while furthering their goals of climbing to the top of the World Coronation Series and catching one of every kindof Pokémon. But before diving into Part 2, test your knowledge with one question from each of the first 12 episodes with this Pokémon Master Journeys: The Series quiz and recap. How well do you remember the events from Part 1? Find out below!


1. Chloe officially becomes a Pokémon Trainer after catching which Pokémon?

2. Which two Fossil Pokémon do Ash and Goh catch after a fierce battle in Galar's Wild Area?

3. Ash's Galarian Farfetch'd dreams of becoming what type of master?

4. Which two kinds of Pokémon are interfering with work on Laxton Farm?

5. Which Legendary Pokémon are the Pokémon hunters trying to catch by polluting a lake in Johto?

6. Which Bug-type attack does Sobble learn while it battles Team Rocket after they attempt to steal an Inteleon?

7. Which two Pokémon does Chloe travel to Glimwood Tangle to meet?

8. What does Ash do to finally earn the loyalty of his Farfetch'd?

9. Cerise Laboratory research assistant Chrysa is obsessed with which Pokémon?

10. What attack do Ash and Goh use to save themselves when they're trapped in a giant pile of Gulpin that's flying through the sky?

11. After a dream about Rillaboom, Goh wakes up to find which unfamiliar Pokémon in his room?

12. Ash's Farfetch'd evolves into Sirfetch'd while battling which Trainer and Pokémon?

How well do you know Part 1 of Pokémon Master Journeys: The Series? Give yourself one point for each correct answer. Add up your points and see how you did in the chart below:


0–4 points: You've taken the most important step by starting your Pokémon Master Journeys adventure. Now hop over to Netflix to rewatch Part 1 before diving into Part 2.

5–7 points: You've made progress on your journey, but you've still got some training to do before you can call yourself a Leek Master. Brush up by watching the episodes you're the least confident about.

8–10 points: So close! You clearly paid attention to the first 12 episodes. Give it another try to see if you can get a perfect score.


This is just a taste of the friendships, adventures, and challenges in Pokémon Master Journeys: The Series! Don't miss Part 2 of the series, available on Netflix on January 21.