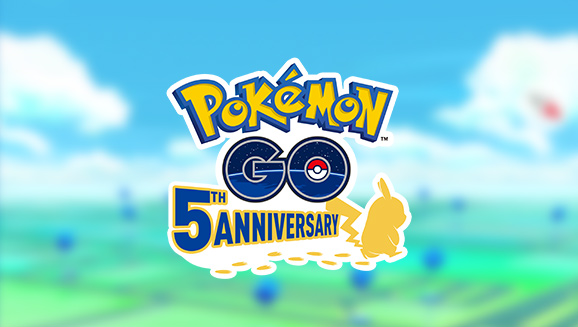 Celebrate five years of fun with Flying Pikachu and its 5-shaped balloon, First Partner Pokémon, and lots of great bonuses.

Trainers all over the world have been enjoying Pokémon GO for five years, and we're celebrating that landmark with an event that features special Pokémon encounters, loads of First Partner Pokémon, and some cool bonuses. From Tuesday, July 6, 2021, at 10:00 a.m. to Thursday, July 15, 2021, at 8:00 p.m. local time, you can join the celebration!

Open a Mystery Box during this anniversary event for a chance to encounter a Shiny Meltan!

It's hard to celebrate a Pokémon milestone without acknowledging the Pokémon that often accompany Trainers at the start of their journeys. This anniversary event will feature appearances by all the First Partner Pokémon that were originally discovered in regions currently represented in Pokémon GO. Bulbasaur, Charmander, Squirtle, Chikorita, Cyndaquil, Totodile, Treecko, Torchic, Mudkip, Turtwig, Chimchar, Piplup, Snivy, Tepig, Oshawott, Chespin, Fennekin, and Froakie will all be appearing as reward encounters for completing Field Research. Not only that, but First Partner Pokémon will also be attracted to active Lure Modules on occasion, and you might even encounter some in the wild.

You can also encounter First Partner Pokémon by completing certain Field Research tasks. Try to catch all of them to complete the event's Collection Challenge! Doing so will earn you an encounter with Flying Pikachu with a 5-shaped balloon and a massive amount of Poké Balls.


The Sky's the Limit

There's so much excitement about Pokémon GO's fifth anniversary that even the skies are lighting up! The fireworks celebration we saw during last year's Pokémon GO Fest is returning, so keep an eye on the map for some festive fun. While you're watching the skies, be sure to take note of the new real-time sky mechanic. This previously announced feature will be available for everyone just in time for the anniversary, along with additional Pokédex classifications.

There's even more excitement in store during this anniversary event! All Lure Modules will last a full hour, including the Glacial, Magnetic, Mossy, and Rainy Lure Modules. Item storage limits will also increase by 500 at the beginning of the event. If you need more storage before the celebration begins, be sure to grab an upgrade in the shop.

There will also be special fifth-anniversary Gift Stickers available from PokéStops, Gifts, and the shop, so you can spread some anniversary cheer to your friends.

It's been an incredible five years in Pokémon GO, so have lots of fun celebrating your adventure during this fifth-anniversary event!